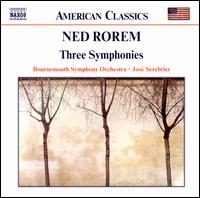 Famously unapologetic for bucking the avant-garde, Ned Rorem was largely ostracized by the new music intelligentsia of the 1950s, and his three symphonies from that decade were unfairly neglected. They remained so, even when neo-Romanticism became fashionable again toward the end of the twentieth century. This 2003 release from Naxos at last gives these remarkable symphonies the attention and care they deserve. José Serebrier and the Bournemouth Sinfonietta go to extraordinary lengths to convey both the vigor and lyricism ... Read More

Famously unapologetic for bucking the avant-garde, Ned Rorem was largely ostracized by the new music intelligentsia of the 1950s, and his three symphonies from that decade were unfairly neglected. They remained so, even when neo-Romanticism became fashionable again toward the end of the twentieth century. This 2003 release from Naxos at last gives these remarkable symphonies the attention and care they deserve. José Serebrier and the Bournemouth Sinfonietta go to extraordinary lengths to convey both the vigor and lyricism of these pieces, and render them with the balance and clarity that are constants in Rorem's work. The Symphony No. 3 is the most fully realized, and resilient rhythms and cogent structures give this work its backbone. Yet it also has room for lush orchestration and gorgeous melodies, the sine qua non of Rorem's emotionally compelling style. Serenely lyrical, the Symphony No. 1 is the gentlest of the three, and expansive, song-like lines dominate throughout, even over the... Read Less

In 2003, in celebration of the composer's 80th birthday, Naxos released as part of its "American Classics" series a collection of three early symphonies by Ned Rorem beautifully performed by Jose Serebrier conducting the Bouremouth Symphony Orchestra. Serebrier also wrote the informative liner notes for this release, with comments on each symphony provided by Rorem.

The CD was received with deserved interest and accolades, as Rorem's orchestral music, particularly the symphonies, had been little-known and little recorded. Prior to this CD, Naxos had released a selection of Rorem's songs with Carol Farley singing and Rorem himself at the piano together with a CD of chamber music. Following this CD of Rorem's symphonies, Naxos has released two additional CDs consisting of Rorem concertos for various instruments.

I only had the opportunity to listen to this CD recently and may have missed something of the initial enthusiasm resulting from the discovery of this neglected music. In the interim, I had the opportunity to hear other works by Rorem and by other American composers on Naxos. This exposure to other contemporary American works may have helped shape my perspective on this music.

The three symphonies on this CD were written relatively early in Rorem's career in 1950, 1956, and 1958. Of the group, the third symphony was premiered by Leonard Bernstein in 1959 and received an early recording by Maurice Abravanel but otherwise, up until this release, was infrequently performed. The first and second symphonies are even more obscure.

I enjoyed these symphonies. Music lovers are in Naxos's debt for this and other recordings of deserving American music. The symphonies are tonal in character and readily accessible. They are melodic, on the whole, and their orchestration is particularly imaginative. The symphonies are kaleidescopic, as within each movement the tempo and tone of the work often shifts rapidly. The word most frequently used for these symphonies is "cinematic." Because of their breadth and accessibility, I felt I was listening to music that properly could accompany a large, dramatic movie.

My favorite of these works was the five-movement symphony no. 3 with the variety of its musical language. The work opens with a flourish in the baroque musical form of the passacaglia, followed by two short movements, a brusque scherzo and a song-like largo. The pastoral fourth movement features an English horn solo and the finale is boisterous with a collage of elements.

The rarely-performed first symphony is in four short movements with, again, a brassy opening movement, a pastoral, second movement showing French influence, a melodic third movement, and another bumptious finale.
The even rarer second symphony opens with a lengthy (15 minute) movement of changing patterns. The much shorter second and third movements are, respectively, lyrical and distinctively American, and quick, lively and bumptious.

I was pleased to have the opportunity to explore these fine symphonies as they include much delightful music and helped me further explore the work of American composers. I am not sure whether these works, with the possible exception of the third symphony, will ever enter the active repertoire of American music. They seem to me somewhat patchy and also derivative of the work of other American composers of tonal music, including Bernstein, Copland, and Schuman. Be that as it may, the symphonies are worth hearing.

As Ned Rorem aptly said in the comments he supplied for the liner notes, the symphonies have been made accessible and "now we must let the music sing for itself."