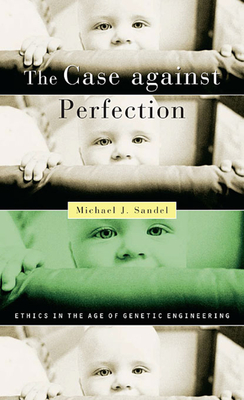 The Case Against Perfection: Ethics in the Age of Genetic Engineering

What is wrong with re-engineering genetics? In this work, Sandel argues that the pursuit of perfection is flawed for reasons that go beyond safety and fairness. He contends that the genetic revolution will change the way philosophers discuss ethics and will force spiritual questions back onto the political agenda. Read More

What is wrong with re-engineering genetics? In this work, Sandel argues that the pursuit of perfection is flawed for reasons that go beyond safety and fairness. He contends that the genetic revolution will change the way philosophers discuss ethics and will force spiritual questions back onto the political agenda. Read Less

All Editions of The Case Against Perfection: Ethics in the Age of Genetic Engineering

The Blank Slate: The Modern Denial of Human Nature

The Idea of Justice

Democracy's Discontent: America in Search of a Public Philosophy

Beyond Humanity?: The Ethics of Biomedical Enhancement

Where to draw the line in the Genomic Revolution

The Case Against Perfection.
Sandel starts out on this morally troubled journey wondering how far we will go with the new tools being developed to perfect ourselves and permanently alter the genetic make-up of humans and animals on our planet.
He looks into bio-engineered and genetic fixes for medical purposes and into the debate of the non-vital use of tailored drugs in sports touching on the performance enhancing drugs so controversial in the Olympics, the professional baseball players pressured into doping up before heading out to the field.
Are these tools of playing God with genetics a good or bad thing, and are we ready to be grown up about it?
This is an important book for the next generation to understand and grasp, earlier is better perhaps, but certainly their modern parents should get a handle on the debate, students of the subject, bio-ethicists and politicians and particularly those in the FDA challenged with the duty of permitting licenses for items such as Elli Lillie's new growth hormone for shorter than average children.
To the mind of many bio-ethicists, such as John Suvalescu, parents have an obligation not just to heal or fix deficient children, but to genetically enhance them as much as possible and make a healthy child healthier. Although this argument has great curb appeal, is it a balanced moral idea or does it lead us down the wrong path, to the ultimate in genetic enhancements; genetically mastered and tailored offspring, perhaps?
This used to be called eugenics; picking the genetic make-up of those allowed to reproduce. In the 1900's it caught on in a big way. Sandel says the old genocidal eugenics of World War II and forced sterilizations for 60,000 Americans in the 1900-1970's, has been crafted into something new today.
Since eugenics has been tied with the 'new consumerism, the accompanying modern 'liberal-eugenicists' hope to accommodate the needy by encouraging the availability of these services based on freedom of choice and fairness of distribution, they intend to avoid the coercive tactics of governments that lead to concentration camps of old.
Liberal eugenicists and bio-ethicists with opposing views to his own, say that as long as the "benefits and burdens of genetic improvement are fairly distributed....eugenic measures are unobjectionable and may even be morally required." This sounds a lot like the words of an earlier fan of eugenics; Adolf Hitler, Sandel says.
Whether or not the consumer can choose freely from an equally available set of choices is another debate, but logic would say it costs more to get better services, so we already start out on an uneven footing based on our income bracket.
Either way, there is something uncomfortable about the whole thing on a moral and universal level and Sandel feels it should be of concern to all of us not just those with a religious approach, because it is a time where we can change the hand nature deals us.
"We used to speak of non-medical drug use as 'recreational.' That term no longer applies. The steroids and stimulants that figure in the enhancement debate are not a source of recreation but a bid for compliance, a way of answering a competitive society's demand to improve our performance and perfect our nature. This demand for performance and perfection animates the impulse to rail against the given. It is the deepest source of the moral trouble with enhancement."
And the 'given,' as he describes it, is natures lottery, but if this randomness of nature is so terrifying or the methods of attaining a child in the traditional manner are inconvenient for some parents, he cites the example of a deaf, gay couple who chose to become pregnant with a deaf son by a man with 5 generations of deafness in his family, as alarming as it may seem, this is what they chose, who are we to stop them from picking the genetic make-up of their offspring? No one would have card had it been a super-model with a high IQ.
Increasingly early pregnancy screening can check the worthiness of the unborn child, but with this new technology comes responsibility which now falls upon the parents to decide; is what nature has 'given' them good enough, or must they render nature impotent and start over, the question changes from the awe and wonder of 'what are we having?' to 'are we having this child or not?'
However morally reprehensible or cold-hearted all this suggested or actual meddling may seem, and in-spite of the inevitable experimentation with stem cell research and cloned animals that is taking us there, we do live in a violent and torn world and this offers us more clouding to our moral path.
It is natural for us to yearn to genetically fix people towards global peace, universal health, but as soon as we do we step into dangerous ground; we challenge our freedom on a fundamental level.
"Our freedom as equal moral beings depends on having an origin beyond human manipulation or control," and although being able to choose genetic enhancements to be more competitive in society is seen by some to be a step towards greater human potential, it is the opposite, he says; "it is the society we live in that should be changed, through better social and political means, not the nature of the people who populate it, changing ourselves to fit our society is effectively a loss of this freedom, it is disempowerment."
Michael Sandel is the Anne T. and Robert M. Bass Professor of Government at Harvard University, where he has taught political philosophy since 1980. He currently serves on the President's Council on Bioethics, a national body appointed by the President to examine the ethical implications of new biomedical technologies.