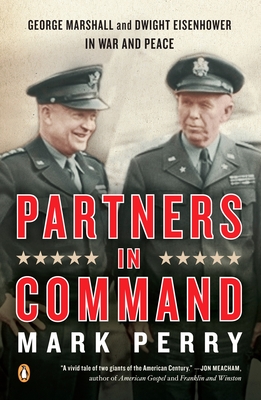 Partners in Command: George Marshall and Dwight Eisenhower in War and Peace

A military analyst delivers a revelatory account of the remarkable, evolving relationship forged between George Marshall and Dwight Eisenhower during World War II and into the Cold War. Read More

A military analyst delivers a revelatory account of the remarkable, evolving relationship forged between George Marshall and Dwight Eisenhower during World War II and into the Cold War. Read Less

All Editions of Partners in Command: George Marshall and Dwight Eisenhower in War and Peace

The Most Dangerous Man in America: The Making of Douglas MacArthur

Grant and Twain: The Story of a Friendship That Changed America

The Pentagon's Wars: The Military's Undeclared War Against America's Presidents

Lift Up Thy Voice: The Grimke Family's Journeyfrom Slaveholders to Civil Rights Leaders

If you have been watching--or reading--Ken Burns account of WWII, you may have had enough for awhile. However, this study of the relationship between the two essential American leaders of the war offers a unique perspective on the human and military climate in which it was fought. Two more disparate personalities could hardly have been found to cooperate in such a desperate enterprise. Marshall, reserved and formal, the "upperclassman" to Eisenhower's jovial if inflammatory personality, emerges as incredibly efficient and self-sacrificing . Common knowledge is how he sacrificed his own desire to lead the Normandy invasion, how he selected and pushed the younger man to the top of their profession. When Fischer's Albion's Seed examined the culture of the Virginia aristocracy, he singled out Washington, Lee, and George Catlett Marshall as examples of the best in its tradition. And all things considered, Eisenhower's gift for dealing with egocentric military primadonnas (as well as Churchill) was as important to victory as his military acumen. You emerge with great respect for these two men, and gratitude for an almost miraculous relationship, without which it quite possibly have been impossible to win the war. Wonderful vignette: Marshall, alone in the civilized world, had never addressed Eisenhower as Ike. Until watching a victory demonstration one day, he broke, threw his arm around the younger man's shoulder, and blurted out, "Look at that, Ike!" Ike couldn't control his shock, and Marshall got so flustered he addressed him as "Eisenhower" five times in the next sentence.