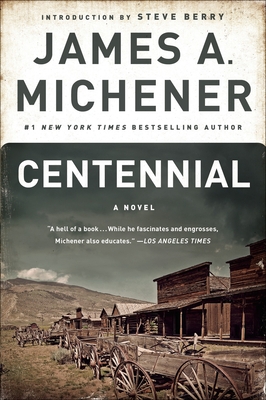 All Editions of Centennial

Books by James A Michener

Tales of the South Pacific

I love this story! Especially once you get past all the talk about the formation of the land and explanation of the earliest inhabitants. It's a good read and I recommend it!

An Historical Novel at its best.

?Centennial?, is the first of the many books written by James Michener, that I have read. It tells of the journey of the pioneers and the settlement of a town. However, in doing so he showed the pain and joy of those people that settled our nation. He even went back in time, giving an imaginary story to some of the historical discoveries and events that happened at various times during the pioneers? travels. There is so much in the book that I will mention only one passage because it not only made an impression on me as far as history, but also it was written with such beauty that it could have been a poem. ?How beautiful she was as she took that painful journey, how gracefully coordinated her movements as she swam toward the chalk cliff. She moved as if she owned the earth and conferred grace upon it. She was the great final sum of millions of years of development. Slowly, swaying from side to side with majestic delicacy, she made her way to the swamp that lay at the foot of the cliff.?(Page 83 Centennial ? by James Michener) I have read this passage, of which there is more, to some friends and asked them what was being described and they have said a beautiful woman. The truth is it is a Diplodocus dinosaur; there is more to the description of this animal as she faces her last moments. I would recommend this book to everyone. It does not give just the surface story, as if the author were just writing a cheap love story The author has done a great deal of research and has woven an immense amount of historical background into this book.