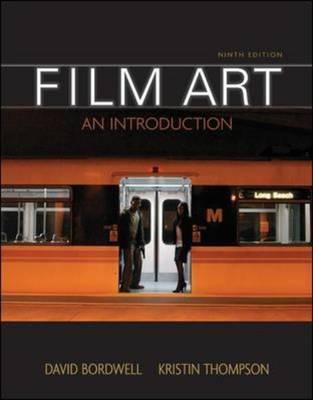 Film is an art form with a language and an aesthetic all its own. Since 1979, David Bordwell and Kristin Thompson's Film Art has been the best-selling and widely respected introduction to the analysis of cinema. Taking a skills-centered approach supported by a wide range of examples from various periods and countries, the authors strive to help students develop a core set of analytical skills that will deepen their understanding of any film, in any genre. Frame enlargements throughout the text enable students to view ... Read More

Film is an art form with a language and an aesthetic all its own. Since 1979, David Bordwell and Kristin Thompson's Film Art has been the best-selling and widely respected introduction to the analysis of cinema. Taking a skills-centered approach supported by a wide range of examples from various periods and countries, the authors strive to help students develop a core set of analytical skills that will deepen their understanding of any film, in any genre. Frame enlargements throughout the text enable students to view images taken directly from completed films, while an optional, text-specific tutorial CD-ROM helps clarify and reinforce specific concepts addressed in the text with the use of film clips. Building on these strengths, the ninth edition adds coverage of new technologies, updated examples, and references to the authors' acclaimed weblog to provide unparalleled currency and connect students with the world of cinema today. Read Less

All Editions of Film Art: An Introduction with Tutorial CD-ROM

The Classical Hollywood Cinema: Film Style and Mode of Production to 1960

Film Directing Shot by Shot: Visualizing from Concept to Screen

In the Blink of an Eye: A Perspective on Film Editing

Too Cool for School

Anyone with an interest in film or who likes to watch movies with an understanding of the processes that involve filmmaking, will get something from this excellent edition of a text book that has become the staple of film studies in a formal educational setting. Film Art: An Introduction (Eighth Edition) by David Bordwell and Kristin Thompson is an excellent updating of a great film resource text.

I was first introduced to first edition of the text way back in the late 1970s when it was smaller and contained fewer color pictures. The new Eighth Edition has color plates throughout, updated filmography and a CD-ROM disc addition, what the book blurb touts as ?text-specific Tutorial CD-ROM with video clips?, that greatly enhances the depth and applicability of the subject for the cineaste, the casual reader, and the student.

About letter-size 11 inches by 8 and a half, but with the glossy pages containing a very generous selection of film stills, weighing in at 4 pounds (this is more than some of the new laptops), it is substantial but the size makes holding papers in between the pages quite convenient.

Comprehensive in scope, and structured to cover the industry as well as aesthetic concerns of film and newer media developments in video, Film Art is set up in six parts with a total of 12 chapters.

Part One, Film Art and Filmmaking, Chapter 1 ?Film as Art: Creativity, Technology, and Business?, is a good introduction in which the authors talk about the basic activity surrounding film. An overview of the major film companies and distributors as well as some perspective on the collaborative creativity involved from many diverse areas such as financing, marketing, and art direction, planning, and others, complete this section.

What holds the viewer interested in Comparative Literature or a Post-Modernist evaluation of Film is primarily attended to in Part Two, Film Form, in which the authors discuss the principles a filmmaker uses to construct a film.

Chapter 2 ?The Significance of Film Form?, covers form of a film and the significance of how it compares against the content in a film, and ultimately what those elements mean. There is a breakdown of the structural properties of The Wizard of Oz, as an example, and how the elements used in the movie are designed to create meaning.

Chapter 3 ?Narrative as a Formal System?, covers what narrative is, ultimately defining the concept as a cause-and-effect chain of events occurring over a period of time. The authors talk about the films like Citizen Kane and others that manipulate time duration, and causality to create meaning.

My favorite section is Part Three Film Style, because it covers a number of aesthetic elements and gives good examples that exist in current films and examples as well from historical artifacts.

In Chapter 4 ?The Shot: Mise-en-scene?, the Bordwell and Thompson talk about the elusive French term and what it encompasses, covering two of my favorite films His Girl Friday, and 81/2. The section also discusses camera set ups and how the actor, and virtually everything that the camera sees is part of the mise en scene.

Chapter 5 ?Cinematography? covers details of focal length, lens selection, and lab work like ?pushing? film in development to get more contrast, and is well explicated for the photographer who used film stock and development procedures to hone his craft.

My interest is in putting together a complete visual picture and in Chapters 6 and 7 Bordwell and Thompson cover these elements clearly. In Chapter 6 ?The Relation of Shot to Shot: Editing?, covering LA Confidential, The Birds, The Maltese Falcon and others, the authors talk about how editing shots together can create a pace and effect the viewer. This section has the most primal value to the film viewer who ultimately looks to the movie itself when analyzing film. I believe that the visual medium of filmmaking holds the meaning that so much theory attempts to uncover- Bordwell and Thompson seem to be at their strongest when evaluating purely visual value of movies aside from the theory.

One of the most overlooked elements in student films is discussed in Chapter 7 ?Sound and the Cinema?, in which the authors talk about sound bridges, how sound can add focus to scene and in particular how sound in Jackie Brown adds meaning to the film.

Another of my favorite sections is Chapter 8 ?Style as a Formal System? which covers how many combined elements such as mise-en-scene, cinematography, editing and sound are combined by a filmmaker to develop a style. The authors talk about how style is plastic to the filmmaker and what it means to the viewer. Again the elusive elements are well highlighted by the authors as they draw on visual examples to make their points.

Part Four, Types of Films, covering Film Genres and Documentary, Experimental, and Animated Films, explicating what Genre is, and how to analyze a genre is a good section for the archivist or one who is interested in classifications. The section covers the Western, Horror, Musical and talks about the ultimate social function of genre.

Part Five Critical Analysis of Films, Chapter 11, ?Film Criticism: Sample Analyses?, with an Appendix on page 431 which covers how to organize your thinking in terms of writing about Film, with fine sample writing. I have turned to this section time and again to get a good understanding of how to think through a movie in terms of lighting, acting, art direction, camera movement, cinematography, direction and other possible discussion points such as political themes, feminist point of view, or even marketing concepts. Bordwell and Thompson excel in putting forth fine ideas, and generously, for the reader.

Every chapter concludes with ?Where to go From Here? a selection of current places to expand one?s understanding and education of film and movie-making industry. Page 472 at the end of the book continues this pattern with additional available texts from General through to French and Italian and up to the New Hollywood and Independent Filmmaking, and Contemporary Hong Kong Cinema.

The CD-ROM included covers many films with sample quizzes that allow the viewer to really just dust off his understanding of certain films and get in synch with the lexicon that the authors utilize to communicate film art. This is a great buy for anyone who love movies.