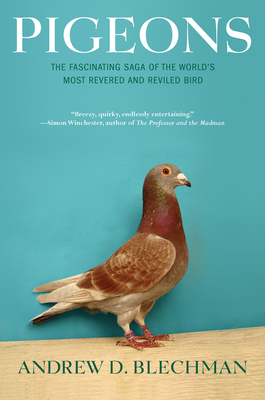 Pigeons: The Fascinating Saga of the World's Most Revered and Reviled Bird

Pigeons have been worshipped as fertility goddesses and revered as symbols of peace. Domesticated since the dawn of man, they've been used as crucial communicators in war by every major historical superpower from ancient Egypt to the United States and are credited with saving thousands of lives. Charles Darwin relied heavily on pigeons to help formulate and support his theory of evolution. Yet today they are reviled as "rats with wings." Author Andrew D. Blechman traveled across the United States and Europe to meet with ... Read More

Pigeons have been worshipped as fertility goddesses and revered as symbols of peace. Domesticated since the dawn of man, they've been used as crucial communicators in war by every major historical superpower from ancient Egypt to the United States and are credited with saving thousands of lives. Charles Darwin relied heavily on pigeons to help formulate and support his theory of evolution. Yet today they are reviled as "rats with wings." Author Andrew D. Blechman traveled across the United States and Europe to meet with pigeon fanciers and pigeon haters in a quest to find out how we came to misunderstand one of mankind's most helpful and steadfast companions. Pigeons captures a Brooklyn man's quest to win the Main Event (the pigeon world's equivalent of the Kentucky Derby), as well as a convention dedicated to breeding the perfect bird. Blechman participates in a live pigeon shoot where entrants pay $150; he tracks down Mike Tyson, the nation's most famous pigeon lover; he spends time with Queen Elizabeth's Royal Pigeon Handler; and he sheds light on a radical "pro-pigeon underground' in New York City. In "Pigeons," Blechman tells for the first time the remarkable story behind this seemingly unremarkable bird. Read Less

All Editions of Pigeons: The Fascinating Saga of the World's Most Revered and Reviled Bird

Leisureville: Adventures in a World Without Children

The Silent Sky: The Incredible Extinction of the Passenger Pigeon

How to Raise and Train Pigeons

Superdove: How the Pigeon Took Manhattan ... and the World

Every now and again someone comes along and makes me change my mind. They assault my prejudices with facts, challenge my beliefs with evidence, and even cause me to reinterpret certain life experiences.

I could defend the old ways of course, but why bother? The other guy is right and I have been wrong. Time to change.

I refer, of course, to pigeons. "Rats with wings", as I have gleefully taught my children to call them. I kick them when I can, dodge them when I can't, and curse them at all times. Never actually shot or poisoned one, mainly because I did not want a rotting bird to dispose of. Glad to mount fake plastic owls, install sharp wires or spread smelly goop to try to keep them away (didn't work) or to shoot their eggs with a pellet pistol pumped to low velocity (worked fine). Anything to curtail their incessant hooting and restrict the worrisome accumulation of guano outside my bedroom window when I lived in San Francisco.

Now along comes Andrew Blechman to gently explain that I am a victim of false consciousness imposed by pest control companies. He has published Pigeons: The Fascinating Saga of the World's Most Revered and Reviled Bird. He gets carried away with the whole thing, as authors of books like this tend to, but he does make a persuasive case for rethinking pigeon hatred ("anti-philoperisteronism" as Simon Winchester would put it. Winchester is a splendid writer, liked the book, and apparently feels that since he wrote two tomes on the OED he is now entitled to make up any word he likes. Works for me.)

Pigeons, as it turns out, are doves. They may be airborne vermin, but they are also creatures of noble heritage, astonishing athleticism, proven bravery in combat, and if not man's best friend, definitely one of our oldest. Consider:

* The pigeon is the world's oldest domesticated bird. Mesopotamian cuneiform tablets mention the domestication of pigeons more than 5,000 years ago, as do Egyptian hieroglyphics. We domesticated pigeons at the dawn of our civilization about ten thousand years ago (roughly when we tamed dogs as well). We have worshiped pigeons as fertility goddesses and used them as symbols of peace. According to the Bible, God sent Noah a pigeon.

* Pigeons have fought in every major war from ancient Egypt to America. The Greeks, Romans and even the Mongol hordes used them to deliver critical messages. Hannibal used pigeons in his siege of Rome.

* Pigeons are credited with saving thousands of lives in combat. A million served in WWI and WWII. The greatest pigeon warrior of them all, Cher Ami, suffered multiple gunshot wounds but pressed on and delivered the message that saved the surviving members of the Lost Battalion during World War I, a feat that won him the Croix de Guerre. That's right: George S. Patton, Sargent York, Jimmy Stewart, and Cher Ami all decorated for heroism in combat.

* For most of human civilization, our most vital information traveled by pigeon. A pigeon delivered the results of the first Olympics in 776 B.C. and a pigeon first brought to London the news of Napoleon's defeat at Waterloo more than 2,500 years later. Julius Reuters parlayed a fleet of over 45 pigeons to deliver news and stock prices between Brussels and Aachen and create the world's largest news gathering organization. Pigeons deliver mail to this day in parts of rural India.

* Pigeons are astonishing athletes. A horse may race around a mile track at 35 mph, but a pound of pigeon flesh and feathers can routinely fly more than 500 miles in a single day. Flights as long as 1689 miles have been recorded by exceptional birds. Their average flying speed is around 30 miles per hour, but they can achieve bursts of speed up to 150 mph. (Wikipedia reports here that pigeons in a dive can break the sound barrier and produce "pigeon bang" -- evidence less of bird speed and more of just how risky an open source encyclopedia can be).

* Pigeons are famously adaptable and now live in every major city of the world and on every continent except Antarctica. They don't migrate, they adapt. Charles Darwin fancied pigeons and relied heavily upon them to help formulate his theory of evolution. Indeed Origin of the Species opens with a series of observations about pigeons so compelling that the publisher pressured Darwin to omit all the stuff about evolution and just publish a bird book.

* Pigeons are amazing navigators. It is not clear how pigeons find their way home over terrain they have never seen, but they have reliably done so for centuries. Scientists are investigating the possibility that pigeons navigate using Earth's magnetic field, odors, the perceived time of day, subsonic sound waves, or natural and artificial landmarks much the same way that humans do.

* Picasso admired pigeons. He painted them frequently and named his daughter Paloma (Spanish for pigeon). More remarkably perhaps, some pigeons learned to admire Picasso: Researchers Watanabe, Sakamoto and Wakita famously trained pigeons to discriminate between the paintings of Picasso and Monet (they later published a paper, somewhat tongue in cheek, showing that the birds often out-performed college students at doing this!).

* Pigeons mate for life, guard their young, and may be the only bird that can pass the mirror test. Seven animals can recognize its reflection as an image of itself: chimps, bonobos, orangutans, dolphins, elephants, and humans are the others -- although many scientists question whether pigeons can actually pass the test. Parent pigeons nurse their young until they are full grown -- which is why you've never seen a baby pigeon.

* Pigeons are useful. The babies are delicacies ("squab"), the slow one are game ("dove hunting"), and the fast ones are racers. Winning racing pigeons bring home millions of dollars in prize money and fetch tens of thousands of dollars at auction. (The sport is so popular that winning birds are now routinely tested for amphetamine use).

Pigeon foes have a single compelling argument however:

* Pigeons p oop. "Rock doves" don't, as it turns out, carry much in the way of diseases but each bird dumps about 25 pounds annually. In cities, that's plenty. Blechman is kind enough to point out that that for centuries, pigeon droppings were considered a semi-precious commodity controlled by Kings because they were used to manufacture saltpeter, a prized element of gunpowder. Who cares? Now it's just pigeon p oop and a little goes a long ways. Indeed, Blechman's interest in these birds began not with some romantic affection for turtledoves but rather from being hit in the face with high velocity pigeon c rap during a job interview!

So naturally, we poison the little pests. Or we poach them from cities and sell them by the thousands to rural gun clubs for use as live target practice. This upsets Mr. Blechman, who points out that controlling pigeon populations is fairly easy. Blechman claims that many European cities have reduced their pigeon populations 50% or more by confining all pigeon feeding to city-sponsored dovecotes (bird houses). The pigeons are happy to move in and get fed and city workers can easily destroy the eggs (in other words, a variation on the tactic that worked for me in San Francisco).