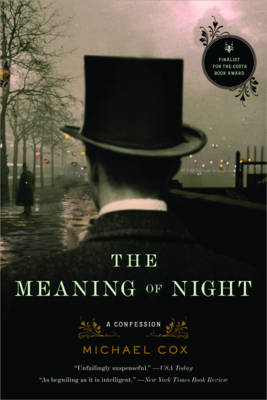 The Meaning of Night: A Confession

The atmosphere of "Bleak House," the sensuous thrill of "Perfume," and the mystery of "Jonathan Strange & Mr. Norrell" all combine in a story of murder, deceit, love, and revenge in Victorian England. Cox gives readers an enthralling novel that will captivate right up to its final thrilling revelation. Read More

The atmosphere of "Bleak House," the sensuous thrill of "Perfume," and the mystery of "Jonathan Strange & Mr. Norrell" all combine in a story of murder, deceit, love, and revenge in Victorian England. Cox gives readers an enthralling novel that will captivate right up to its final thrilling revelation. Read Less

All Editions of The Meaning of Night: A Confession

The Glass of Time

The Glass of Time: The Secret Life of Miss Esperanza Gorst

The House at Riverton

The Glass of Time

If you like Victorian London mysteries and history and intriguing plots, this is the book for you. It thickens with every chapter and keeps you wanting to read it in one gulp.......but don't, savor and enjoy this like a mini series. I read there is a sequel and I have not yet looked into that but I guarantee it will be my next purchase. Michael Cox knows how to weave excitement in a slow deliberate way. Many footnotes regarding all manner of historical facts, places, languages and so on. This is a literary mystery and not a monthly punched out pulp fiction.

Erudite faultless writing. Long slog loving nod to the 19th c genre
perfected by Mary Braddon. Dive in if you are a distance swimmer.
Not for the literary feeble, you need to know your classic references
to appreciate it.

"After killing the red-haired man I took myself off to Quinn's for an oyster supper."
From the first sentence, The Meaning of Night grabs you and doesn't let go. Reminiscent of Wilkie Collins and the Brontes, Michael Cox's novel paints a detailed portrait of Victorian England. The tone is classic Victorian potboiler, with an intricate plot hinging on a dispossessed heir, a long-buried secret, and obsessive retribution. Think The Count of Monte Cristo, Bleak House, and Doctor Jekyll and Mr. Hyde. But this is contemporary in that there is no moral center to the book. Edward Glyver is an unlikely hero: not only a cold-blooded killer, he is also an unreliable narrator. The reader is kept unsure -- is Edward deluding himself in his obsession with Phoebus Daunt? All the characters here know more than they're saying. Edward is advised to "trust no one", and the reader should keep this in mind as well. The problem is that none of the characters is truly likeable. The book is also somewhat slow-moving, with every plot twist set up well in advance. It is interesting enough - and the reader is kept off balance enough - that the pages keep turning, but it does make the book slightly unsatisfying. A well-researched, convincing, and richly imaginative novel, I recommend it with slight reservations.