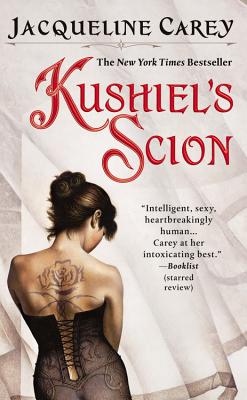 All Editions of Kushiel's Scion

Mistress of the Empire

Daughter of the Empire

Solid 3 and a half

It cannot have been easy to give up Phèdre nó Delaunay as a protagonist in exchange for a new narrator in the "Kushiel's Legacy" series, but Carey handles the change-up with aplomb. Imriel de la Courcel is an empathetic character, and his point of view is written with skill and care. The difficulty lies, I think, in giving him a plot that is anywhere as interesting or important as those that Phèdre lived through. How on earth can Carey top herself in this respect?
Well, she doesn't. I think she wisely did not attempt such a feat, considering the newness and youth of the new narrator. Instead, she focuses on Imriel's internal struggles as he comes to terms with his status as son of two of his country's worst traitors, and foster son of one of its greatest heroines.
The tactic mostly works, but I couldn't help comparisons to the grandiose events and themes of Phèdre's books, especially during Imriel's long sojourn to University that felt mostly like a distraction from more interesting events back in Terre d'Ange. All in all, this book is inferior to the first three of the series, but by no means unreadable. It is simply a new direction, and it takes a major mental adjustment to become accustomed to it when coming straight off of Phèdre's story.