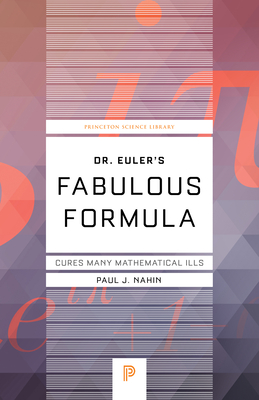 Accessible to any reader with the equivalent of the first two years of college mathematics, this is the story behind one of the world's most influential mathematical equations. 2 halftones. 77 line illustrations. Read More

Accessible to any reader with the equivalent of the first two years of college mathematics, this is the story behind one of the world's most influential mathematical equations. 2 halftones. 77 line illustrations. Read Less

Hot Molecules, Cold Electrons: From the Mathematics of Heat to the Development of the Trans-Atlantic Telegraph Cable

In Praise of Simple Physics: The Science and Mathematics Behind Everyday Questions

The Logician and the Engineer: How George Boole and Claude Shannon Created the Information Age

The Equation That Couldn't Be Solved: How Mathematical Genius Discovered the Language of Symmetry

Unknown Quantity: A Real and Imaginary History of Algebra

Journey Through Genius: The Great Theorems of Mathematics

Paul Nahin may be not quite economical with his equations, nor pay much attention to detail in his diagrams, but what is remarkable about his writing is that he offers no apologies for the math he presents.

The book goes to show that with equations, it is possible to challenge the nontechnical reader and be rewarded for it, contrary to reducing the readership by half, as Stephen Hawking once pointed out. As I read through his 2.718th book, I find it has a place between a history of math text and a college freshman treatise - a niche, which has been explored, surely, with much angst by both liberal art schools and math departments alike. Nahin's book does a very good job however, in sitting comfortably in that niche.

On the technical side, his treatment of Fourier analysis would rival most informal approaches, and on the historical flavour, he has a nose for the unusual, turning over established myths with ease. Doing the legwork and research to peel away that which we take for granted doesn't necessarily follow the path of least resistance. While math is resplendent with factoids of misplaced or undue credit, it is important to realise the importance of original sources without treating it as geek trivia. A case in point being the the debate over the Gibbs phenomenon, the term itself belying the irony . The overall treatment could have been somewhat more complete, however, since we are left with little else beside the functional behaviour quantifying the overshoot at a discontinuity in a Fourier representation.

However, such limitations are atoned for by other brownie points. Did I mention the proof of the isoperimetric inequality in section 4.6? It is one of the hidden beauties, extremely simple and elegant, using Parseval's relation, of all things! It definitely stands out as one of those moments when you forget to breathe.

That said, the brevity of Nahin's proofs, and especially some of the algebra, could be best described as symbol sprawl. Though there has been a strong attempt at clarity, lest he be accused of skipping trivial steps and sweeping them beneath invisible print, at times there has been needless redundancy, as you'll observe in example 2 in section 5.3 (page 210). The other aspect of the treatment which I found questionable in general was the diagrams. While Nahin is an electrical engineer and justifiably adores Matlab, it isn't the most optimal for data representation, and the graphic editors could have done a better job.

With that singular gripe, I am glad to have gone through Nahin's book with much pleasure. While he mentions in another book that he expects his reader to have callused fingers from working through the math, I wouldn't quite stretch it that far. But I credit Nahin with sharing his enthusiasm with his readers, at times with almost fantastical forays, and at other times apologising for his sentimentality, or his bad limericks.