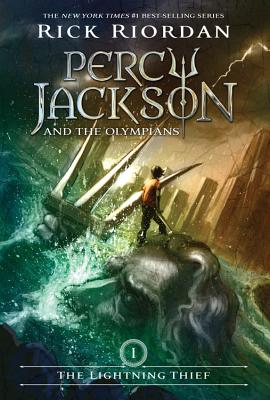 Now in paperback--the first novel of a new series that mixes classic Greek mythology with modern adventure. After learning he is a demigod, Percy Jackson is sent to a summer camp on Long Island, where he meets the father he never knew--Poseidon, god of the sea. Read More

Now in paperback--the first novel of a new series that mixes classic Greek mythology with modern adventure. After learning he is a demigod, Percy Jackson is sent to a summer camp on Long Island, where he meets the father he never knew--Poseidon, god of the sea. Read Less

All Editions of The Lightning Thief

The Tower of Nero

The Mark of Athena

An excellent start to an excellent series. After reading this series myself, it compelled me to read on about all kinds of mythological stuff such as the gods and their origins, the monsters, and so on.

A book worth picking up!

This novel, written by Rick Riordan, is the first in the "Percy Jackson and the Olympians" Series. I happen to find this my fourth favorite book in the series (5 Books total), maninly because I enjoyed the other books way more.

Percy, a half mortal, half god (Also referred to as Half-Blood or Demigod), is though of as being the answer to a prophecy that the God's feared may come true. Percy and his two newest friends Grover and Annabeth, must go on a quest in order to prevent an all out war between the gods of Olympus. This book, along with the series itself, educates the reader about Greek Mythology and its importance to life, whether one can relate to it or not.

?What if it lines up like it did in the Trojan War ... Athena versus Poseidon?"
"I don't know. But I just know that I'll be fighting next to you."
"Why?"
"Because you're my friend, Seaweed Brain. Any more stupid questions??

A fun adventure, (the movie inspired J.M. Snyder?s ?To Love A God?), that is a new and good change from magic and fantasy. I love Greek mythology. I find it very interesting how the wild existence of the gods and goddesses are used to explain the unknown. It?s my experience that the amount of mythology books out there is slim to find, unless you enjoy reading the classics over and over. Rick Riordan?s adventure is exciting and easy to follow for anyone. Percy is a good yet troubled kid who must find his own place in the world, as he learns what it means to be both a half-blood and a hero. Because I already have the first three books in the series, I look forward to reading them, but I don?t see myself reading any more of Rick Riordan?s books. I highly recommend them for young readers, but not for adults. It?s not grown up enough with violence, language, and sex.

Bought this for my 14 year old son. He has read through it once and is well underway on a second read.

The movie was good. The book was much better. I advice to read this book first then see movie.