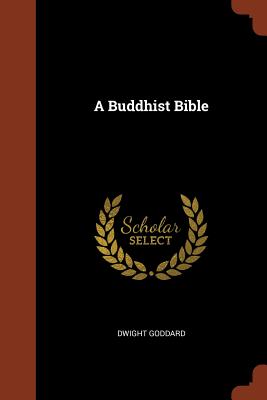 The Lankavatara Sutra is one of the most important sutras of Mahayana Buddhism, and it is influential in coming to terms with the doctrines of Mahayan Buddhism, and in bringing the general adoption of Buddhism to the Orient. Read More

The Lankavatara Sutra is one of the most important sutras of Mahayana Buddhism, and it is influential in coming to terms with the doctrines of Mahayan Buddhism, and in bringing the general adoption of Buddhism to the Orient. Read Less

All Editions of A Buddhist Bible

A Buddhist Bible: The Favorite Scriptures of the Zen Sect

Eminent Engineers: Brief Biographies of Thirty-Two of the Inventors and Engineers Who Did Most to Further Mechanical Progress

Eminent Engineers: Brief Biographies of Thirty-Two of the Inventors and Engineers Who Did Most to Further Mechanical Progress (1906)

An Introduction to Zen Buddhism

Wake Up: A Life of the Buddha

Dwight Goddard's collection of Buddhist Sutras and related texts, first published in 1932, is available in paperback with introductions by Robert Aitken and Houston Smith. The importance of this book lies in its role in the development of American Buddhism as well as, of course, in the texts themselves.

Dwight Goddard, according to Aitken's introduction, was an enigmatic figure with training first as an engineer (where he became wealthy as a result of an invention) and as a Christian minister. In the latter role, he travelled to the East and became interested in Eastern Religions -- a seeker in the true sense of the term. In the 1930s, while in his 60s he produced this collection of texts, many of which he translated himself, which give a broad view of the nature of the teachings of Buddhist schools. The book helped teach Buddhism to Americans beginning in the 1930s.

In the 1950s, Jack Kerouac, then living in San Jose, California discovered Goddard in the public library. He carried the book with him wherever he went and used it as the basis of whatever knowledge of Buddhism he had. The beats in the 1950s were one of the sources leading to the growth of American Buddhism, and Goddard's book was Kerouac's teacher.

The main value of this book, though, is not in its role in Buddhist history in the United States but lies in the texts themselves. Goddard presents in one volume a selection of primary source materials from the Theravada, Manayana, Zen, Tibetan, and other Buddhist traditions. Many of these texts have been more recently translated, but the translations in this book are readable, at the least and they are all in one volume. They are not easy reading and will require many rereadings, but they do present a compiliation of basic Buddhist materials for those wishing to benefit from them. My own familiarity with Buddhist texts is primarily with the earlier texts in Theravada Buddhism. This book is comparatively light on Theravada texts but gave me the opportunity to read the texts of other Buddhist Schools.

"A Buddhist Bible" remains a fine anthology and is of historical interest for the transmission of the Buddha's teaching to the United States. I have found that many people interested in Buddhism restrict themselves to the practice of meditation or to books setting out Buddhist teachings rather than availing themselves of the original source materials. This book is a great way to read the original texts. There will be something of meaning in them for you.