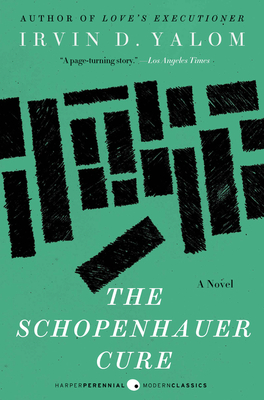 A cast of memorably wounded characters struggles to heal pain and change lives in this novel of group therapy by a master therapist and acclaimed writer. Read More

A cast of memorably wounded characters struggles to heal pain and change lives in this novel of group therapy by a master therapist and acclaimed writer. Read Less

All Editions of The Schopenhauer Cure

The Gift of Therapy: An Open Letter to a New Generation of Therapists and Their Patients

Creatures of a Day: And Other Tales of Psychotherapy

Momma and the Meaning of Life: Tales of Psycho-Therapy

The Gift of Therapy: An Open Letter to a New Generation of Therapists and Their Patients

Love's Executioner and Other Tales of Psychotherapy

Lying on the Couch

Irvin Yalom has had a multi-faceted career as a practicing psychotherapist, as a leading writer of texts on group therapy, and as a novelist. Yalom also had a deeply-based interest in philosophy. His novel "The Schopenhauer Cure" attempts to integrate fundamental human concerns, the search for love, for meaning in life, and for a way to accept death, with a novelistic portrayal of group therapy. It does so through a portrayal of Schopenhauer, among other philosophers. The book does not entirely succeed -- it is somewhat awkwardly written and the characterizations leave a good deal to be desired -- but it is thought-provoking and absorbing.

The story is set in San Francisco. The main character of the book is a famous psychiatrist, Julius, who learns that he has a fatal cancer. He considers how to spend his remaining time of health and, out of the blue, contacts Philip, a patient he had treated many years earlier, apparently unsuccessfully, for compulsive sexual behavior. Philip has in the intervening years given up his former career as a chemist, earned a PhD in philosophy and seeks to become a counselor. Philip has cured his sexual addiction by a study of the Nineteenth Century philosopher of pessimism, Arthur Schopenhauer. Like his mentor, Schopenhauer, Philip is arrogant, aloof, and brilliant. He agrees to become a participant in a therapy group lead by Julius in exchange for Julius's help in meeting the requirements for a counseling license.

We meet a variety of characters in Julius's group: the blue collar worker Tony, (the most appealing character in the book, in my view) the beautiful Rebecca, a lawyer concerned with the fading of her appearance, the reserved pediatrician Stuart, the librarian Bonnie, unhappy with her plainness, the English professor Pam, who has had numerous relationships in and outside marriage, all of them unsatisfactory, and the unhappily married and alcoholic Gill. The group is intrigued by Philip as the newcomer, by his detachment and his anti-sociability. But the members of the group are fascinated by Philip's insights and by his discussions of Schopenhauer's philosophy as a means of approaching the difficulties which plague them and which drive them to therapy. Sexual and relationship issues play a dominant role for each of the participants in the group and for Julius himself.

Gradually, Philip comes to open up and to find a peace with himself, Julius learns to come to terms with his impending death, and the members of the group make varied degrees of progress with themselves.

The chapters dealing with Julius and the group alternate with chapters discussing Schopenhauer's philosophy and life. Schopenhauer was an unattractive individual indeed but he has much to teach. The values of a life of the mind, together with its limitations are brought out well in the novel and compensate for some of the wordy therapy scenes and the insufficient development of some of the characters.

In addition to Schopenhauer, the book considers the works of other philosophers at key points and compares and contrasts them to Schopenhauer. Yalom shows a good ability to get at the heart of the teachings of these philosophers for purposes of his story. They include, particularly, Nietzsche, the stoic philosopher, Epictetus, and Aristotle. Thomas Mann's Schopenhauer-influenced novel "Buddenbrooks" also plays a substantial role in the discussion. As might be expected in a book dealing with Schopenhauer, there is a great deal of discussion of Buddhism and the growth of interest in the United States in the Buddha. In fact Pam, one of the major characters, spends ten days in India at a retreat given by the famous teacher Goenka, and subsequently joins a Buddhist church.

I found the religious and philosophical themes of this book helpful in a book meditating on death and on human sexuality. Julius, born Jewish, is an atheist and a skeptic. The other participants in the groups are, likewise, either secular in their religious orientation or tinged with an attraction to Buddhism. This combination of American secularism and Buddhism I have found appealing in recent years, and I felt validated, in a sense, by seeing this particular way of viewing oneself in the book. But I found myself curious, at several points, about what practicing Jews or Christians would say about this book and how they might respond to the dismissive attitude of the author and the protagonists of the story towards their theism.

This book works better as a study of philosophy and of the value of reflection than it does as a novel or as a portrayal of character. But I found it worthwhile.

Being confronted with cancer and his own death the psychotherapist Julius Hertzferd, try to re-examine his life and work. For reasons that he cannot clearly understands he seeks out Philip Slate, a sex-addict and old patient, which he failed to help. Philip, now a doctor of philosophy, claims to have been cured with the help of the philosopher Arthur Schopenhauer. He says that he wants to be a philosophical therapist, and asks Julius to tutor him. Philip?s misanthropic stance poses a challenge to Julius and he invites him to join his therapy group for six months in exchange for his tutoring in counselling.
The group?s therapy sessions illustrate the interpersonal dynamics and the problems in human relations. Sexuality, betrayal, fear of aging, forgiveness, self-delusion and morality, powerful emotions and feelings, separate and connect the members of the group, shape their characters and their relations.
Through Philip, philosophy and especially Schopenhauer?s ideas are developing throughout the book. His life and philosophy are intertwined in a brilliant way with the group?s interpersonal relations, the unrevealing of their secrets and deepest emotions.
Irvin Yalom very cleverly, allows his characters to be developed in a gradual way; the process of exposure is slow, sometimes very painful and heavily emotional. Reading the book, I caught myself being attached to some of the characters, especially to untouchable Philip. His persistence to preciseness and speech intelligibility, his cleverness and self-possession in contrast to his lack of empathy and interpersonal skills - I wouldn?t say misanthropism ? form an enticing and seemingly strong personality. Only, when his secret is revealed, the flaws in his philosophical armour exposed him to his real self, a man full of rage, shocking lonely, a man that no one has ever loved him.
In a truthful and powerful manner, Yalom, who has had a long involvement with therapy groups, show that emotional accessibility is the key to build bonds and organise attachment behaviour with others. It is a great reading