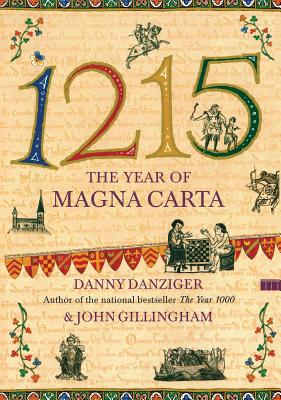 On 15 June 1215, rebel barons forced King John to meet them at Runnymede. They did not trust the King, so he was not allowed to leave until his seal was attached to the charter in front of him. This was Magna Carta. It was a revolutionary document. Never before had royal authority been so fundamentally challenged. Nearly 800 years later, two of the charter's sixty-three clauses are still a ringing expression of freedom for mankind: 'To no one will we sell, to no one will we deny or delay right or justice'. And: 'No free ... Read More

On 15 June 1215, rebel barons forced King John to meet them at Runnymede. They did not trust the King, so he was not allowed to leave until his seal was attached to the charter in front of him. This was Magna Carta. It was a revolutionary document. Never before had royal authority been so fundamentally challenged. Nearly 800 years later, two of the charter's sixty-three clauses are still a ringing expression of freedom for mankind: 'To no one will we sell, to no one will we deny or delay right or justice'. And: 'No free man shall be taken or imprisoned or in any way ruined, except by the lawful judgement of his peers or by the law of the land'. 1215 - THE YEAR OF THE MAGNA CARTA explores what it was like to be alive in that momentous year. Political power struggles are interwoven with other issues - fashion, food, education, medicine, religion, sex. Whether describing matters of state or domestic life, this is a treasure house of a book, rich in detail and full of enthralling insights into the medieval world. Read Less

All Editions of 1215: The Year of Magna Carta

Museum: Behind the Scenes at the Metropolitan Museum of Art

The Year 1000: What Life Was Like at the Turn of the First Millennium

We are Soldiers: Our Heroes. Their Stories. Real Life on the Frontline.

The Year 1000: What Life Was Like at the Turn of the First Millennium: An Englishman's World

The Year 1000: What Life Was Like at the Turn of the First Millennium

A World Lit Only by Fire: The Medieval Mind and the Renaissance: Portrait of an Age

Without doubt, this is a great read for those with little knowledge of the Magna Carta and its significance to the way of life of the British Isles as it then was. However, the story is about the year 1215 itself as well, and the reader relives a fascinating date with history. You feel you are there, just as long as starvation and disease can be ignored, that is! Danziger and Gillingham have covered all the historic points in their rather journalistic approach to King John and why we ended up with Magna Carta in the first place. I liked the text of Magna Carta on page 285 and it reminded me why I liked the book itself: it was Mr Blair?s constitutional reforms which triggered the interest, Barons versus the King in 1215, Press Barons versus the Blair and Brown.

Let us hope that by 2015, the Bar Council will be sufficiently shamed into putting up a proper memorial at Runnymede rather than leaving it to the American Bar Association, as the only organisation, to honour such an important achievement in British History.

As a visiting lecturer covering the UK constitution for the International Center for Legal Studies, I was entranced by Blair?s total disregard for a system which we have cherished for so long with such a bungled as long ago as the summer of 2003 reshuffle. Ok, so we have the Human Rights Act, care of Cherie, but the basics go back to the dawn of writing. It was the elite who had to step in to prevent further constitutional (ie criminal) excesses by one of the most appalling men who ever walked this earth judging by the standard even of his day: King John in 1215. Barons created change then, and they may have to do it again with the jury system if the constitutional juggernaut of New Labour is to be slowed. Change and modernisation are needed but the price can be very high as this book shows.

THE POWER OF THE CHARTER:

Whatever language we use, the basic rights of society, by the grace of God (the charter says) forced King John, clearly a murderous animal, to conform to some concept of humanity as it was then conceived in 1215. William the Conqueror?s Norman placements as Barons had had enough as their blood-line with the Saxons merged the nationalities by the twelfth century. It would be surprising to have an entire book devoted just to 1215 so we have an interesting picture painted of what is erroneously called the ?middle ages?. What are we in now then, our old age? No, we are in modernising Britain again where the ancient post of Lord Chancellor (from before the ninth century, allegedly) is being abolished. No more silly clothes, just silly ideas from the Dome upwards.

THE MAGNA CARTA AND BLAIR'S GOVERNMENT:

It was Magna Carta which first curtailed the power of the state in 1215. The book examines the pressure placed on King John who was forced to promise that: ?No free man shall be arrested or imprisoned or disseised (dispossessed) or outlawed or exiled or in any way victimised, neither will we attach him or send anyone to attack him, except by the lawful judgment of his peers or by the law of the land.? ?The Economist? described that statement as ?good stuff? and ?a long way from the authoritarian tone of the Home Office and David Blunkett?. What an interesting comparison the worlds of 1215 and 2003 present - some clear insights of both times in history and how repetitive we seem to have become. It has been agreed that juries could work better by encouraging less evasion from jury service. Of course, better security would help to prevent nobbling by criminals, and tougher penalties would deter it. It?s interesting to see that to tamper with the fundamental principle, as Labour has found, runs the risk of being ?nobbled by the peers? who defeated the new Criminal Justice Bill provision to drop juries in nobbling and complicated fraud cases. What a comparison with the Barons at Runnymede in 1215 and the Life Peers at Westminster in 2003 when the book came out.

REFORMING THE CONSTITUTION IN THE SOCIAL CONTEXT:

The book remains a social treasure house which, when opened up, gives us glimpses of past decisions which we must continue to hold dear. The insights of that past are with us now and I can see a Blair epitaph hovering by for the day he retires: a written constitution. The question is will it be 2015, and a European Written Constitution 800 years after Magna Carta destroyed Norman excesses.

Or do we just settle for our rights being properly codified, as they had been in 1215, with a more convenient and comfortable twenty-first century model. The jury is out, and I wonder whether the peers will have their way again. Simon Jenkins was right ? this has been the best read of a long, not so hot summer.