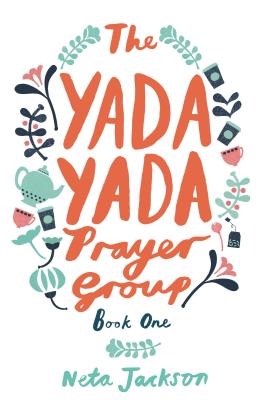 Jackson examines the many facets of forgiveness, grace, racial prejudice and healing in this enjoyable follow-up to "The Yada Yada Prayer Group." When a wildly diverse group of women gets together to pray, they have no idea how God's gonna rock their world. Read More

Jackson examines the many facets of forgiveness, grace, racial prejudice and healing in this enjoyable follow-up to "The Yada Yada Prayer Group." When a wildly diverse group of women gets together to pray, they have no idea how God's gonna rock their world. Read Less

All Editions of The Yada Yada Prayer Group

Who Is My Shelter?

The Yada Yada Prayer Group Gets Down

Couldn't Put It Down

This book is a great and fast read. It is about a group of women who couldn't be more differnet from each other and where that starting point leads. I could easily see myself in one of the characters and think that would be true for everyone. It's a great story about people, relationships, actions, and the part God plays in all these aspects. The good news for me is the story doesn't end in book one, and I am anxiouly awaiting book two to arrive.

My sister got me started on the Yada Yada Prayer Group Series. There are 7 books in the first Prayer series. I can't put them down and I am learning so much about prayer. The questions in the back of each book help me to focus on my own prayer life. Albris Books has made it affordable to get the entire series plus the second series at a great price, sometimes $.99 a book and I have shared them with my friends. We now have our own Yada Yada group going! Buy it!!

I have been enjoying the 7-book series of the Yada Yada Prayer Group very much! I whole-heartedly recommend any of the series.

i read the first book and then went out and bout 2-6with a gift card i got from christmas and have almost gotten through 3 out of the 5 done in almost a week. I can't put the books down once I start to read them!!!!!!

This was my first time reading Christian chick-lit. I wasn't sure what to expect, and I wouldn't have even bought it, except for the recommendations of friends.
At first, it didn't seem to be 'about' anything, just a bunch of seemingly mismatched women, who are thrown together at a Christian woman's conference. So I expected it to be about the characters; an ex-con, a former drug addict, a real estate broker, a college student, a married mom of two, and several others. But it was also about the group growing together as a prayer group, in spite of their differences, to become close friends. The problems in their lives were real, but they all learned what it meant to be "just a sinner, saved by grace."
I found the race issues to be very typically an American thing, though, with worshipping in either "white churches" or "black churches" and never having anyone from another race into your home. I couldn't relate to that. The author brings those issues up in the discussion questions at the end of the book, as well.
This book blind-sided me with a depth of emotion I didn't expect from the whimsical cover and title. It was a great introduction to a series that I didn't think I would be interested in, until now.