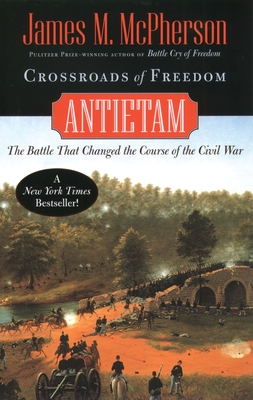 All Editions of Crossroads of Freedom: Antietam

Tried by War: Abraham Lincoln as Commander in Chief

Drawn with the Sword: Reflections on the American Civil War

Not So Much on the Battle

Basically only one chapter talks about the battle of Antietam. It does read quick, covers the Peninsula Campaign and the making of the battle. The book does cover the the angle of British and French recognizing the Confederacy and the Emancipation Proclamation. Altogether it was a good book for referencing the time of the battle. Yes, I would suggest this to someone interested in learning the basic of the battle, it does not go into detail of it though.

A New Birth Of Freedom And Its Cost

On September 17, 1862, the Army of the Potomac commanded by General George B. McClellan met the Army of Northern Virginia commanded by Robert E. Lee in the fields near Sharpsburg, Maryland. The result was the Battle of Antietam, the bloodiest day in American history and a pivotal moment of the Civil War. The battle ended the Confederacy's first invasion of the North and gave President Lincoln the opportunity to issue the Emancipation Proclamation.

In his short study, "Crossroads of Freedom" Professor McPherson weaves together many strands in discussing the significance of the battle. First, he places the battle against the backdrop of the prior military course of the war, both in the Eastern and the Western theaters. He points out how Union successes in the early part of 1862 were followed by serious defeats in the Seven Days Battle and Second Manassas with the tide of the war turning to the Confederacy. Although the South would again invade the North culminating in the Battle of Gettysburg, Antietam was a clear check to Southern momentum. It gave the Union the courage, will and political force to fight on.

Second, Professor McPherson emphasizes the role of the European powers -- England and France -- in the Civil War. These nations followed events in America closely and were economically at risk from the loss of Southern cotton for their textile mills. They likely would have recognized the Confederacy if the results of the first invasion of the North had favored the Confederacy.

Third, and probably most importantly to his theme, Professor McPherson discusses the role of Antietam in the changing character of the Civil War. President Lincoln was opposed to slavery, but his initial war aims did not include freeing the slaves. Rather he wished to hold the Union together. As the War continued, Lincoln became convinced of the necessity of issuing an Emancipation Proclamation but believed that he needed a military success to give the Proclamation force and credibility. The victory at Antietam, narrow as it was, and tremendous as was its human cost, gave him that opportunity.

Professor McPherson's book is part of a series called "Pivotal Moments in American History" whose aim is "to encourage interest in problems of historical contingency." There was a great deal of chance involved in the Battle of Antietam, more so than in most military campaigns. (There were also military blunders on both sides.) During the course of the southern invasion the Union discovered by chance a copy of General Lee's "Special Order No. 179" which had been dropped in a field. Special Order No. 179 detailed Lee's disposition of his troops and gave General McClellan the opportunity to attack in series each detachment of Lee's divided army. This was crucial to the result at Antietam. But McClellan missed the opportunity to win a decisive victory and bring an end to the War. Human error and chance play a great role in human events. But Professor McPherson might have done well to refer to Lincoln's Second Inaugural Address and compared Lincoln's reflections on the role of providence with the blind chance that led to the Union finding of Special Order No. 179.

There is only a short description of the battle of Antietam itself. The focus of the study is putting the Battle in its historical and political context rather than in a detailed analysis of military moves. Nevertheless, I found Professor McPherson's description of the battle (as well as his descriptions of the Seven Days Battle and Second Manassas) easier to follow than more detailed studies I have read. Professor McPherson gives a good annotated bibliography which refers the reader interested in a military study of the battle to more detailed accounts.

This is an excellent study of the Battle of Antietam which places it well in the context of the Civil War and which encourages the reader to reflect on the meaning of the War and of the nature of American freedom.

MacPherson's is at his usual scholarly and readable best. Concisely but accurately told account; a useful addition to a Civil War library.

All James' books are good reads. I enjoyed the large print as at the end of the day it is a big help.

I found this very informative and will take it with me on my trip to the Antietam battlefield. The photo's could of been more clear but I assume this is because of the paper they were printed on.