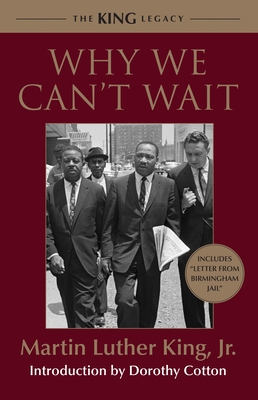 Why We Can't Wait

Often applauded as King's most incisive and eloquent book, "Why We Can't Wait" recounts the Birmingham campaign in vivid detail, while underscoring why 1963 was such a crucial year for the civil rights movement. The text also includes the extraordinary "Letter from Birmingham Jail," which King wrote in April of 1963. Read More

Often applauded as King's most incisive and eloquent book, "Why We Can't Wait" recounts the Birmingham campaign in vivid detail, while underscoring why 1963 was such a crucial year for the civil rights movement. The text also includes the extraordinary "Letter from Birmingham Jail," which King wrote in April of 1963. Read Less

All Editions of Why We Can't Wait

The words of Martin Luther King

A Knock at Midnight: Great Sermons of Martin Luther King

A new anthology on Martin Luther King's political philosophy, "To Shape a New World" (2018) edited by Harvard University professors Tommie Shelby and Brandon Terry has inspired me to read or reread the five books that King published during his life. Published in 1964, King's third book, "Why We Can't Wait" focuses on the 1963 Civil Rights campaign in Birmingham, Alabama. King and others had described Birmingham as the most segregated city in America. The national exposure the Birmingham Civil Rights Campaign received and the brutality of the police response under "Bull" Connor to the demonstrations led to the enactment of the Civil Rights Act of 1964.

King organized the book around his "Letter from Birmingham Jail" which forms the fifth of the work's eight chapters. Beginning in April, 1963, King had been leading a boycott of stores in downtown Birmingham and leading a voter registration drive and a series of demonstrations. The demonstrations had been going slowly , although many participants had been arrested. King decided to violate a local court order and to participate in a march anticipating his likely arrest. King was arrested and was held in jail for eight days and during his confinement wrote this "Letter".

King's "Letter" was a response to a published statement by eight Montgomery clergymen criticizing the ongoing Montgomery demonstrations as unwise and untimely and asking for a more moderate approach to change including negotiations with the city leaders. The statement criticized "outsiders", including King, getting involved and inflaming the situation in Montgomery. King gave an eloquent response which emphasized the long history of discrimination against African Americans and the pressing need for justice in Birmingham. King had been invited to Birmingham by the local civil rights leadership, but his response is much broader and discusses the moral responsibility to fight injustice where it occurs. King's Letter invokes what is known as natural law and discusses the ways of identifying the difference between "just" and "unjust" laws. As the Letter goes forward, King adopts an increasingly passionate tone, criticizes moderates and established churches for their timidity, and explains the need for African Americans to move forward to secure their right to human dignity. King's "Letter" has become a classic in American political thought and American literature.

The remainder of "Why We Can't Wait" is effectively organized around the "Letter". It gives King's own perspective of the history of the Birmingham movement just as his earlier book "Stride Toward Freedom" had given King's perspective on the 1955-1956 Montgomery Bus Boycott. The book is both a historical document and an explanation of the approach and goals of the Civil Rights Movement.

In the opening chapter King explores the significance of the year 1863, a century after the Emancipation Proclamation, for the outbreak of what he termed the Negro Revolution. King continues in the second chapter with a history of discrimination in the Reconstruction years and up to King's time, and discusses the considerations which led to the Birmingham campaign. King next describes segregated Birmingham under "Bull" Connor, a nemesis of the Civil Rights Movement, and then discusses the early stages of the Birmingham Campaign.

Following the "Letter" the book then continues with the involvement of the Kennedy Administration and a series of agreements reached with the business and political leaders of Birmingham. Unfortunately, the success of the agreement was short-lived, as a wave of violence from die-hard segregationists hit Birmingham, including the bombing of the 16th Street Baptist Church on September 15, 1963, which killed four young girls attending Sunday school. Only many years after the event and after King's death were participants in the bombing apprehended and brought to justice. In the final chapter of his book, King addresses the need for additional measures, including a form of reparations, to address the poverty and lack of opportunity plaguing African Americans. King also offers perceptive comments on Presidents Eisenhower, Kennedy, and Johnson and their strengths and weaknesses in the struggle for civil rights.

"Why We Can't Wait" is an extraordinary book and probably the best of King's five books. King worked carefully on the book and also had the assistance in its writing of several of his associates. The book offers King's own perspective on the Birmingham Campaign and its aftermath. In the "Letter" and throughout the book, King explains eloquently and passionately the necessity for the Civil Rights Revolution and the importance and nature of the philosophy and practice of nonviolence in securing just social change.