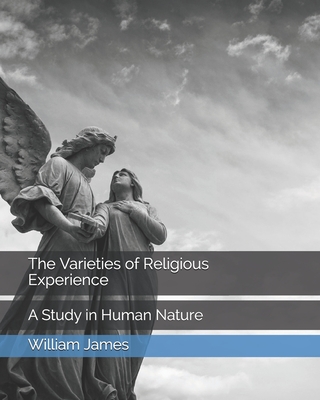 'Is life worth living? Yes, a thousand times yes when the world still holds such spirits as Professor James.' - Gertrude Stein A classic of American thought, William James' The Varieties of Religious Experience is an extraordinary study of human spirituality in all its forms and one of the most profound works of Psychology ever written. When the book was published in 1902 the study of the human mind was a thrillingly new field of scientific enquiry: James was one of the first to seriously examine the psychology of religious ... Read More

'Is life worth living? Yes, a thousand times yes when the world still holds such spirits as Professor James.' - Gertrude Stein A classic of American thought, William James' The Varieties of Religious Experience is an extraordinary study of human spirituality in all its forms and one of the most profound works of Psychology ever written. When the book was published in 1902 the study of the human mind was a thrillingly new field of scientific enquiry: James was one of the first to seriously examine the psychology of religious faith and where he led, both Jung and Freud would follow. Yet for all its historical significance, this is a book full of humanity, wit and some deeply personal stories of revelation, religious devotion and mystical experience. The Routledge Classics edition of The Varieties of Religious Experience makes available in paperback for the first time the Centenary Edition published by Routledge in 2002 with new introductions on the historical and contemporary significance of James' work and a foreword by the author's grandson, Micky James. Read Less

All Editions of The Varieties of Religious Experience: A Study in Human Nature

Talks to Teachers on Psychology: And to Students on Some of Life's Ideals

The Will to Believe and Human Immortality

The Critique of Pure Reason

The Idea of the Holy

The Sacred and Profane

The Principles of Psychology

William James's classic "The Variety of Religious Experience" (1902) consists of the text of the twenty lectures he delivered as the Gifford Lecturer at the University of Edinburgh in 1901 -- 1902. James took has his theme the exploration of "religious feelings and religious impulses."
In great detail, he studies how people who have had deep and, to them, convincing religious experiences describe these experiences and the meaning the experiences have for their lives. The book is, in fact, a wonderful mixture of psychology, description, and philosophy. The book is beautifully written, if dense, and needs to be pondered.

James is best-known as a pragmatist, but I found it helpful to approach the Varieties through phenomenology and personalism. Phenomenology was developed by the German philosopher, Edmund Husserl, a great admirer of James and his near-contemporary. It encouraged philosophers to develop understanding by looking to the things themselves rather than be seeing them in terms of rigid and imposed concepts. The Varieties takes a phenomenological approach in that it is in large part devoted to looking at religious activities, such as conversions, mysticism, saintly behavior, prayer, and seeing what they are and what they do without making commitments regarding the causes of the behavior. Thus, James rejects both reductionism (explaining religion in psychological terms as an allegedly aberrant behavior) and theological interpretations to concentrate on exploring the phenomena themselves.

James's book is also highly individualistic. In his second lecture he limits the scope of his inquiry by defining its object as "the feelings, acts, and experiences of individual men in their solitude, so far as they apprehend themselves to stand in relation to whatever they may consider the divine". Several things should be noted about the task James sets himself. James has little to say about communal forms of religion -- the churches, synagogues, mosques, and other institutions in which many believers practice. Indeed James is frequently criticized for skewing the range of religious activity that needs to be addressed in understanding religion. James's inquiry is also highly personal. It focuses on the response of individual men and women in their private and intimate feelings. In his concluding lecture, James writes: "so long as we deal with the cosmic and the general, we deal only with the symbols of reality, but as soon as we deal with private and personal phenomena as such, we deal with realities in the completes sense of the term." Shortly thereafter, he says "By being religious we establish ourselves in possession of ultimate reality at the only points at which reality is given us to guard. Our responsible concern is with our private destiny, after all."

With its focus on individual belief, James's book is pluralistic and shows an openness, which I find refreshing and modern, to many practices and creeds. James's approach has room for the traditional believer as well as for people, such as James himself, who have difficulty attaching themselves to a particular creed but who have a felt need for a spiritual life. Many people struggle and continue to struggle over this issue -- spirituality without an institution -- and they will feel comfortable with James. For myself, I found James's brief mentions of Buddhism, for one example, highly insightful. Although James disclaims knowledge of Buddhism he offers important comments on it in discussing meditation, pessimism, God (he acknowledges Buddhism as an atheistic religion) and karma. There are, however, many moments in this book when James's Protestant background and probably biases come through -- he sometimes is condescending to Catholic experience, and there is little treatment of Judaism in the Varieties.

The earlier chapters of the Varieties are philosophical in tone as James labors to define, explain and defend the nature of his inquiry. In the concluding chapters, James considers again philosophical and rationalistic approaches to religion and offers the briefest sketch of his own philosophy of religious and theological pluralism. The body of the book consists of long discussions of personal religious experiences from a variety of individuals and eras. James does bring a great deal of psychology to bear upon the descriptions, particularly when discussing the unconscious and in analyzing the different types of conversion experiences. The Varieties is best known for the distinction it draws between healthy-minded religion and the sick soul. The former James describes as "once-born" people who tend to see the universe as good throughout and in no need of redemption. (James gives an excellent discussion of Walt Whitman as a "once-born" type of religious believer.) The "sick soul" or twice-born person sees the need of understanding suffering and abandoning delusive behavior as necessary to spiritual redemption. James himself went through difficult and agonizing personal and religious experiences, but he finds value in both approaches and in their many variants. He truly offered a pluralistic approach to religion.

The Varieties wears its age remarkably well. The book does not aim to convert its readers. But it has a great deal to say of interest to both religiously inclined and secular people about the nature of the religious life. More importantly, I think the Varieties may help readers understand themselves and find their own paths to a rewarding life.