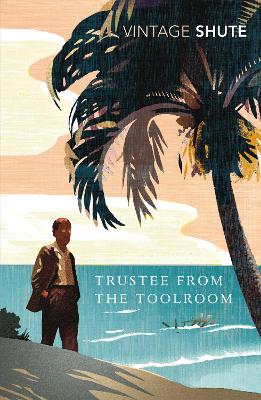 Trustee from the Toolroom

A novel, which among other things, explores the issue of class differences through the story of an orphaned child whose parents have asked for her to be sent to a working-class relative, rather than to richer relatives in Ireland. The author also wrote "A Town like Alice". Read More

A novel, which among other things, explores the issue of class differences through the story of an orphaned child whose parents have asked for her to be sent to a working-class relative, rather than to richer relatives in Ireland. The author also wrote "A Town like Alice". Read Less

All Editions of Trustee from the Toolroom

As usual, Nevil inter-weaves a succession of loosely associated events, gets the hero into an almost impossible situation and extricates him in an unexpected, and possibly unlikely way.
Nevertheless a good read

I'm a solid Nevil Shute fan. Mr. Shute didn't write about good vs evil, nor bad people vs good people. His stories are about good people caught in difficult circumstances. His protagonists are ethical, thoughtful, and refreshingly moral. In Trustee from the Toolroom, we have a self-effacing and seemingly unremarkable, childless engineer and his wife who suddenly must care for their niece. He faces difficult decisions about her future and, in solving her problems, find that his quiet skills and character propel him into a different future for them all.

My favorite novel by him is A Town Like Alice, and this one runs a close second. Right up there is The Breaking Wave (American title)/Requiem for a Wren (British title). Mr. Shute was an early engineer in the aviation industry, starting a small design and manufacturing company in England. He wrote novels on the side for relaxation. He moved to Australia during his last years to write full-time, dying of a heart ailment at age 61. His daughter reported that the stress he felt over the immorality filmmakers inserted into the movie version of On the Beach probably contributed to his demise. Several of his books were made into films (of special note: A Town Like Alice, a miniseries on PBS).

My husband was so pleased I was able to find this book for him, he sat right down and read it completely through. His own copy had been lent out and misplaced many years ago and he had been waiting until now before he could read it again. Thank you for having this book on hand where we could purchase and enjoy it once again. The plot was excellent and the characters and circumstances very real. Plus you could almost live the book as you read it. Thank you once again.

I read this book as a teen and loved it then; it is a great read now. Even though there is a lot of "technical" information about building the storage box and its placement, I did not feel threatened; in fact, I learned about the constructs and the basis for the procedures.

I would recommend this book to men and women alike. The central character's dedication to his project and seeing it through to the end - regardless of personal risk and cost - is inspiring.

I think this is one of his best books. Main character is humble full of integrity, and out of his comfort zone. What a great trip I took from London to the south seas and back. It was the perfect gift for my nephew when he graduated with his degree in Mechanical engineering. It is filled with technical detail and human interest.