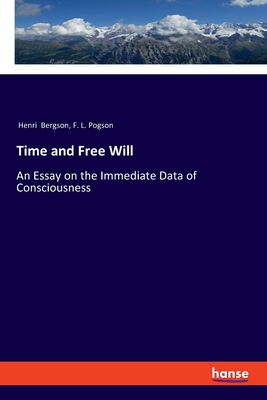 Time and Free Will: An Essay on the Immediate Data of Consciousness

Bergson argues for free will by showing that the arguments against it come from a confusion of different conceptions of time. He concludes that free will is an observable fact. Read More

Bergson argues for free will by showing that the arguments against it come from a confusion of different conceptions of time. He concludes that free will is an observable fact. Read Less

All Editions of Time and Free Will: An Essay on the Immediate Data of Consciousness

Laughter: An Essay on the Meaning of the Comic

An Introduction to Metaphysics

The Creative Mind: An Introduction to Metaphysics

Reading Bergson's Time And Free Will

Henri Bergson (1859 -- 1941) was the rare philosopher who received for a time a large popular following together with the Nobel Prize for Literature. From a time of great influence, Bergson's works fell into years of neglect. There has been a revival of late in his philosophy. Bergson's best-known book is "Creative Evolution" (1907). For all the popularity of this work, it is highly difficult to read. I have been fortunate to have the opportunity to participate in a reading group on Bergson in which we have read his first book, "Time and Free Will" and will soon begin the second, "Matter and Memory". These two book together with "Creative Evolution" are best read in sequence to try to understand Bergson.

"Time and Free Will" (1889) was Bergson's doctoral dissertation. An epigraph from Plotinus frames the book and offers an elliptical suggestion of its content: " If a man were to inquire of Nature the reason of her creative activity, and if she were willing to give ear and answer, she would say Ask me not, but understand in silence, even as I am silent and am not wont to speak." The book focuses on free human creativity and on the inadequacy of language for its expression and understanding. Bergson is at the outset seeing philosophy far differently than the linguistic philosophy and the "linguistic turn" that soon was to become prevalent in England and the United States.

F.L. Pogson, the authorized translator of the book into English (1910), says in his Preface explaining the nature of Bergson's project:

"The method which he pursues is not the conceptual and abstract method which has been the dominant tradition in philosophy. For him reality is not to be reached by any elaborate construction of thought : it is given in immediate experience as a flux, a continuous process of becoming, to be grasped by intuition, by sympathetic insight. Concepts break up the continuous flow of reality into parts external to one another, they further the interests of language and social life and are useful primarily for practical purposes. But they give us nothing of the life and movement of reality ; rather, by substituting for this an artificial reconstruction, a patchwork of dead fragments, they lead to the difficulties which have always beset the intellectualist philosophy, and which on its premises are insoluble."

Bergson's own Introduction explains how the problem of free will rests upon certain confusion, particularly between time as succession in space and an internalized time as duration, that his book aims to dispel. Bergson writes:

"What I attempt to prove is that all discussion between the determinist and their opponents implies a previous confusion of duration with extensity, of succession with simultaneity, of quality with quantity : this confusion once dispelled, we may perhaps witness the disappearance of the objections raised against free will, of the definitions given of it, and, in a certain sense, of the problem of free will itself."

The book is in three parts. In the first, Bergson analyzes mental and emotional states and argues that the intensity of feelings are properly qualitative and not quantifiable. In the second part, Bergson argues that conscious states form a seamless, non-verbal, non-discrete succession in duration which he distinguishes from a spatial conception of time as separable instances. The concept of number, for Bergson, is part of a spatial conception of time as discrete, separable, repeatable points. Spatial time forms the basis for mathematics, science, and most of the actions of everyday life.

In the book's third part, Bergson argues that conceptions of causality and determinism apply to spatial time and not to time in duration. Durational time allows for human freedom. One is lost when one tries to define freedom as definitions are products of conceptualizaion and spatialization rather than of duration and succession.

Bergson relies on a combination of introspection, an analysis of the psychology of his day, his understanding of the nature of number and of mathematics, and argument to explain his position, punctuated by beautiful evocative writing and metaphor. Much of this material is clogged and difficult to follow. The arguments and analyses appear to be intended suggestively as, by Bergson's own position, they are beyond and prior to reason and proof. Obscure as this account is, it offers a sense of reality and meaning beyond science and the quotidian. The aim is sufficiently suggestive and alluringly put to have influenced many, on at least a rudimentary level, including many writers and artists.

Bergson's philosophy aims to upend the more usual philosophical accounts of space and time, such as those offered by Aristotle or Kant, together with common sense. There were those swept away by this book and by Bergson's successor books notwithstanding their obscurity. "Time and Free Will" is a book that to me is unconvincing as a whole but that is evocative and suggestive. I learned from struggling with the book and from discussing it with fellow readers in my online class.