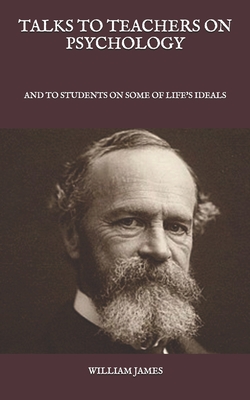 Talks to Teachers on Psychology: And to Students on Some of Life's Ideals

Despite the modesty of its title, the publication of this book in 1899 was a significant event. It marked the first application of the relatively new discipline of psychology, and specifically of James's theses in The Principles of Psychology , to educational theory and classroom practice. Read More

Despite the modesty of its title, the publication of this book in 1899 was a significant event. It marked the first application of the relatively new discipline of psychology, and specifically of James's theses in The Principles of Psychology , to educational theory and classroom practice. Read Less

All Editions of Talks to Teachers on Psychology: And to Students on Some of Life's Ideals

The Will to Believe and Human Immortality

The Metaphysical Club: A Story of Ideas in America

Beginning in 1891, William James gave frequent lectures to teachers in which he explained the psychology he had developed in his "Principles of Psychology" and offered suggestions on applying the science of psychology to the art of education. Similarly, beginning in 1895, James delivered a series of lectures to college students -- generally at schools for women -- on education and its purposes. In 1899, James gathered both sets of lectures together and published them as "Talks to Teachers on Psychology and to Students on Some of Life's Ideals." The book was read widely and became financially successful for James.

In his illuminating recent biography of James, "William James in the Maelstrom of American Modernism", Robert Richardson describes the "Talks" as a whole as "written in what we may call William James's third style." He explains: "The third style is his plainest, clearest, most public style. It is at once vivid, personal, comprehensible, and without a shred of condescension. It is best exemplified in 'Talks to Teachers'. The longer James worked over a subject, the simpler and shorter and more direct he made it". (p. 360)

The two sets of lectures are complementary with the first set explaining to teachers how psychology could be of use in the educational process while the second set explains to the students the value of the educational opportunities presented to them. The "Talks to Teachers" begins with what many people at the time saw as a mechanistic psychology rooted in physiology and developed in light of Darwin's theory of evolution. In many places, James encourages teachers to see a pupil in part as "a subtle little piece of machinery." An effective means of education endeavors to work with rather than against the nervous system. In successive short chapters, James discusses his fundamental theory of the "stream of consciousness" and applies it to learned behavior through exploration of reactions, habits, association, attention and memory. The lectures are lucid and clear and show both flexibility and wisdom in considering the process of education.

James's focus throughout is on education as an activity fitting the student for the conduct of life in a wide variety of situations rather than as means of learning intellectual abstractions. James stresses the importance of the body and of physical activity in the learning process. His psychology begins with science and mechanism but it does not end there. I would like to point out two of what I found to be among the insightful observations of the "Talks to Teachers." First, in the chapter on "Memory", James points out that the psychological abilities of the mind must be taken together in an individual and that a person need not be "cast down" by deficiencies in any single element. James stresses passion and desire as critical in overcoming any mechanical difficulties. He writes: "You can be an artist without visual images, a reader without eyes, a mass of erudition with a bad elementary memory. In almost any subject your passion for the subject will save you. If you only care enough for a result you will almost certainly attain it."

The other passage in the "Talks to Teachers" I wish to single out is in the concluding chapter on "The Will". Here James allows Spinoza to have the last word. James points out that there are two ways in which people can make choices: by saying "no" to something or by saying "yes" to its contrary. James opts for the latter approach. James writes: "Spinoza long ago wrote in his Ethics that anything that a man can avoid under the notion that it is bad he may also avoid under the notion that something else is good. He who habitually acts sub specie mali, under the negative notion, the notion of the bad, is called a slave by Spinoza. To him who acts habitually under the notion of good he gives the name of freeman. See to it now, I beg you, that you make freemen of your pupils by habituating them to act, whenever possible, under the notion of a good". This is wise advice, from both Spinoza and William James.

The second part of the book consists of three wonderful addresses to students: "The Gospel of Relaxation", the seminal essay "On a Certain Blindness in Human Beings" and its companion essay "What Makes a Life Significant." The first essay is a still timely corrective to the tendency of many Americans to stress and to wrongly-directed effort. But second and third of these essays are critical to James's work in its entirety. The "blindness" to which James refers is the difficulty every person has in knowing the mind of another and in properly and sympathetically valuing what the other person finds important and significant in life. As James states in his Preface to "Talks to Teachers": "The facts and worths of life need many cognizers to take them in. There is no point of view absolutely public and universal." James develops this theme through the use of literary examples drawn from Robert Louis Stevenson, Whitman, Tolstoy, and many other writers.

In the Preface to the "Talks to Teachers and Students" James also underscores the importance of the essay "On a Certain Blindness". This essay is James's most direct statement of the value of pluralism, individualism, and democracy. He writes: "The practical consequence of such a philosophy is the well-known democratic respect for the sacredness of individuality -- is, at any rate, the outward tolerance of whatever is not itself intolerant. ... Religiously and philosophically, our ancient national doctrine of live and let live may prove to have a far deeper meaning than our people now seem to imagine it to possess."

This short and beautifully written collection of essays is an excellent non-technical introduction to the thought of William James.