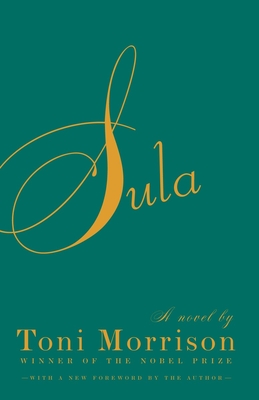 'Extravagantly beautiful... Enormously, achingly alive... A howl of love and rage, playful and funny as well as hard and bitter' New York Times As young girls, Nel and Sula shared each other's secrets and dreams in the poor black mid-West of their childhood. Then Sula ran away to live her dreams and Nel got married. Ten years later Sula returns and no one, least of all Nel, trusts her. Sula is a story of fear - the fear that traps us, justifying itself through perpetual myth and legend. Cast as a witch by the people ... Read More

'Extravagantly beautiful... Enormously, achingly alive... A howl of love and rage, playful and funny as well as hard and bitter' New York Times As young girls, Nel and Sula shared each other's secrets and dreams in the poor black mid-West of their childhood. Then Sula ran away to live her dreams and Nel got married. Ten years later Sula returns and no one, least of all Nel, trusts her. Sula is a story of fear - the fear that traps us, justifying itself through perpetual myth and legend. Cast as a witch by the people who resent her strength, Sula is a woman of uncompromising power, a wayward force who challenges the smallness of a world that tries to hold her down. 'What a force her thoughts have been and how grateful we must be that they were offered to us in this extremely challenging age' Alice Walker, Guardian BY THE NOBEL PRIZE-WINNING AUTHOR OF BELOVED Winner of the PEN/Saul Bellow award for achievement in American fiction Read Less

All Editions of Sula

The Source of Self-Regard: Selected Essays, Speeches, and Meditations

I have been emphasizing reading history and philosophy recently because I thought I had been reading too many novels. I thought, and still do on the whole, that my nonfiction reading was giving me more understanding of the human condition than stories. Toni Morrison's novel "Sula" (1973)brought me back to the poignancy, beauty, and depiction of life's difficult ambiguities that fiction at its best can achieve. Sula is a poetic, difficult, and heartrending short book. In its portrayal of African American women and the tension between sexuality and independence it reminded me of Zora Neale Hurston's novel "Their Eyes were Watching God" (1937). A less obvious parallel to "Sula" is Tennessee Williams. His plays, with their portrayal of both sexual freedom and sexual repression mirror the themes of Morrison's novel.

"Sula" is set in a segregated African American community on a hill in the town of Medallion, Ohio, overlooking the white part of the town located in the more prosperous valley. The story is told chronologically and set in two parts. The first part covers the years 1919-1927. Following a break of ten years, the second part covers the years 1937-- 1941, with a final chapter taking place in 1965. The African American community or "Bottoms" with its small four-block commercial strip called Carpenter's Row with its pool hall, ice cream parlor, hairdresser ("Irene's Palace of Cosmetology") and theater is itself the major character of this novel. In addition to the town, the book focuses on the life long friendship between two women with contrasting backgrounds and approaches to life. The title character, Sula, is raised by her grandmother, Eva, who has lost a leg in mysterious circumstances and by her mother, Hannah. Eva's husband Boyboy abandoned her with three children after five years of marriage and Hannah's husband died. Both Eva and Hannah enjoy the company of men and the latter is promiscuous.

Sula's friend Nel is the product of a conservative, stable home with traditional values. Her mother, Helene, was, however, the daughter of a Creole prostitute in New Orleans and Helene was raised by her grandmother. Early in the book, Helene and Nel travel south to attend Helene's grandmother's funeral, a trip which has a lasting influence on Nel, even though, for the remainder of her long life Nel never leaves the Bottoms again. Nel marries a man named Jude while Sula attends college away from Medallion followed by a series of short affairs in many large cities. During the period of their girlhood, their friendship is forged by guilt and by repeated violence involving Eva, Hannah, and the two girls themselves.

The second part of the book begins after Sula returns to the Bottoms after ten years away. She has stormy, exposing scenes with both her mother Eva and Nel and is scorned by the town because she sleeps indiscriminately with all the men. Much of the second part of the book is internalized as Morrison's characters explore their motivations, pasts, and relationships to each other.

A great deal of the story is told elliptically, symbolically, and through indirection. Many passages will bear several rereadings to be understood. For example, a key event in the story occurs in the aftermath of one of the incidents of violence involving Sula. In a state of shock and incomprehension, Sula visits a mad, isolated WW I veteran, Shadrack, who lives by himself in an old shack along the river. Sula is frightened by what she has done and frightened by Shadrack. During the visit, Shadrack says only the one word which is the title of this review. Morrison recounts the incident twice, the first time from the perspective of Sula when it occurs and the second time, years later, from the perspective of Shadrack. This enigmatic, haunting incident and the event on which it is based is at the heart of the novel.

The book is short but makes use of foreshadowing as events and themes touched upon at one point of the story come to be seen of great significance further on. The tone of the book is meditative. Unlike some readers, I found the book for the most part unideological. Morrison details relationships between African Americans and whites over the first half of the Twentieth Century and explores tensions between sexuality, convention, love, and loneliness that are part of racial issues but that also have meaning on their own. The book left me with a feeling of sorrow and loss and with a renewed appreciation of why I read novels.

Something Else to Be

Toni Morrison's second novel is a coming-of-age tale and lyric poem of black female identities, focusing on the friendship of Sula Peace and Nel Wright, and three generations of women in their respective families from 1919 through the post-World War II period. Because "They were neither white nor male," they "set about creating something else to be." Both live in "The Bottom," and place itself functions as both character and choral voice to express the town's views of sex, madness, and suicide. The novel opens with a darkly ironic naming story of The Bottom, and ends with its collapse. While Nel reverts to a more traditional domesticity, Sula is determined to forge an autonomous self in the face of a condemnatory community and leaves The Bottom for a decade. In its examination of classic themes of good and evil, the novel forces the reader to revise his or her perspective of the two main characters. it concludes on a cry of sorrow and loss, but in a way that may surprise the reader. Morrison's prose sings and the novel is peopled with unforgettable characters like Eva Peace, Shadrack, the deweys, Plum and the eponymous protagonist. While this book lacks Song of Solomon's epic scope, it's possible the Nobel Prize-winning author never wrote more beautifully.