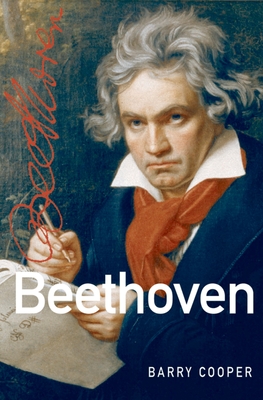 In a departure from traditional studies, Cooper incorporates the latest international research on many aspects of the composer's life and work and presents these in a truly integrated narrative. The chronological approach enables work to be seen against the musical and biographical background from which it emerged. 8 pages of b&w plates, music examples. Read More

In a departure from traditional studies, Cooper incorporates the latest international research on many aspects of the composer's life and work and presents these in a truly integrated narrative. The chronological approach enables work to be seen against the musical and biographical background from which it emerged. 8 pages of b&w plates, music examples. Read Less

All Editions of Beethoven

The Beethoven Compendium: A Guide to Beethoven's Life and Music

The End of History: An Essay on Modern Hegelianism

Beethoven and the Creative Process

Guide to the Pianist's Repertoire

Beethoven: The Composer as Hero

by Philippe A. Autexier

Beethoven: The Music and the Life

The work of great artists is inexhaustible. In Beethoven's case, his music remains a stunning achievement. His achievement as a composer, together with his character, his deafness, his thwarted love affairs, and his relationships to his musical predecessors and successors, has led to a fascination with him and to a literature that is likely to be written and rewritten as long as people listen to music. As is Beethoven's music, Beethoven's life and character, and the means by which one is to understand them, are open to a multitude of approaches.

In his Preface, Cooper writes (at x) that "surprisingly little is known for certain about Beethoven." He points out that some studies, such as Maynard Solomon's fine biography that appeared shortly before Cooper's own, featured a psychoanalytical approach to Beethoven that attempted a fuller explanation of Beethoven's character than those that had been attempted by other writers at the cost of questionable psychological theory and speculation in the face of a scarcity of evidence. Cooper endeavors to write a biography that holds closer to the known facts about Beethoven's life and to emphasize those facts that may shed life on his activities as a composer.

Cooper also spends a great deal of his book discussing the music itself. He offers lengthy accounts of the origins of the symphonies, concertos, quartets, sonatas, songs, masses, of his only opera,"Fidelio", and of the folksongs and other parts of Beethoven's output. The book includes generous musical analyses and quotations. I was particularly impressed with Cooper's attention to some of Beethoven's work that is not as well known as it deserves to be, such as the Opus 7 piano sonata, the "Creatures of Prometheus" ballet, and the oratorio, "Christ on the Mount of Olives". These works are analyzed insightfully and lovingly.

As Cooper acknowledges, his study is perhaps less detailed than is Solomon's on Beethoven's life. His book does, however, offer its own perspective on Beethoven. Broadly speaking, Cooper is more sympathetic to certain aspects of Beethoven's actions than has been the case with many other writers. Unlike Solomon, Cooper takes Beethoven's side, for the most, part, in his dispute with his sister-in-law over the custody of Karl, Beethoven's nephew. Also, he disputes Solomon's account that Beethoven frequented prostitutes. In both these matters, I am not sure that Cooper has the better of the evidence. The portrayal endeavors to see Beethoven favorably without making him something different than a human being with fallibilities.

I also found interesting Cooper's discussion of Beethoven's religious views. Beethoven's views on such matters, as is the case with the views of any thinking person on these matters, were highly personal and difficult for a third party, such as a biographer writing 250 years after the fact, to ascertain and expound. Cooper acknowledges that Beethoven was not for most of his life a practicing Christian but finds him a devout believer in God as the source of human morality. Solomon's account emphasizes more Beethoven's predilection towards the Enlightenment. It remains a difficult question, and I suspect that Beethoven had components of both views in him.

Too many recent biographers feel a need to deprecate their subjects. This is definitely not Cooper's approach to Beethoven. Cooper writes of Beethoven that "despite much sniping from twentieth-century critics, his reputation as a giant among composers remains intact as we enter the twenty-first century." (Preface x)

Cooper's study is not hero-worship, but it presents an inspiring and historically plausible account of a composer and a man who is worthy to be revered for his vision, attainments and character. This book will be treasured by those who love Beethoven's music. May it encourage the reader to become acquainted or reacquainted with these works of the human spirit.

Excellent biography of a life in music

The great Beethoven biography is Thayer-Forbes (A.W. Thayer as annotated and expanded by Elliot Forbes), and it remains the standard. But Cooper's book acts as a gentle corrective to Thayer-Forbes, adducing much new evidence (based, for example, on improved analysis of the sketchbooks) and providing a more speculative but also more vivid description of Beethoven's thoughts, feelings, and intentions. Moreover, Cooper has folded discussion of Beethoven's music directly into the narration of his life; this is unusual in the Master Musicians series, but Cooper pulls it off admirably. As part of this approach, Cooper is clear about the probable order in which Beethoven's works were written, and I've enjoyed listening to each piece in that order in conjunction with reading the book. I don't always agree with his precise assessment of why a given piece is significant, and I find some of his musical conclusions a bit far-fetched. But Cooper has made all of Beethoven's music more interesting to me (if that's possible), especially the "minor" works - Cooper is also the author of a large book urging that Beethoven's usually neglected arrangements of British folk songs should be taken much more seriously. A very good synthesis of Beethoven's life and work, but not by any means an appreciation for musical beginners - don't expect to learn how sonata form works or what a rondo is if you don't already know.