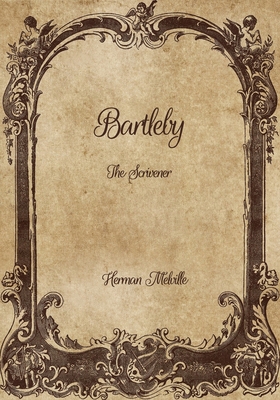 The narrator of this tale of corporate discontent is an elderly lawyer who runs a profitable business handling the official financial paperwork of wealthy men. He hires Bartleby, a dispirited-looking notary, as an additional member of his staff. One day Bartleby is asked to proofread one of the documents he copied to which he simply replies that he would prefer not to. This is only the first of many refusals to the narrator's dismay and the disapproval of the other employees. Bartleby continues to participate less and less ... Read More

The narrator of this tale of corporate discontent is an elderly lawyer who runs a profitable business handling the official financial paperwork of wealthy men. He hires Bartleby, a dispirited-looking notary, as an additional member of his staff. One day Bartleby is asked to proofread one of the documents he copied to which he simply replies that he would prefer not to. This is only the first of many refusals to the narrator's dismay and the disapproval of the other employees. Bartleby continues to participate less and less in the office work. The narrator makes many efforts to deal with him, but Bartleby refuses to perform his duties. Soon he is not working at all, and since the narrator cannot get him to leave, he moves his offices to a new location to avoid a wasted reputation. But Bartleby takes up a kind of residence at the old place, and the new tenants ask for the narrator's help. When Bartleby is forced out of the offices, he roams the hallways. The narrator makes one final attempt to reason with him, but Bartleby rejects him. The narrator is away from work a few days, and when he returns he discovers that Bartleby has been put in prison. The narrator visits him there, finding him more sullen than usual. He bribes a guard to make sure he is well fed. The narrator returns a few days later to learn that Bartleby has died, having preferred not to eat. This well-written treatment has made Bartleby one of literature's most forsaken characters, illustrating life's tiring and rigorous process, full of deadening compromises and obedience to inconsequential labor Read Less

All Editions of Bartleby the Scrivener

Moby Dick or the Whale

Billy Budd, Bartleby, and Other Stories

The Turn of the Screw

I first read Herman Melville's short story "Bartelby, The Scrivener" many years ago as a third-year law student. I had already become deadened with the study of law books and would leave the law late in the evenings for the large undergraduate library to read. There I found "Bartelby". With its portrayal of the drudgery of a mid-nineteenth century law office in Manhattan and of the loneliness of city life, "Bartelby" was not the most welcoming introduction to the profession and culture I was about to join. Still, I had been looking forward to the career and to a life within the system, as it was called then, rather than to a life of social anger and alienation as a critic of American culture propounding the sort of critiques that were common in the 1960s and early 1970s and remain so today. I worked for several years in a large law firm and then worked for 30 years for the Federal government before retiring.

In the intervening years, I thought about "Bartelby" many times and talked about it with family, friends, and colleagues. The book stayed with me, in the law office and out. I also returned frequently to other works of Melville. I recently revisited "Bartelby" in the context of reading a new book of essays about Melville in preparation for writing a review. While thinking about the essays, I decided first to set down my own thoughts about "Bartelby".

"Bartelby" has become a much-read work. It is taught in college and high school and is the subject of uncountable academic commentaries. Melville's story has also entered popular culture in films and other ways. I have read in the literature about "Bartelby" but the goal is to keep the work fresh as it was when I read it and unencumbered by the commentaries that have shaped much of my other reading over the years. Melville's story is told in jargon-free language, unlike the language of many critics, but it remains enigmatic and thoughtful. Readers should tease out its meaning for themselves in their own lives.

The story is narrated in the first person by a "rather elderly man", a lawyer. He is not a litigator but instead spends his time with preparing complex legal documents such as contracts, wills, or deeds. In the 1850s these documents, sometimes running into hundreds of pages, had to be laboriously copied by hand by scribes, called scriveners. The narrator has a sharp, observant, judgmental eye and describes his experiences with two scriveners and a "go-for" in his employ. When he needs another scrivener, he hires a young, tall, quiet man, Bartelby. While Bartelby first applies himself to the task at hand, he soon responds to his employer's request to perform work-related tasks with the phrase "I would prefer not to", a response that has become classic in literature. As the novel progresses, Bartelby becomes increasing obstinate and the lawyer increasing frustrated. Bartelby is homeless and is found spending his nights in the law office where he subsists on nuts and cheese. The narrator is a decent sort and tries to help Bartelby but here too he is turned away with the phrase "I would prefer not to". The lawyer is driven to find another office and Bartelby is ultimately carried away as a vagrant to the Tombs where he soon dies. The narrator hears stories of Bartelby's lost earlier life working in dead-letters at the post office. The lawyer's final observation is: "Ah Bartelby! Ah humanity"! They are words of compassion.

When I read the story years ago, I saw it as showing loneliness and the sense of frustration in the lives lived by many. Melville, was not fond of the type of life he portrayed in "Bartelby". Still, the book was not entirely off-putting in its portrayal of urban life and of life in a law office. There is a sense of necessity in the book which presents its story as part of the human condition rather than as a consequence only of American culture and society which could be changed and cured. The story assumes a religious cast as the narrator reflects on his experiences, reads the various views of theologian Jonathan Edwards and scientist Joseph Priestly on the nature of necessity and thinks about the Biblical injunction: "A new commandment give I unto you, that ye love one another." The narrator finds a sense of compassion in his own lonely life that he hadn't had before.

The story over the years I think taught me about loneliness and solitude but also about promise. I think it helped cultivate in me a sense of detachment while reinforcing the value of work and of carrying on in the everyday world in which one finds oneself which too has its value. It is a book of sadness and hope which has stayed with me. "Bartelby" finds its readers among the young. It is a story to be taken to heart individually and personally.