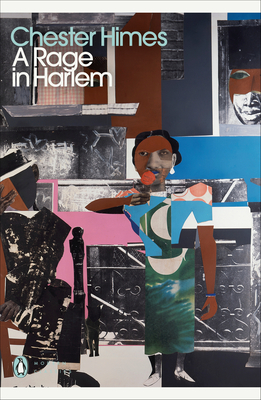 A Rage in Harlem

A dark and witty work of hardboiled detective fiction set in the mean streets of New York, Chester Himes's A Rage in Harlem includes an introduction by Luc Sante in Penguin Modern Classics. Jackson's woman has found him a foolproof way to make money - a technique for turning ten dollar bills into hundreds. But when the scheme somehow fails, Jackson is left broke, wanted by the police and desperately racing to get back both his money and his loving Imabelle. The first of Chester Himes's novels to feature the hardboiled ... Read More

A dark and witty work of hardboiled detective fiction set in the mean streets of New York, Chester Himes's A Rage in Harlem includes an introduction by Luc Sante in Penguin Modern Classics. Jackson's woman has found him a foolproof way to make money - a technique for turning ten dollar bills into hundreds. But when the scheme somehow fails, Jackson is left broke, wanted by the police and desperately racing to get back both his money and his loving Imabelle. The first of Chester Himes's novels to feature the hardboiled Harlem detectives 'Coffin' Ed Johnson and 'Grave Digger' Jones, A Rage in Harlem has swagger, brutal humour, lurid violence, a hearse loaded with gold and a conman dressed as a Sister of Mercy. Chester Himes (1909-1984) was born in Jefferson City, Missouri and grew up in Cleveland. Aged 19 he was arrested for armed robbery and sentenced to 20 to 25 years in jail. In jail he began to write short stories, some of which were published in Esquire. Upon release he took a variety of jobs from working in a California shipyard to journalism to script-writing while continuing to write fiction. He later moved to Paris where he was commissioned by La Serie Noire to write the first of his Harlem detective novels, A Rage in Harlem, which won the 1957 Grand Prix du Roman Policier, and was adapted into a 1991 film starring Forest Whitaker and Danny Glover. If you enjoyed A Rage in Harlem, you might like Raymond Chandler's The Big Sleep and Other Novels, also available in Penguin Modern Classics. 'The greatest find in American crime fiction since Raymond Chandler' Sunday Times Read Less

All Editions of A Rage in Harlem

If He Hollers Let Him Go

Blind Man with a Pistol

Yesterday Will Make You Cry

Chester Himes' 1957 novel, "Rage in Harlem" offers a tough, unsentimental, and visceral look at the people, streets, and places of Harlem in the 1950s. His description of Harlem is detailed and intimate on a street-by-street, place-by-place basis. Himes can describe a place precisely and closely, but he can also compound image on image in long, heavily enjambed sentences, which reminded me of Walt Whitman. The story takes place in Harlem's tenements, streets, alleys, bars, brothels, train stations, hotels, gambling houses, and businesses. Himes knows them all. He writes of Harlem in lengthy paragraphs and in short one-liners. Here is an example of the former:

"Looking eastward from the towers of Riverside Church, perched among the university buildings on the high banks of the Hudson River, in a valley far below, waves of gray rooftops distort the perspective like the surface of a sea. Below the surface, in the murky waters of fetid tenements, a city of black people who are convulsed in desperate living, like the voracious churning of millions of hungry cannibal fish. Blind mouths eating their own guts. Stick in a hand and draw back a nub. That is Harlem."

And here is an example of the latter, as Himes describes the environs and people in Harlem's 125th Street train station:

"Whores buzzed about the area like green flies over stewing chitterlings."

Trains play a large role in the portrayal of Harlem. They are used, for example, below, in a climactic scene in which a main character, a scoundrel named Goldy, who makes his living impersonating a nun on Harlem's streets, is murdered brutally.

Harlem is the primary character of this novel, even though the book offers a tangled noir story of crime, scams, and killings together with many sharply described people. The major character, Jackson, 29, has come to Harlem from the South and is hardworking, religious, naive and gullible. Jackson works at a funeral parlor and is caught in scams by his femme fatale ladyfriend, Immabelle, and forced to engage in a series of robberies and crimes. Jackson is unswervingly loyal to and trusting of Immabelle. Jackson's twin brother, an addict named Goldy, impersonates a nun in the Sisters of Mercy and sells tickets to heaven on the streets. Jackson, Imabelle, and Goldy become involved in counterfeiting and goldmine scams. The African American detectives Coffin Ed Johnson and Grave Digger Jones also become involved. There is a great deal of acerbic humor as well as violence as the story proceeds. The dead bodies pile up, as in Elizabethan tragedy.

Besides the descriptions of places and people, "Rage in Harlem" includes several scenes of fights and rumbles, including a long passage set in a deserted, forbidding Harlem street formerly in a building formerly used by the Father Divine movement. The scenes of action in the book, for me, tended to become chaotic in places and to slow the book down. Unusually enough, the plot components are more background for the descriptions of Harlem than the latter are backdrops for a noir story.

Himes' book offers the feel of understanding Harlem from the inside. Yet, when Himes (1909 -- 1984) wrote this work, he was living in exile in France. For many years, Himes was more appreciated in France than in his native United States. Himes' novel was used as the basis for a movie starring Robin Givens as Immabelle. The book will fascinate readers interested in the African American experience, Harlem, or noir literature.