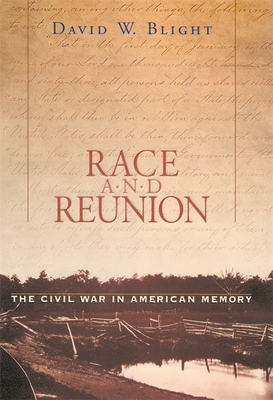 In this history, Blight delves deeply into the shifting meanings of death and sacrifice, Reconstruction, soldiers' reminiscences of battle, the idea of the Lost Cause, the ritual of Memorial Day, and resurrects African-American voices and memories of the war and the efforts to preserve the emancipationist legacy in the midst of a culture built on its denial. 32 halftones. Read More

In this history, Blight delves deeply into the shifting meanings of death and sacrifice, Reconstruction, soldiers' reminiscences of battle, the idea of the Lost Cause, the ritual of Memorial Day, and resurrects African-American voices and memories of the war and the efforts to preserve the emancipationist legacy in the midst of a culture built on its denial. 32 halftones. Read Less

All Editions of Race and Reunion: The Civil War in American Memory

A Slave No More: Two Men Who Escaped to Freedom, Including Their Own Narratives of Emancipation

American Oracle: The Civil War in the Civil Rights Era

A Short History of Reconstruction

This Republic of Suffering: Death and the American Civil War

Is "history" reality or memory?

A nation?s memory is composed of many facets some of which are mythical while others are more accurate. David W. Blight?s book examines in detail how American memory of the Civil War during the period from 1863, the war?s turning point, to 1915, its semicentennial, was constructed. His dissection of this memory revolves around his primary theme of the interplay of race and reunion and how reunion triumphed over emancipation: Southern white-supremacists joined with Northern and Southern reconciliationists to overcome emancipationists? efforts. He analyzes in detail the various facets of the composition and formation of this memory providing a valuable avenue for understanding the fifty-two years he covers and also insights to American racial history to the twenty-first century.

Race and Reunion uses many primary sources covering a broad range of thought, including fiction and nonfiction, which gives his book give a comprehensive view of the many aspects of the memory of the war. Several of these sources show the surprising overt intention of some Southerners soon after the war to ensure that not only would Reconstruction be overthrown but that the South would return to the status quo antebellum by promulgating its view of the war. Politics helped sink radical Reconstruction and efforts of Southern writers and historians ensured that the Southern view of history would prevail. Slavery could not be reinstituted, but the subservient relationship of blacks could, and through the efforts of Southern writers, orators, politicians, and much physical violence, it was. Jim Crow laws then ensured resubjugation of blacks.

Southern women?s groups, writers in periodicals such as the Southern Magazine and later the papers published by the Southern Historical Society, joined with unreconstructed rebels such as former General Jubal A. Early to attempt ?to vindicate Southern secession and glorify the Confederate soldier ? [and] to launch a propaganda assault on popular history and memory (p. 79).? Some Southern authors even made the amazing argument that had the North not begun the war, the South would have ended slavery on its own. In addition, because the North, especially New England, was responsible for transporting slaves from Africa to America, it was more blameworthy than the South for the institution of slavery; therefore, since all shared responsibility and blame, neither section should be singled out.

The Southern ?Lost Cause? school formed to help Southerners cope with the devastating military and economic losses and to ensure that its military loss would not carry over to political and social arenas. It joined with the romantic ?moonlight and magnolia? view in the late nineteenth century which was epitomized by D.W. Griffith?s 1915 Birth of a Nation film epic. The film graphically portrayed virtually all of the stereotypes espoused by the Lost Cause school most importantly showing how child-like blacks adhered to the Southern cause and detailed the ?evils? of Radical Republican Reconstruction which included black rule, Northern Carpetbaggers, and Southern Scalawags.

One of the chief tenets of the Lost Cause school was its portrayal of black slaves by writers such as Nelson Page as faithful, loyal workers and servants who actually benefited by slavery. Slavery took untutored, uneducated, pagan, non-English speaking savages and gave them Christianity, the English language, and worthwhile skills needed to become civilized. Here, slaves loved their masters and were better off under slavery than they were under Reconstruction.

The white Southern efforts to restore its antebellum weltanschauung succeeded for many reasons, the primary one being the desire found in most white Americans to come to a final resolution for the devastation and death brought by the war. Once both sides passed the initial period of shock and anger immediately after the war, moves towards reconciliation began especially among veterans. The Lost Cause school tenet which celebrated the valor, patriotism, and sacrifices of the Southern soldier soon accepted white Northern soldiers as part of that cohort. Shared memories of these soldiers helped to paper over hatreds engendered during the war except for some who still carried memories of prisoner of war experiences. But despite these, most veterans came to share the common experiences of war and their reconciliation helped the sections to join in mutually forgetting the horrors of war and in the celebration of the soldiers? valor. The famous 1913 Gettysburg reunion of veterans from both sides epitomized this spirit. In this spirit of forgetting and of a new nationalism, the ?Race Problem? was shunted aside as too divisive and difficult to resolve. Too, the majority of whites saw no evils in resubjugation of blacks believing that emancipation was sufficient by itself. The ?Separate but equal? doctrine promulgated by the U.S. Supreme Court its 1896 Plessy v. Ferguson decision was acceptable to whites. Certainly white society did not want blacks as social equals.

Race and Reunion is an extraordinarily valuable book. Despite some unnecessary repetitions of its theme perhaps due to the book?s somewhat non-sequential structure, its lucid depiction of how the South?s view of the Civil War overcame emancipationist?s efforts is clearly shown by his use of a plethora of sources. Especially important is his effective use of black citizens including authors, speakers, clergy, veterans, former slaves, and college professors, to portray black majority and minority views. Despite efforts of writers like W. E. B. Du Bois, blacks lost most of the benefits of emancipation but more importantly, the Southern views of the war persisted long after 1915 as the established American memory. Not until the Civil Rights Movement in the 1960?s was the South?s victory in establishing its memory of the Civil War as the ?correct? American history overcome.