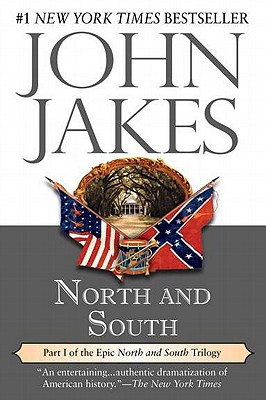 All Editions of North and South

The Winds of War

Gone with the wind

if you want to know about slavery, ask a slave.

First, this is an interesting story about two young men who go to West Point in the 1840's; one from the north (George Hazard) and one from the south (Orry Main)These two become the best of friends--more like brothers. They survive four years at the academy, and then go to war against Mexico where Main loses an arm. They both come from wealthy families, and we see the lives of Northerners and Southerners through their eyes. We see them get married and start raising families. We see them have family quarrels over slavery. Second, we get to see painstaking research into the feelings and causes that brought American men to the battlefield to fight American men. Third, we get a ringside seat as to the politics and politicians of the era. The book was overwhelming when I first say it (two inches thick), but the story in the book is even more overwhelming. Read it and see if you don't agree.

This what I came to expect from an epic. The book defines historical facts with pure authenticity and clarity. Learning your past is what shapes your future! John Jakes to me
is alone on the pedestal. He has no rival...period