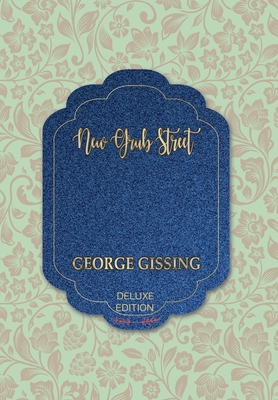 George Gissing's best-known novel shows us the literary underbelly of Victorian England, and the writers striving to forge their reputations in 'the street of no shame'. 'As a study in the pathology of the literary life it is unequalled, and still surprisingly relevant' David Lodge, Independent Grub Street - where would-be writers aim high, publishers plumb ... Read More

George Gissing's best-known novel shows us the literary underbelly of Victorian England, and the writers striving to forge their reputations in 'the street of no shame'. 'As a study in the pathology of the literary life it is unequalled, and still surprisingly relevant' David Lodge, Independent Grub Street - where would-be writers aim high, publishers plumb the depths and literature is a trade, never a calling. In a literary world disfigured by greed and explotation, two very different writers rise and fall: Edward Reardon, a novelist whose high standards prevent him from pandering to the common taste, and Jasper Milvain, who possesses no such scruples. Gissing's dark and darkly funny novel presents a little-seen but richly absorbing slice of nineteeth-century society. WITH AN INTRODUCTION BY ANTHONY QUINN Read Less

All Editions of New Grub Street

The Portrait of a Lady

I have been a reader of the late Victorian novelist George Gissing (1857 -- 1903) for most of my life and have read or reread much of his writing and reviewed it online. Gissing remains too little known and I focused in my reading and online reviewing on some of his less familiar works which tend to go in and out of print. Unlike most of his books, Gissing's novel "New Grub Street" (1891) has achieved recognition and readership. The book has remained in print, is frequently read and taught, and has garnered perceptive and appreciative reviews from online readers. After a long absence I wanted to revisit New Grub Street through Gissing's book.

Grub Street was the center of literary activity and publishing in London. Set in the late 18880's London, Gissing's book offers a sad, pessimistic depiction of literary life in an age of commercialization. The book depicts the heavy competition among writers for publication, recognition, and financial reward and the attendant difficulty of finding and maintaining a sense of individual integrity.

Virtually all of the novel's large group of characters are involved in the literary life. The book focuses on struggling young writers usually described as Bohemian. It also enters into the world of scholarly writing, into book editing and publishing, and, a subject important to serious online reviewers, book reviewing. The book explores how with the rise of at least partial literacy in a large population and the perceived attractions of the literary life, writing frequently involved harshness and drudgery and led to poverty. Early in the novel, Gissing describes those who survive by writing and who sit for hours in the British Museum as living in the "valley of the shadow of books." Writing and poverty are at the center of this novel together with the effect of writing on the search for love, intimacy, and sexuality.

The primary character, Edward Reardon, is a young novelist whose early writings achieved a degree of success. Reardon has married the lovely, accomplished Amy Yule who wants a materially comfortable life which she believes her husband can provide through his writings. Reardon, however, is in the midst of a writer's block and cannot produce anything up to his own standards. His efforts in the area of popular writing prove unsuccessful as he and Amy quarrel, drift into poverty, and ultimately separate.

Reardon's story is juxtaposed to that of his contemporary and acquaintance, Jasper Milvain who likewise is trying to rise from a modest background. Although lacking novelistic talent, Milvain is a young man on the make through networking, writing essays and review, and trying to cater to the public taste. Milvain also seeks a financially advantageous marriage and has few scruples about how he obtains it.

A third writer, Alfred Yule, is an aging scholar with large, thwarted ambitions who spends his days in the British Museum and who ekes out a modest living writing articles assisted by his daughter Marian. With the pressures of sexuality and the need for love, Yule married early in life, taking a wife from a poor, uneducated family. The marriage proves unhappy to all concerned.

Besides these three characters and their love interests, the book develops some fascinating secondary characters. The most memorable of these is Biffen who lives in abject poverty and who is writing a long, "realist" novel called "Mr. Bailey, Grocer" focusing on the every day, undramatic life of those whom Biffen calls the "ignobly decent". Biffen proves a true friend to Reardon. A character named Whelpdale is a failed novelist and a mostly failed suitor, but he develops an eye for low literary taste and for the reading needs of those who ride buses and subways. He becomes the successful publisher of a gossipy tabloid.

Many readers find "New Grub Street" glum indeed. Most fundamentally, the book questions the value of having so many people with substantial gifts and educations struggling to succeed in the overcrowded field of writing when they might make more modest rewarding choices for themselves which would offer the chance of love and sexual fulfillment. Then too, Gissing criticizes shallow, commercial writing aimed largely at turning a profit. Although Gissing portrays the weaknesses of characters such as Reardon and Biffen, he believes writing must aim at value and meaning separate from the marketplace. His icons are the writers of Greece and Rome. This is a difficult belief to maintain because of the education and agnosticism of the characters in this book and the denial of any values beyond those of immanence.

"New Grub Street" is written in the third person in a narrative voice that tells the reader virtually everything about its characters. Critics have often found that Gissing talks too much about his characters rather than showing them in action. This criticism is overdone, I believe, but the author still has a heavy editorial voice which sometimes reaches out in apostrophes to the reader. The book also includes a great deal of dialogue. In places in the novel, Gissing satirizes his own writing style. Although heavy in places, the writing in "New Grub Street" effectively matches its story. It is in shades of gray and of London fog. Each of the primary characters, male and female, are well and individually developed, showing both their strengths and their inevitable human failings.

At one point in the book, Biffen is accompanying Reardon as Reardon responds to an urgent call from his estranged wife. Biffen points out to his friend the folly and obstinacy of his way of life and the need to compromise. He says:

"[W]e both of us have too little practicality. The art of living is the art of compromise. We have no right to foster sensibilities, and conduct ourselves as if the world allowed of ideal relations; it leads to misery for others as well as ourselves. Genial coarseness is what it behoves men like you and me to cultivate."

Gissing put a great deal of himself into "New Grub Street" as he describes the dilemmas he faced as a writer. Reardon is an autobiographical figure but there is much of Gissing as well in Biffen, Whelpdale and in Jasper Milvain. Readers new to Gissing will not need to worry about these autobiographical references. The book also describes well the London of the late 19th Century and the nature in particular, of literary London.

I was glad to revisit New Grub Street and an author I have loved for a long time. "New Grub Street" remains the book of Gissing that will be of interest to the reader seeking to know his work.