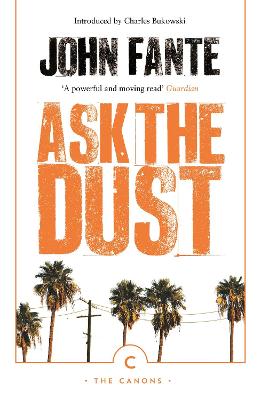 Arturo Bandini is a twenty-year-old burgeoning writer, spending his days hungry for success, life and food in a dingy hotel in Los Angeles. Full of the enthusiasm of youth, and the thrill of having one short story published, the reality of poverty and prejudice has hit him hard. He meets a local waitress, Camilla Lopez, and embarks on a strange and strained love-hate relationship. Slowly, but inexorably, it descends into the realms of madness. Fante depicts the highs and lows of the emotional state of Bandini with ... Read More

Arturo Bandini is a twenty-year-old burgeoning writer, spending his days hungry for success, life and food in a dingy hotel in Los Angeles. Full of the enthusiasm of youth, and the thrill of having one short story published, the reality of poverty and prejudice has hit him hard. He meets a local waitress, Camilla Lopez, and embarks on a strange and strained love-hate relationship. Slowly, but inexorably, it descends into the realms of madness. Fante depicts the highs and lows of the emotional state of Bandini with conviction, but without easy sentiment. In Ask the Dust, Fante is truly 'telling it like it is' as a poverty-stricken son of an immigrant in 'perfect' California. Read Less

All Editions of Ask the Dust

The Wine of Youth

The Road to Los Angeles

The Road to Los Angeles

John Fante's short novel,"Ask the Dust"(1939) is set in the Depression-ridden Los Angeles of the 1930s. It is a semi-autobiographical novel which tells the story of Arturo Bandini, an inexperienced 20-year old who aspires to be a writer. Bandini, the son of Italian immigrants, has left his home in Boulder, Colorado to pursue his dreams of writing in a shabby area of Los Angeles. When the novel begins, Bandini has had one story accepted for publication the "Little Dog Laughed" of which he is inordinately proud. Dogs come to play a large role in the book even though they have no role in Bandini's first story. Bandini's editor, Hackmuth, is based upon the figure of H.L. Menken, and he offers Bandini great encouragement in his literary efforts.

Upon moving to Los Angeles, Bandini moves into a cheap, dilapidated hotel, the Alta Loma, in an area known as Bunker Hill. He struggles with writing, poverty, loneliness, sexual hunger, and with understanding his Catholicism. As the novel opens, Bandini is running out of money, owes back rent, and faces a writer's block. Bandini is also seeking, unsuccessfully, sexual experience with women.

The book revolves around the relationship between Bandini and a young Mexican waitress named Camilla Lopez who works at an establishment called the Columbia Buffet. Lopez and Bandini are deeply attracted to each other yet their relationship explodes with hostility. The story explores the racial prejudices of both Bandini, with his reaction to Mexican-Americans and Camilla, with her envy and her own prejudice against children of immigrants. Camilla is in love with Sammy, a bartender at the Columbia Buffet. Sammy becomes terminally ill and still rejects Camilla. Camilla is addicted to drugs and suffers a severe emotional breakdown. Fante tells a story of love, frustration, rejection and sexuality. The story is bleak and sad as Camilla wanders into the desert alone with her dog and Bandini, heartbroken, becomes disillusioned with writing.

In the course of the story, Bandini meets and has a short affair with an older woman, Vera Rivken, who suffers from a terrible disfigurement. Bandini is able to move from the affair to write his first novel based upon his imagination of Vera's life.

This book is, for the most part, tautly and sparely written. On occasion, Fante adopts a lyrical, highly expressive and poetic tone. The book portrays beautifully the streets, cheap rooming houses, and dives of the poorer sections of Los Angeles. The secondary characters in the story, including the grasping landlady, Mrs Hargraves, Bandini's cadging alcoholic friend Hellfrink, and several prostitutes and dancing girls as well as its settings give the book a gritty feel of immediacy. An earthquake plays a pivotal role in the book. Bandini is an egotistical, naive young man and yet the reader becomes involved with him, as well as with Camilla, Sammy, and Vera. It is easy to understand why the underground novelist and poet Charles Bukowski together with many other writers was influenced greatly by this still comparatively little-known work.

Bandini's writing begins to succeed when he lets himself go and stops becoming stressed over attempts to forge a literary style over his typewriter. Thus Bandini's second story is in effect a long letter to Hackmuth which the editor turns into a publishable work by removing the greeting and salutation. In his reaction to the affair with Vera, Bandini quickly writes his first novel. In a mixture of egoism and insight, Bandini describes what he deems valuable in writing: "It won't shake the world, it won't kill a soul, it won't fire a gun, ah, but you'll remember it to the day you die, you'll lie there breathing your last, and you'll smile as you remember the book. The story of Very Rivken, a slice out of life." (p.146)

In 2006, a movie of "Ask the Dust" was released which was adequate at best and does not do justice to Fante's novel. This short, multi-themed book of tough urban life deserves to be read. "Ask the Dust" is a minor American classic.

I found this book to be captivating, especially with some background in LA. It hits true to several of the elements that have changed, for the most part, over time (sexism, racism, etc) but seemingly with less of a "shock value" and more of a picture into the character and setting. It's a little gritty and rough but not overly so and like all time honored novels still holds true to many things that are still relevant today. Arturo is an odd character and the entire plot is appreciated for it's lack of formula. I found it an entertaining read that follows the general typology of "Catcher in the Rye" but written 12 years earlier and, in my opinion, is much better of a story. Why does Salinger get all the credit and Fante remains an unknown figure to most?