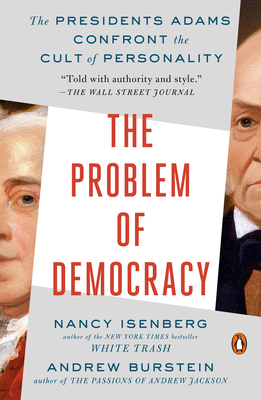 The Problem of Democracy: The Presidents Adams Confront the Cult of Personality

"How the father and son presidents foresaw the rise of the cult of personality and fought those who sought to abuse the weaknesses inherent in our democracy. Until now, no one has properly dissected the intertwined lives of the second and sixth (father and son) presidents. John and John Quincy Adams were brilliant, prickly politicians and arguably the most independently minded among leaders of the founding generation. Distrustful of blind allegiance to a political party, they brought a healthy skepticism of a brand-new ... Read More

"How the father and son presidents foresaw the rise of the cult of personality and fought those who sought to abuse the weaknesses inherent in our democracy. Until now, no one has properly dissected the intertwined lives of the second and sixth (father and son) presidents. John and John Quincy Adams were brilliant, prickly politicians and arguably the most independently minded among leaders of the founding generation. Distrustful of blind allegiance to a political party, they brought a healthy skepticism of a brand-new system of government to the country's first 50 years. They were unpopular for their fears of the potential for demagoguery lurking in democracy, and--in a twist that predicted the turn of twenty-first century politics--they warned against, but were unable to stop, the seductive appeal of political celebrities Thomas Jefferson and Andrew Jackson. In a bold recasting of the Adamses' historical roles, The Problem of Democracy is a major critique of the ways in which their prophetic warnings have been systematically ignored over the centuries. It's also an intimate family drama that brings out the torment and personal hurt caused by the gritty conduct of early American politics. Burstein and Isenberg make sense of the presidents' somewhat iconoclastic, highly creative engagement with America's political and social realities. By taking the temperature of American democracy, from its heated origins through multiple upheavals, the authors reveal the dangers and weaknesses that have been present since the beginning. They provide a clear-eyed look at a decoy democracy that masks the reality of elite rule while remaining open, since the days of George Washington, to a very undemocratic result in the formation of a cult surrounding the person of an elected leader"-- Read Less

All Editions of The Problem of Democracy: The Presidents Adams Confront the Cult of Personality

White Trash: The 400-Year Untold History of Class in America

The Soul of America: The Battle for Our Better Angels

Enemies: A History of the FBI

Eisenhower in War and Peace

The Ascent of George Washington: The Hidden Political Genius of an American Icon

The True Complexity Of the Past Revisited

In 2010, the historians Nancy Isenberg and Andrew Burstein wrote a lengthy dual biography, "Madison and Jefferson" which they dedicated to those who appreciate "the true complexity of the past". The book emphasized the difficult character of historical study and warned its readers against the too-ready acceptance of commonplaces and myths. In their new book, "The Problem of Democracy: The Presidents Adams Confront the Cult of Personality" (2019) the authors describe their study of Madison and Jefferson as dispelling "the long held illusion that James Madison was Thomas Jefferson's dutiful political lieutenant". They argue many historians have ignored their coequal relationship, overlooked Madison's partisanship, undervalued his presidency, and overstated his role at the Constitutional Convention.

The goal of Isenberg's and Burnstein's new book is to show that many students misunderstand the second and sixth presidents, John Adams (JA) and his son John Quincy Adams (JQA), more egregiously than, the authors insist, they misunderstand the relationship between Madison and Jefferson. The authors write in explaining the purpose of their study of the two Adams presidents.

"Father and son are seen as obstructionists, stuffed shirts, surly malcontents, who were resistant to the supposed good intentions embedded in Jeffersonian and Jacksonian democracy. Instead of viewing them as contrarians, we should know them as serious students of a road not taken, two who insisted that competence and rational judgment should supersede hollow celebrity and contrived popularity in a republic where voices ought always to register the choices of an informed citizenry."

The authors discuss the lives and lengthy political careers of both JA and JQA, their closely intertwined lives, and their father-son relationship. Commendably, the see the Adamses important less for their tangible accomplishments, important as they are, than for their writings and philosophy. Isenberg and Burstein write: "The best reasons we find for remembering the Adamses are those that concern their stubborn insights into human psychology. They understood the tricky relationship between human nature and political democracy, and how emotionally induced thought often undermined social and political justice." The skepticism, intellectual toughness, and realization of human weakness that the Adamses displayed is an important counterbalance to the story of American exceptionalism and to the easy view of a straight-line advance of democracy. The authors find the Adamses offer compelling insights in understanding "how the United States could have proceeded from its ecstatic opening pledge -- the magnaminous 'spirit of 1776' -- to where it is today as a distressed political system."

The book praises the Adamses love of learning and lifelong devotion to study. It seems them as offering a strong critique of the party system which began early in the presidency of George Washington and which led, in the authors' words to "tribalism". The Adams, father and son, were a "party of two". The authors summarize the fundamental commitments of JA and JQA in two succinct phrases: "independence" and "service to country".

As is its predecessor, "The Problem of Democracy" is a lengthy, sprawling book which aims to combine history, political philosophy, and biography and includes as well a degree of polemic. I have used the introduction to the book "Mythic Democracy" in framing its themes and might have used for this purpose the concluding section as well. The body of the book, however, is divided into two parts, "Progenitor" and "Inheritor", which constitute a more traditional dual biography of JA and JQA. It begins with JA's early life and legal career, his marriage to Abigail Smith, and his role in early revolutionary activity. It covers JA's long years abroad during the Revolutionary War and his relationship with his brilliant, intellectually-driven son. As JQA matured, he and his father began to relate to each other as colleagues and friends as well as father and son. The book explores JA's eight year vice-presidency and four year presidency while threading in JQA's activities during these years as a diplomat, Senator, and political thinker. With JA's defeat in his bid for a second term, the book show the rise of JQA in his role of Secretary of State and one-term president. After JQA lost his bid for a second term, he served as a Congressman for 17 years and attained renown for his independent opposition to slavery and to the "gag" rule.

At times, the thread of the book is hidden in the long biographical discussions. The book has the strength in showing the long relationship between Adams father and son, how the two were alike and how they differed. The most valuable parts of the dual biography discuss JA's and JQA'a lifelong devotion to learning. Both men were lifelong readers, diarists, and writers. They each learned from classical writers and from the Roman writer Cicero in particular. The authors offer an inspiring guide to the reading of JA and JQA. They also discuss in considerable detail the writings of the Adams father and son. Again, their writings are frequently passed over too quickly in more popular biographies. The book discusses in good detail JA's "Thoughts on Government", his three-volume "Defense of the Constitutions of the United States" and his "Lectures on Davila". JQA's writings receive equal attention, including his Diary, the "Publicola" lectures, his poetry, his Inaugural Address, and his study of the social compact late in life. Reading, writing, and thought are at the heart of this book and of the Adamses philosophy of government. They show how the Adamses critiqued individualism, charisma, the cult of personality, and over-reliance on the party system in their own day. The thought and career of the Adams counsels against a too-facile, superficial understanding of democracy, as developed by the authors.

I have long admired JA and JQA, and I learned a good deal from this book. The authors, perhaps, overstate their own originality, as there are other outstanding recent biographies and studies of the thought of both men. Readers inspired by this book to learn more may wish to explore the several volumes of original writings of JA, JQA, and Abigail Adams available from the Library of America.

The tone of "The Problem of Democracy" is sometimes overbearing, both as regards current affairs and the Adamses contemporaries. Figures such as Jefferson and Jackson should not be viewed as merely the product of the cult of personality or of a tribal two-party system. They too have their own strengths and their strong teachings and influence. as do John Adams and John Quincy Adams. There are many strands in American thought and life and it is important to try to recognize and weigh them on their merits and not simply to substitute one set of heroic figures for another. It is in this way that we will approach the goal of Isenberg and Burstein in understanding and appreciating both our country and its history and also the "true complexity of the past".