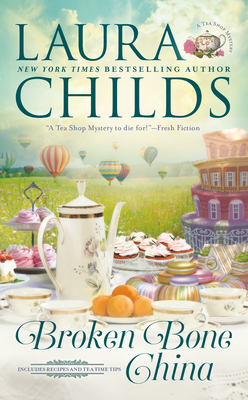 All Editions of Broken Bone China

The story opens with Theodosia and Drayton high in the air in a hot-air balloon. They were catering the rally and were gifted to fly in the air themselves. While enjoying the spectacular views and the other balloons the clouds start to roll in and Theo noticed a buzzing and then a strange object flying between the balloons. She soon realizes it is a drone. She doesn't really get excited at first thinking it is carrying a camera taking pictures of the event. But then the drone crashes into the balloon right next to them. There is a huge explosion and as the rain starts to fall and so does the fiery balloon, crashing to the ground killing the three souls aboard.

Theo and Drayton's balloon makes a hasty descent followed by a bumpy landing. Theo saw the whole thing and reports the drone's deliberate attack. It is then she learns one of the people killed was Don Kingsley, the CEO of a local software company, SyncSoft. It later comes out that Kingsley is the owner of a rare Revolutionary War Union Jack flag that was recently part of a bidding war and is now missing. He was also in the process of divorcing his wife who had been spending tons of money to renovate a mansion to open it as a B&B.

After witnessing such a tragic event, Theodosia is driven to distraction. Even though she is warned to leave the case to the police she just can't stop herself from investigating the deaths herself, pulling Drayton along with her. It doesn't help that the prime suspect is the fiancée of one of her friends and the evidence is piling up.

Wow, this is the 20th Tea Shop Mystery and the author always delivers a fresh and exciting mystery. I mean a drone taking down a hot air balloon, that catches a reader's attention and the investigation keeps it until the last page.

What makes these stories great is the wonderful cast of characters and the Indigo Tea Shop where everyone seems to gather to pick up their morning tea and scones, or stop by for a lunch of soup and sandwiches or the fantastic tea events that are held there several times a week. The Nancy Drew Tea is one I wish I had been able to attend. While Theo and Drayton venture out to sleuth, most of the key figures find their way to the tea shop eventually and some are there numerous times. Ms. Childs' descriptive talents really bring time, place, and people to life.

I found the historical information about the Union Jack flag was very interesting. It was a unique element playing a big part in a mystery that was full of twists and turns. Theodosia has built a reputation for solving crimes before the police so expectations are always high and she doesn't let us down.

The author plots her stories so well and truly fills them with Southern charm. They are perfectly paced and flow so well they are almost impossible to put down. I read this one incredibly fast and totally enjoyed every page.

Broken Bone China is a delightful addition to this long-running series. If you're not already of fan of this series the author always provides plenty of background so you can jump in the series at any time. Of course, I recommend you read them all ??