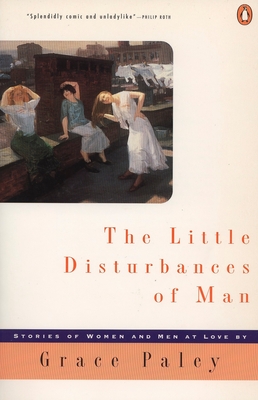 The Little Disturbances of Man

This collection includes stories about men and women in the thick of life and the tumultuous relationships they share. Anything can, and does, happen to the loving couples, bickering couples, deserted wives and discarded husbands. Read More

This collection includes stories about men and women in the thick of life and the tumultuous relationships they share. Anything can, and does, happen to the loving couples, bickering couples, deserted wives and discarded husbands. Read Less

All Editions of The Little Disturbances of Man

Just as I Thought

A Regular College of Feelings

Grace Paley's voice is inimitable--hilarious, wise, wisecracking, colloquial, and casually bawdy. And voice is the key to The Little Disturbances of Man, her first collection of stories published in 1959. The ten stories compress whole lives as novels do, and her delicious sentences need to be savored slowly. Rich with Yiddish expressions and syntax, the voice is often New Yorkish, but Paley is no more a regionalist writer than was Hawthorne or Faulkner or Morrison.

The narrator of "Goodbye and Good Luck" is Aunt Rose, who talks story to her niece. She rejects her sister's pity: "Poor Rosie! If there was more life in my little sister, she would know my heart is a regular college of feelings and there is such information between my corset and me that her whole married life is a kindergarten." At the Russian Art Theater on the Lower East Side, which stages Yiddish plays, she meets Volodya Vlashkin, the "Valentino of Second Avenue." In the process, Paley evokes a lost world. Vlashkin helps Rose find a room near the theater, and she "decides to live for love." But the famous actor is "like a diamond"; he has many faces--and lovers. Later, Rose observes in her aging mother's face "the rotten handwriting of time." After the theater closes, she discovers late in life the fulfillment that should come "before the end of the story."

The comedy of tradition and assimilation is mined in "The Loudest Voice" in which Shirley Abramowitz participates in the school Christmas play, while her parents are aghast and ambivalent about this "holiday from pagan times." In "The Contest," Dorothy incites her boyfriend Freddy to identify the "Jews in the News" in a Yiddish vernacular, hoping to "direct" his energies, but this story exposes as well the male narrator's hapless self-delusions.

In "An Interest in Life," after her husband joins the army, Viriginia, a single mother, takes up with a neighbor John Raftery, but in the end--and likely for the worst--the momentary happiness of desire trumps all. These stories are imbued with a funny, sexy, and bitter knowledge as in the closings of "An Interest in Life" and "An Irrevocable Diameter," and also in Rose's unvarnished prediction to her niece in "Goodbye and Good Luck": "Honey, you will no doubt love and marry one man and have a couple of kids and be happy forever till you die tired." This is a laughter of a sort so true that it hurts.

As its title suggests, "In Time Which Made a Monkey of Us All" is the most outlandish and stylistically outrageous of the entire collection. These are the opening sentences: "No doubt that is Eddie Teitelbaum on the topmost step of 1434, a dark-jawed, bossy youth in need of repair. He is dredging a cavity with a Fudgsicle stick. He is twitching the cotton in his ear. He is sniffing and snarling and swallowing spit because of rotten drainage. But he does not give a damn." Eddie is the neighborhood inventor who builds first a "cockroach segregrator," then, more ambitiously, a non-toxic "War Attenuator," shares a room with Itzik Halbfunt, his father's monkey, and works at the Teitelbaum Zoo, a pet shop, where his father sorrowfully passes his day. Paley, a lifelong pacifist and feminist, does not skew her stories toward ideology. Like most utopian schemes, Eddie's end badly too.

Paley's oeuvre is slight. The Collected Stories were published by Farrar Straus Giroux in 1994 and comprise this collection and two later volumes, Enormous Changes at the Last Minute (1974) and Later the Same Day (1985). The author devoted much time to family and the battlements of peace. To my heart and mind, Grace Paley's stories are a national treasure.