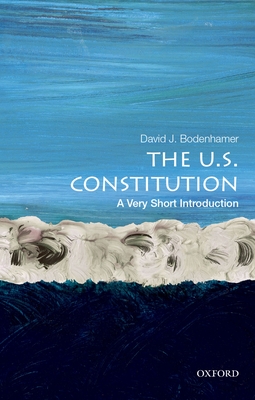 "Though the U.S. Constitution was ratified in 1788, its impact on our lives is as recent as today's news. Claims and counterclaims about the constitutionality of governmental actions are a habit of American politics. This document, which its framers designed to limit power, often has made political conflict inevitable. It also has accommodated and legitimized the political and social changes of a vibrant, powerful democratic nation. A product of history's first modern revolution, the Constitution embraced a new formula for ... Read More

"Though the U.S. Constitution was ratified in 1788, its impact on our lives is as recent as today's news. Claims and counterclaims about the constitutionality of governmental actions are a habit of American politics. This document, which its framers designed to limit power, often has made political conflict inevitable. It also has accommodated and legitimized the political and social changes of a vibrant, powerful democratic nation. A product of history's first modern revolution, the Constitution embraced a new formula for government: it restrained power on behalf of liberty, but it also granted power to promote and protect liberty. The U.S. Constitution: A Very Short Introduction explores the major themes that have shaped American constitutional history: federalism, the balance of powers, property, representation, equality, rights, and security. Informed by the latest scholarship, this book places constitutional history within the context of American political and social history. As our nation's circumstances have changed, so has our Constitution. Today we face serious challenges to the nation's constitutional legacy. Endless wars, a sharply divided electorate, economic inequality, and immigration, along with a host of other issues, have placed demands on government and on society that test our constitutional values. Understanding how the Constitution has evolved will help us adapt its principles to the challenges of our age"--Provided by publisher. Read Less

The Encyclopedia of Indianapolis

The Spatial Humanities: GIS and the Future of Humanities Scholarship

The Bill of Rights in Modern America: Revised and Expanded

Fair Trial: Rights of the Accused in American History

A Brief Overview Of The Constitution

Reflection on the United States Constitution is always rewarding particularly in tumultuous times. David Bodenhamer's recent book, "The U.S. Constitution" in Oxford University Press' "Very Short Introductions" series offers a brief good overview of the Constitution and its significance. The director of the Polis Center at Indiana University and a professor of history, Bodenhamer has written extensively on American constitutional and legal history.

This "very short introduction" covers a great deal of difficult material, both in terms of time and substance. As a unifying theme, Bodenhamer shows the tension in the Constitution and its interpretation between the protection of individual liberty on the one hand and the need for a strong government to protect liberty and to respond to a changing world on the other hand. Thus, Bodenhamer offers a whirlwind discussion of the events which led to the Constitutional Convention, to the compromises and divisions of power in the text of the original document, to the ratification convention, and the adoption of the Bill of Rights. It would be a great deal to cover even for a work many times longer than this book, and Bodenhamer's chapter is the least satisfactory part of this very short introduction.

Then again, Bodenheim devotes a chapter to Federalism and the divided government the Constitution created between the Federal and the State governments. He shows how this division has been constantly reinterpreted and readjusted during American history with a stress on the importance of the Civil War Amendments. The following chapter of the book addresses another broad structural issue in the Constitution by exploring the balance and separation of powers among the legislative, executive, and judicial branches and how each branch has tended to vie for power and predominance over time.

After these brief discussions of the structure of the Constitution, Bodenheimer explores critical substantive areas in the document and in its interpretation, including property, voting, equality, the nature and content of various rights, such as the right to free exercise of religion, and national security. In each of these areas, Bodenheimer discusses some of the key Supreme Court cases over the years that have shaped the law together with discussions of executive and legislative actions and changes in the views of the people. On the whole the discussions are good and accessible (with the omission of a critical "not" in the discussion of a case on government action and its relationship to the Establishment Clause, p. 105). The reader gets a sense of the complexity of the issues and of differences in approach to them. Bodenhamer is generally even-handed rather than polemical or ideologically driven.

There is much to be learned about the Constitution and this very short introduction barely skims the surface. Still, the book works as an introduction both to new readers and to readers seeking an overview. The book includes suggestions for further reading for those moved to explore some of the issues in American constitutionalism. Importantly, Bodenhamer treats the Constitution and the United States with respect. He reminds readers of Benjamin Franklin's response as he left Independence Hall to a woman who asked about what kind of government the Constitution had created. "A Republic, if you can keep it", Franklin replied. As Bodenheimer concludes, "how Americans interpret the Constitution during unsettled and troubled times makes Franklin's challenge the most important one that the United States as a nation will ever face." Within the scope of a very short introduction, this book is a good brief study of the Constitution that may inspire readers to learn more.