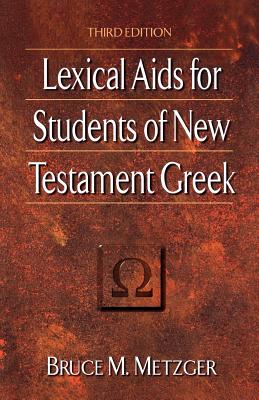 A standard Greek reference tool allowing students to learn vocabulary quickly by listing words according to their frequency of use in the New Testament. Read More

A standard Greek reference tool allowing students to learn vocabulary quickly by listing words according to their frequency of use in the New Testament. Read Less

All Editions of Lexical AIDS for Students of New Testament Greek

The text of the New Testament; its transmission, corruption, and restoration

Breaking the Code with Leaders Guide

This book is yseful as it allows the person to learn words by ways of their frequencies in the Bible. It is very easy to read and understand

A Must Have for Any Serious New Testament Student

I have used this book (the original . . . not the updated version) for the past 2-3 years, so much that the cover is now stuck on with tape. Admittedly, I have only used it for the vocabulary lists that can be found towards the front of the book, but even these make the book worth the prices being asked here. Like I said above, this really is a must have for a New Testament Greek Student.

Metzger is a Must!

I have used Metzger?s Lexical Aids since shortly after the third edition appeared in 1969, and have given copies to friends and seminarians. It is useful for non-specialists in the language wishing to prioritize their study time. Perennial favorites are the lists: of words according to frequency, of words according to Greek root, of prepositions used as verbal prefixes, and of the principal parts of selected verbs. The index of words cited becomes more valuable as one uses the work.
This is a lexical (vocabulary) aid, and not a substitute for a foundational textbook in the elements of the language. Those who need to do so should use this with good charts of the Greek grammar close at hand.
Metzger?s work can be used profitably with Kubo?s verse-by-verse Reader?s Greek-English Lexicon of the New Testament, and as preparation for a work such as Trenchard?s Complete Vocabulary Guide to the Greek New Testament.
At the alibris.com price, even the church mice can afford Metzger?s work!