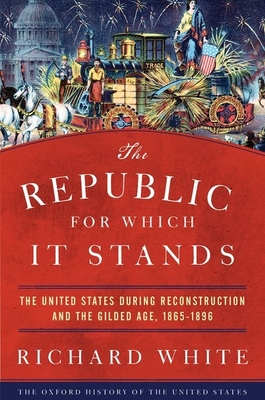 An "account of the Gilded Age's real legacy that lies buried beneath its capitalists of legend and its corrupt politicians"--Provided by publisher. Read More

An "account of the Gilded Age's real legacy that lies buried beneath its capitalists of legend and its corrupt politicians"--Provided by publisher. Read Less

All Editions of The Republic for Which It Stands: The United States During Reconstruction and the Gilded Age, 1865-1896

The Middle Ground: Indians, Empires, and Republics in the Great Lakes Region, 1650-1815

The Organic Machine: The Remaking of the Columbia River

It's Your Misfortune and None of My Own: A New History of the American West

The Native Americans: An Illustrated History

Railroaded: The Transcontinentals and the Making of Modern America

From Colony to Superpower: U.S. Foreign Relations Since 1776

Reconstruction And The Gilded Age

The Oxford History of the United States is a multivolume history of the American nation each of which is written by an acclaimed scholar. Each volume aims to present a thorough, comprehensive, contemporary view of its subject which is accessible to both scholars and lay readers. Founded by C. Vann Woodward and Richard Hofstadter and now under the direction of David Kennedy, the series, as the publisher's blurb aptly points out "blends social, political, economic, cultural, diplomatic, and military history into coherent and vividly written narrative."

The tenth and most recent volume in the series, "The Republic for which It Stands: The United States During Reconstruction and the Gilded Age, 1865 -- 1896", in the words of David Kennedy, "meets -- indeed exceeds" the high standards of the series in bringing "the most comprehensive and current historical scholarship to experts as well as to the general reader." The author, Richard White, is Margaret Byrne Professor of American History at Stanford University and a renowned scholar of the American West. Among other books, White is the author of "Railroaded: The Transcontinentals and the Making of Modern America" (2012) which I have read and reviewed here. The West and the railroads play prominent roles, as they must, in this new broader-based book. White's 900-page study offers a comprehensive, informed, and personal history of the roughly 30 years of American history from the death of Lincoln in 1865 to the election of William McKinley to the presidency in 1896. In my review of "Railroaded". I noted the polemical character of some of White's views and what I saw as his tendency to engraft current values onto an earlier historical period. These traits, as well as the ever-present and over-worked irony of our generation, are apparent in this new study. The traits were most apparent to me in the earlier sections of the book. As the work went on, however, I became absorbed in the study, as White says he did himself as he immersed himself in his subject. Whatever presentism and irony I found in the initial approach became less intrusive as I became involved in the period and in White's history.

"The Republic for which it Stands" is a long book which fulfills the historian's mission of creating an intellectual reconstruction of the past. The book is as multi-themed and varied as the period which it studies. White's book is in three large parts. Part l, "Reconstructing the Nation" begins with the death of Lincoln, examines the Reconstruction policy of Andrew Johnson and of Congress, and explores the Southern reaction and the violence and the impact on the Freedpeople. The book examines Western expansion and Indian policy. There is also extensive discussion of economic and monetary policy and of ever-present corruption. Part I ends in 1876.

Part II, "The Quest for Prosperity" discusses a violent and divided America centered around the growth of large corporations. labor unrest, immigration, the suppression of African American voting, the conquest of the West, the ever-present corruption, and attempts at reform. The section describes in detail large scale strikes such as the Great Strike of 1877, the Homestead Steel Strike, and more. The Chicago international exposition of 1893 and its vision of progress is a centerpiece of this part.

Part III, "The Crisis Arrives" describes the increasing gap between the very wealthy and the very poor, and different utopian and dystopian visions of America. White describes the Great Depression of 1893, the Pullman Strike, the gold standard, and the failures of the second term of the Cleveland administration. (White is harsh on Grover Cleveland). The book shows the rise of William Jennings Bryan and the realignment of American politics with the election of McKinley.

The book covers a great deal, and in his Introduction and Conclusion, White works to pull his history together into a cohesive whole. Broadly, White sees a United States of double vision after the death of Lincoln. He argues that Lincoln, and his successors, saw the successor United States as based on the liberty of individuals to make contracts and to establish themselves economically and emotionally as independent, family units, rising as Lincoln did, from salaried employees to independence. White argues that this vision saw Americans as possessing essentially homogenous values best articulated in Protestantism and in small-town life (such as Lincoln's Springfield, Illinois). White finds the centerpiece of this view in a vision of the American family and in what he sees as the gendered roles of husband and wife in the family. This liberal vision, which effectively combated slavery, monarchy, and established religion, came in conflict with the changes wrought by the Civil War, and by the rise of the railroads and other corporations aided by corruption and by government largesse. The dream of liberalism and independence came into conflict with wage slavery, boom and bust, and environmental degradation. White sees throughout the book the rise of the antimonopoly movement in its various and often conflicting forms as the major reform effort of the era.

Another way in White unites his themes is through the use of literary and intellectual figures of the day. White makes insightful and creative use of the works of Henry Adams, William and Henry James, Mark Twain and Hamlin Garland, among many others. But the figure who stands out in White's history is the novelist and journalist William Dean Howells. Howells' receives attention throughout this history as emblematic of the age and of its changes. Howells began as a young man writing a campaign biography of Lincoln. He was a relatively moderate Republican early on but gradually moved, under the influence of what he saw as the disparities of wealth, the influence of Tolstoy and other factors to different types of positions which he expressed in his novels such as "The Rise of Silas Lapham", "A Hazard of New Fortunes" "A Traveler from Alturia" and in many essays and newspaper columns. Late in his life, in the 1890's, Howell's wrote, examining the period from Lincoln's death to the present, that "If American means anything at all, it means the sufficiency of the common, the insufficiency of the uncommon."

Howell's own intellectual journey, and his endorsement of "the sufficiency of the common" become themes of White's book as he argues for the importance of millions of men and women of modest means and attainments in the shaping of America in the late Nineteenth Century as opposed to the allegedly uncommon individuals such as financiers, corporate executives, inventors, and political leaders. White sees the period, and indeed the United States, as showing the rise of many diverse, unsung individuals rather than politicians, executives, or intellectuals.

The history of this period as recounted in White's book is messy and far from pretty or elevating. Yet underlying the book is a search for meaning in terms of both individual and national life resulting from a change in circumstances, economic and philosophical, and a search for new ideals. A sense of home and of love for the United States, which White says he "loves in his own perverse way" runs through the book. This book takes patience to read but it rewards the effort. An excellent bibliographical essay which discusses and comments upon many of the sources White used in writing the book shows the depth of writing about this period. White has written an outstanding book which helped me understand Reconstruction and the Gilded Age better and to think more deeply and carefully about American history.

I reviewed this book through the Amazon Vine Program