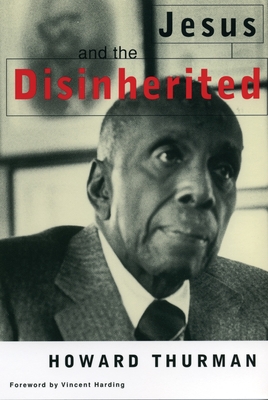 All Editions of Jesus and the Disinherited

A Black Theology of Liberation

Martin and Malcolm and America: A Dream or a Nightmare?

With Head and Heart: The Autobiography of Howard Thurman

Gary Dorrien's recent book, "Breaking White Supremacy: Martin Luther King, Jr. and the Black Social Gospel" provoked my interest in learning more about Howard Thurman (1899 -- 1981). Thurman was an African American minister, advocate for social justice, and mystic. He founded and led a racially-integrated non-denominational church in San Francisco and served as chaplain at both Howard University and Boston University. He traveled to India and was deeply influenced by Gandhi. The combination of mysticism, social activism, and ecumenicism that Dorrien described fascinated me to explore Thurman's writings for myself.

Published in 1949, "Jesus and the Disinherited" was Thurman's first book and his best-known. This short book constitutes an elaboration of lectures Thurman had given at the Samuel Huston College, Austin in 1948. It explores "the significance of the religion of Jesus to people who stand with their backs against the wall" and consists of five brief chapters titled "Jesus -- an Interpretation", "Fear", "Deception", "Hate" and "Love". Thurman's aim is to treat Jesus as subject rather than as object and to explore the nature of his life and teachings for themselves rather than the religion about Jesus developed by the churches. He thought through his understanding of Jesus during a trip to India when a Hindu sage challenged him to explain his devotion to Christianity in a country where African Americans were mistreated and marginalized.

I was struck by the deep influence of Judaism in Thurman's book. Thurman emphasizes Jesus' roots in the Jewish community of the day, born to a poor family. Thurman emphasizes as well the war between Judea and Rome which was ongoing during Jesus' life and which was central to Jesus' teachings. For Thurman, Jesus' initial mission was to teach his Jewish brethren the way to deal with Roman oppression without losing themselves. Thurman finds that Jesus response to oppression was the teaching that "the Kingdom of Heaven is within us". This is a mystical doctrine but did not teach passivity or acceptance of evil. Rather, Thurman finds that Jesus taught that the Kingdom was in this world rather than only in the next world and that persons had to live with dignity, courage, and love in this world in the face of oppression. Thus, for Thurman, Jesus taught a religion for the poor and the dispossessed rather than a religion to justify the powerful and the dominant that it too often became. Whenever Jesus' spirit appears, Thurman writes, "the oppressed gather fresh courage; for he announced the good news that fear, hypocrisy, and hatred, the three hounds of hell that track the trail of the disinherited, need have no dominion over them."

In the three middle chapters of the book, Thurman elaborates on the "three hounds of hell" by exploring the ramifications of fear, deception, and hate in the life of the oppressed and trying to find an answer in action based on human dignity and the spirit of God. In each chapter, I was again struck by the use made of Jewish themes and sources. He discusses the Biblical story of David and Goliath, the nature of anti-Semitism, the ghetto life to which both Jews and African Americans had been subjected, the Babylonian Captivity, and the words of the Psalms and the Prophets. Thurman also brings to bear his own personal experiences in support of his theme that all persons are children of God and part of a whole who are entitled to dignity and respect.

Thurman argues in the final chapter of the book that the love-ethic is central to the religion of Jesus, and he supports his position with a discussion of the Shema, the central prayer in Judaism which commands "thou shalt love the Lord thy God with all thy heart, with all thy soul, and with all thy might" and "thy neighbor as thyself". Thurman discusses how the love-ethic expands to include every person, including one's enemy. Thurman argues that the dispossessed of the world must use love to overcome fear, hypocrisy, and hatred. He writes that those with their backs to the wall "must recognize fear, deception, hatred, each for what it is." "In so great an undertaking, it will become increasingly clear that the contradictions of life are not ultimate. The disinherited will know for themselves that there is a Spirit at work in the life and in the hearts of men which is committed to overcoming the world. It is universal knowing no age, no race, no culture, and no condition of men. For the privileged and underprivileged alike, if the individual puts at the disposal of the Spirit the needful dedication and discipline, he can live effectively in the chaos of the present
the high destiny of a son of God."

Among many other things, I found in this book one of the more moving restatements of Jewish themes that I have read. The book manages to be both ecumenical and Christian, a rare accomplishment indeed. The book teaches the importance of ending oppression and hate in this world and thus is characteristic of what Dorrien terms the "Black Social Gospel". Together with that, however, there is a strong mystical, spiritual feeling in "Jesus and the Disinherited" that transcends politics or social activism. I was glad to get to know this book.

an excellent dissertation on the marginalized : the disinherited

This is not a new book but a classic that needs to be read, no, more like studied by any persons of dominant culture trying to work compassionately in any social justice setting. I am dominant culture and need to be educated. If you are the same, this book will help you a ton. Faith based people will undersand the reference points and be challenged in their in-depth study of the authors well written material.