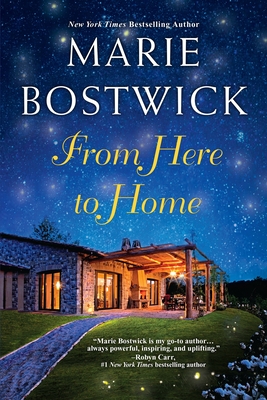 From Here to Home

"The quirky, unforgettable town of Too Much, Texas, is the setting for a heartwarming, richly satisfying story of friendship and moving forward as two women working for a cable TV show find an unlikely kinship"-- Read More

"The quirky, unforgettable town of Too Much, Texas, is the setting for a heartwarming, richly satisfying story of friendship and moving forward as two women working for a cable TV show find an unlikely kinship"-- Read Less

All Editions of From Here to Home

A Thread of Truth

Hope on the Inside

From Here to Home by Marie Bostwick is a Too Much, Texas Novel. Mary Dell Templeton currently lives in Dallas, Texas with her son, Howard where they do their television show Quintessential Quilting. The network, though, has decided to change things up (major changes going on at House and Home Network). They have decided to get rid of Howard and give Mary Dell a younger co-host (who knows nothing about quilting). Mary Dell is afraid that Howard will be upset, instead, Howard is thrilled. He wants a change and this is his opportunity. Howard wants to get his own apartment and take college classes. Mary Dell is happy for Howard, but she will also miss him. Then Mary Dell gets a call that things are not rosy at home in Too Much, Texas. Her niece, Cady has been taking care of things in Mary Dell's absence (the quilt shop, the F-Bar-T Ranch, her family, and Taffy). Taffy is eighty-five years old and has started acting a little loopy (and thinks she is twenty-five). Mary Dell's nephew, Rob Lee is also being sent back to Too Much. Rob Lee has had a difficult time since returning to the states from Afghanistan (drinking too much, anger issues). Mary Dell is hoping she can help him. Mary Dell convinces the network (well, the guy that is on his way out) to move the show to Too Much (and gets a signed contract).

Holly Silva (twenty-five) is up for the co-host job on Quintessential Quilting. The new executive is glad that she cannot quilt. He is hoping to tank to show (the only way out of the contract) and replace it with something he wants (which he will let Holly host). Holly is supposed to cooperate, but she does not think she can do that. Holly packs up and moves to Too Much where she is greeted warmly. Cady and friends find out that Holly cannot quilt, they start giving her lessons. They are going to help her succeed. Rob Lee and Holly have instant chemistry. But is Rob Lee ready to move on with his life. There is also romance in the air for Mary Dell. However, there is one little thing standing in the way of her happiness (and it is a goody). Can Mary Dell and Holly make a success of the show despite the new executive's attempt to tank it? Will Rob Lee change his ways? What happens when Mary Dell needs to find her long lost husband, Donny Bebee?

From Here to Home was just delightful. I enjoyed every moment of this novel. From Here to Home is a part of a series, but it can be a stand-alone novel (though you really should read the other books). From Here to Home has fun, quirky characters, a quaint small town, and engaging storyline. The ending is just wonderful (as well as delightful). I did not want this book to end. I give From Here to Home 5 out of 5 stars. Too Much, Texas series is a spin-off from the Cobbled Court Quilt series (good series but not as enjoyable as Too Much, Texas books). I have read the books from both series and enjoyed all of them. Mary Dell is a special lady, and I was glad to see her get the happiness she deserves in From Here to Home. If you are looking for a book that will make you laugh, cry, and sigh (when you finish it and close the book), then read From Here to Home.

I received a complimentary copy of From Here to Home from NetGalley in exchange for an honest evaluation of the novel.