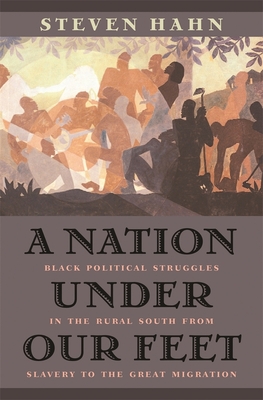 A Nation Under Our Feet: Black Political Struggles in the Rural South from Slavery to the Great Migration

Presenting both an inspiring and a troubling perspective on American democracy, this 2004 Pulitzer Prize winner is the epic story of how African Americans, in the six decades following slavery, transformed themselves to a political people--an embryonic black nation. Read More

Presenting both an inspiring and a troubling perspective on American democracy, this 2004 Pulitzer Prize winner is the epic story of how African Americans, in the six decades following slavery, transformed themselves to a political people--an embryonic black nation. Read Less

All Editions of A Nation Under Our Feet: Black Political Struggles in the Rural South from Slavery to the Great Migration

The Roots of Southern Populism: Yeoman Farmers and the Transformation of the Georgia Upcountry, 1850-1890

The Countryside in the Age of Capitalist Transformation: Essays in the Social History of Rural America

The Political Worlds of Slavery and Freedom

Roll, Jordan, Roll: The World the Slaves Made

Arc of Justice: A Saga of Race, Civil Rights, and Murder in the Jazz Age

The Strange Career of Jim Crow

How Southern Blacks Empowered Themselves

Steven Hahn's history "A Nation Under Our Feet" (2004) tells an inspiring and broad story: how rural Southern African Americans took steps towards political empowerment as a group beginning with the period of slavery and continuing through the Great Migration to the Northern states beginning early in the Twentieth Century. Hahn is a Professor of American History at the University of Pennsylvania, and his book received, and justly so, the Pulitzer Prize, the Bancroft Prize and the Merle Curti Prize in Social History.

The purpose of Professor Hahn's study is to show how African Americans from their earliest days in the South attempted to organize to take control of their own destiny. The book challenges the view of many historians that African American political activism was predominantly only a reaction to white oppression and to the unwillingness of Southern whites to have African Americans assume a full role in political life.

Professor Hahn's book is arranged chronologically in three broad Parts. Part I covers African American political activity during the pre-Civil War and Civil War period. He describes how blacks, even in the condition of slavery, used their position to wrest concessions from the slaveholders, including the right to farm their own plots, to make limited sales of produce, and to visit neighboring plantations. He describes the growth of an informational network during these years, an early commitment to education to literacy, and the beginnings of a political organization. These early efforts intensified during the Civil War with the advance of Union Armies in the South, the defection of many slaves, and the service of Southern African Americans in the Union Army.

The second part of the book covers the complexities of the Reconstruction period from the close of the War through about 1877. This is the heart of Hahn's account, and it has been influenced heavily by Eric Foner, W.E.B. DuBois, and John Hope Franklin. Professor Hahn shows the strong efforts of many African Americans throughout the South to take control of their destinies and to make active and responsible contributions to the body politic. During this period, African Americans had many leaders who had been slaves or free blacks prior to the War and who had acquired literacy and political ability. They achieved a degree of success for a time in different parts of the South but their efforts were doomed by Southern Paramilitary movements, such as the Ku Klux Klan, and by the unwillingness of the United States government to stand wholeheartedly behind black civil rights. Professor Hahn tells a chilling story of murder and political intimidation which, as did the efforts of the black leadership, had its roots in the years before the Civil War.

Part three of the book covers the years following the end of Reconstruction, a period which sometimes is greatly oversimplified. Even with the end of Reconstruction, African Americans made efforts to empower themselves by forging alliances with white groups. During the first decade or so following Reconstruction, Southern whites were sufficiently divided among themselves to allow African Americans a degree of political leverage and power. Also during these years, there was an active black emigrationist movement which encouraged blacks to move to Liberia or to a location outside the South -- such as Kansas. And this movement had some limited success in forcing concessions from economic powers in the South. Again, the political structure African Americans created during this time survived the Jim Crow era in the South and contributed directly to the Great Migration to the North of the twentieth Century and, ultimately to the Civil Rights Movement of the mid-twentieth century. Professor Hahn has interesting and largely sympathetic things to say about Marcus Garvey and his movement in the 1920s for the repatriation of American blacks to Liberia.

This study is dense, highly detailed, and thoroughly documented. Professor Hahn displays a wealth of learning in the primary literature and in secondary studies. The footnote documentation is extensive. This book is probably not suitable for the reader coming to this subject matter for the first time. The book makes for heavy reading and it presupposes some basic knowledge in the reader about slavery, the Civil War, Reconstruction, and the many post-reconstruction movements in Southern politics in the different Southern states. It seems to me as well that the book owes a considerable debt to C Vann Woodward's study, now over 50 years old, "The Origins of the New South 1877 -- 1913" which covers some of the same material on African American political activism. Professor Hahn has written an outstanding work of American History, African American History, and Southern History. This book will be invaluable to serious students of our Nation's history.