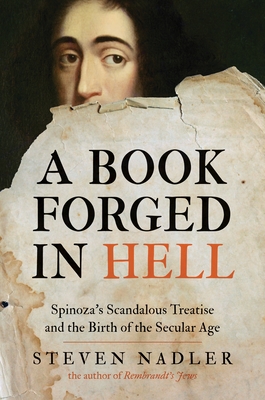 A Book Forged in Hell: Spinoza's Scandalous Treatise and the Birth of the Secular Age

The story of one of the most important--and incendiary--books in Western history When it appeared in 1670, Baruch Spinoza's Theological-Political Treatise was denounced as the most dangerous book ever published--godless, full of abominations, a book forged in hell . . . by the devil himself. Religious and secular authorities saw it as a threat to faith, social and political harmony, and everyday morality, and its author was almost universally regarded as a religious subversive and political radical who sought to spread ... Read More

The story of one of the most important--and incendiary--books in Western history When it appeared in 1670, Baruch Spinoza's Theological-Political Treatise was denounced as the most dangerous book ever published--godless, full of abominations, a book forged in hell . . . by the devil himself. Religious and secular authorities saw it as a threat to faith, social and political harmony, and everyday morality, and its author was almost universally regarded as a religious subversive and political radical who sought to spread atheism throughout Europe. Yet Spinoza's book has contributed as much as the Declaration of Independence or Thomas Paine's Common Sense to modern liberal, secular, and democratic thinking. In A Book Forged in Hell , Steven Nadler tells the fascinating story of this extraordinary book: its radical claims and their background in the philosophical, religious, and political tensions of the Dutch Golden Age, as well as the vitriolic reaction these ideas inspired. It is not hard to see why Spinoza's Treatise was so important or so controversial, or why the uproar it caused is one of the most significant events in European intellectual history. In the book, Spinoza became the first to argue that the Bible is not literally the word of God but rather a work of human literature; that true religion has nothing to do with theology, liturgical ceremonies, or sectarian dogma; and that religious authorities should have no role in governing a modern state. He also denied the reality of miracles and divine providence, reinterpreted the nature of prophecy, and made an eloquent plea for toleration and democracy. A vivid story of incendiary ideas and vicious backlash, A Book Forged in Hell will interest anyone who is curious about the origin of some of our most cherished modern beliefs. Read Less

All Editions of A Book Forged in Hell: Spinoza's Scandalous Treatise and the Birth of the Secular Age

Think Least of Death: Spinoza on How to Live and How to Die

Heretics!: The Wondrous (and Dangerous) Beginnings of Modern Philosophy

American Nietzsche: A History of an Icon and His Ideas

Matters of Exchange: Commerce, Medicine, and Science in the Dutch Golden Age

About 25 years ago, I was engaged in serious graduate study in philosophy and preparing to write a dissertation on Spinoza's "Theological-Political Treatise" (1670). I have had a lifelong interest in Spinoza and was interested in the Treatise because of the questions of how to interpret texts it raises in terms of its treatment of the Bible. Also, at the time, the Treatise was receiving far less attention than Spinoza's most famous work, the "Ethics". I never completed the dissertation but retained my interest in Spinoza and the Treatise.

The Treatise has received substantial attention since the time I was closely engaged with it. Historian Jonathan Israel has written a trilogy of lengthy, difficult books showing the great influence of Spinoza and the Treatise on Enlightenment thought and on the French and American Revolutions. "Radical Enlightenment: Philosophy and the Making of Modernity 1650-1750", "Enlightenment Contested: Philosophy, Modernity, and the Emancipation of Man 1670-1752", "Democratic Enlightenment: Philosophy, Revolution, and Human Rights, 1750-1790". Steven Nadler's new study, "A Book Forged in Hell: Spinoza's Scandalous Treatise and the Birth of the Secular Age" (2011) is much more accessible than Israel's studies and has a different focus. Nadler's aim is to offer a study of the Treatise to a general readership rather than simply to an academic audience in order to explain the book, its teachings, and its significance. Nadler is the William H. Hay II Professor of Philosophy at the University of Wisconsin -- Madison. He is the author of many books on Spinoza including a biography,"Spinoza: A Life", a study of Spinoza's excommunication, , and a study of Spinoza's Ethics,"Spinoza's 'Ethics': An Introduction".

Nadler quite properly emphasizes the radical revolutionary character of Spinoza's Treatise. The title of Nadler's book derives from one of the many criticisms leveled at the Treatise shortly after its publication. One Willem van Blijenburgh, who had been a correspondent of Spinoza's, wrote a lengthy book refuting the Treatise in which he said: "This atheistic book is full of studious abominations and an accumulation of opinions which have been forged in hell, which every reasonable person, indeed every Christian, should find abhorrent." Nadler documents many similar comments about the book as well as the events which led to the ban on the book two years after its publication. More importantly, Nadler explains what it was in Spinoza's Treatise that so disturbed its contemporary readers.

The Treatise concerns the relationship between religion and government and between religion and philosophy, broadly construed to include all forms of intellectual inquiry. Spinoza was concerned with religious wars, limitations on thought, and clerics influence on civil government. In a way that manages to be both cautious and bold, the Treatise takes a naturalistic view of God and prophecy, denies the existence of miracles, and takes a historical approach to the composition and interpretation of Scripture. Spinoza finds the Bible the work of human beings writing at particular times. Religion's goals are ethical in that it teaches people to be kind to one another, but it does not have further cognitive or doctrinal teachings. In a free society, for Spinoza, people should be free to believe as they wish. As Nadler quotes the basic teaching of the Treatise: "The state can pursue no safer course than to regard piety and religion as consisting solely in the exercise of charity and just dealing, and that the right of the sovereign, both in religious and secular spheres, should be restricted to men's actions, with everyone being allowed to think what he will and to say what he thinks."

Nadler's book begins with some brief biographical information about Spinoza and about his famous excommunication from the Amsterdam Jewish community. He also gives some important historical information about the Netherlands in Spinoza's day. Although there was in fact a larger degree of religious toleration in the Netherlands than in any other European community at the time, it was precarious and threatened by conflicts between monarchists and ecclesiastics on one hand and dissenting sects on the other hand. Spinoza wrote against a backdrop which thus contained both elements of liberty and the threat of repression. His aim was to increase the former. While there are universal lessons to be drawn from the Treatise, Nadler emphasizes that the book is also the product of a particular time and place. (For example, he writes: Moreover, while the Treatise remains of great relevance today, it is also a response to very particular and very complex historical exigencies, and we do not do it justice by trying to make it fit some transhistorical category of theories."

Most of the book consists of Nadler's close reading and exposition of Spinoza's text on the nature of god and prophecy, miracles, Scriptural interpretation and authorship, and political philosophy. Nadler ties the teachings of the Treatise to the teachings of Spinoza's much more obscure "Ethics". Nadler also draws important parallels between Spinoza and other thinkers. Thomas Hobbes receives attention throughout, both in the way Spinoza followed and the way he differed from him. Nadler also pays attention to the great medieval Jewish thinker Maimonides and offers his views on what Spinoza learned from Maimonides and where he disagreed. Nadler compares Spinoza's treatment of miracles in the Treatise with the famous work on the subject by a subsequent philosopher, David Hume, as well as with medieval Jewish and Christian understandings of miracles. Spinoza's views on tolerance and free speech are compared and contrasted with the views of John Locke, John Milton, and of the First Amendment to the United States constitution. The book considers Spinoza's alleged role as the first "secular Jew" (which Nadler rejects) and Spinoza's role as the founder of a philosophy of secularism and of secular government (which Nadler accepts.)

Although long relegated to obscurity, the Treatise has been a book of pervasive and lasting influence. As Nadler concludes:

"Without a doubt, the Theological-Political Treatise is one of the most important and influential books in the history of philosophy, in religious and political thought, and even in Bible studies. More than any other work, it laid the foundation for modern critical and historical approaches to the Bible. And while often overlooked in books on the history of political thought, the Treatise also has a proud and well-deserved place in the rise of democratic theory, civil liberties, and political liberalism. The ideas of the Treatise inspired republican revolutionaries in England, America, and France, and it encouraged early modern anticlerical and antisectarian movements."

I enjoyed revisiting the Treatise and thinking about it again through reading Nadler's study. Readers with a broad interest in philosophy and in ideas will benefit from Nadler's book and perhaps receive encouragement to read Spinoza's own book for themselves.