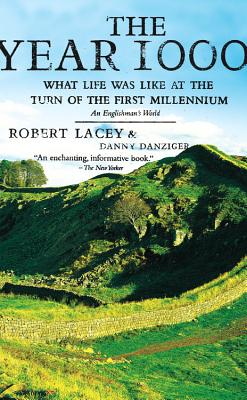 The Year 1000: What Life Was Like at the Turn of the First Millennium: An Englishman's World

How did people make sense of the end of one era and the start of another?"The Year 1000" plunges readers into the past in colorful detail and provides them with a historically accurate portrait of life on the cusp of the first millennium. Read More

How did people make sense of the end of one era and the start of another?"The Year 1000" plunges readers into the past in colorful detail and provides them with a historically accurate portrait of life on the cusp of the first millennium. Read Less

All Editions of The Year 1000: What Life Was Like at the Turn of the First Millennium: An Englishman's World

The Crown: The Official Companion, Volume 1: Elizabeth II, Winston Churchill, and the Making of a Young Queen (1947-1955)

Battle of Brothers: William and Harry - The Inside Story of a Family in Tumult

In Search of the Dark Ages

A World Lit Only by Fire: The Medieval Mind and the Renaissance: Portrait of an Age

An Enjoyable Trek Through the First 1000 Years

Another title might be: 'The Year 1000; World History Lite.' This is not intended to be disparaging of a very interesting work; the authors tried to sprinkle humorous and interesting facts (a reader might enjoy) amongst the dire and difficult conditions many folks lived under at the end of the first 1000 years .

If the reader is just looking for a nice, brief overview of the first century, this will suffice admirably. Otherwise, the authors make short excursions into many facets of life around the first millennium. Along with the quirky and interesting facts they share, readers will find many starting points for further study.

The reason I felt this book earned 5 stars has to do with the fascinating way the authors explained history. The text is so readable that I like to reread it every few years. I find new tangents to pursue as my understanding of world history expands.

The authors have snooped into everything related to the the first millennium. No subject is too smelly to pursue for knowledge's sake. A case in point: Human wastes and animal dung (those that remain in archaeological digs) are explained in the light of the Anglo-Saxon's distrust of too much cleanliness. The authors tell us that the Danes were more careful with their personal cleanliness and had an easier time finding mates than the rank-and-file Anglo-Saxons.

Both authors spend considerable time shooting down the stereotypes that have come down through the ages. They say that most educated folks knew the earth was round and that sailors would not drop off at the edge of the world. They weave an interesting story about how the English became stronger as they survived many invasions over the passing decades. They also show how the locals adapted to the organized religion (the Catholic Church) while blending it with their more pagan rites and attitudes.

Life in the monastery must have been difficult; talking was discouraged but a system of hand signals sufficed to keep the community cohesive and organized. This fact may seem trivial, but it is info like this that brings the English into our realm -- living and breathing.

Probably, a history buff would be offended by such a light-hearted look at world history. However, those of us just looking for an overview of Europe after 1000 years, will enjoy the writers' style and substance.