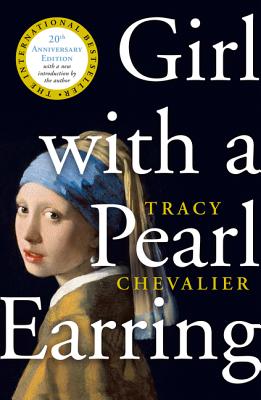 Girl With a Pearl Earring

OVER FIVE MILLION COPIES SOLD WORLDWIDE 'A phenomenon' Jessie Burton 'Dazzling' Daily Mail 'Truly magical' Guardian Those eyes are fixed on someone. But who? What is she thinking as she stares out from one of the world's best-loved paintings? Johannes Vermeer can spot exceptional beauty. When servant girl Griet catches his eye, she soon becomes both student and muse. But then he gives her his wife's pearl ... Read More

OVER FIVE MILLION COPIES SOLD WORLDWIDE 'A phenomenon' Jessie Burton 'Dazzling' Daily Mail 'Truly magical' Guardian Those eyes are fixed on someone. But who? What is she thinking as she stares out from one of the world's best-loved paintings? Johannes Vermeer can spot exceptional beauty. When servant girl Griet catches his eye, she soon becomes both student and muse. But then he gives her his wife's pearl earrings to wear for a portrait, and a scandal erupts that could threaten Griet's future... Vivid and captivating, this timeless modern classic has become a successful film and an international bestseller, with over 5 million copies sold around the world; now with a new introduction by the author. 'A veritable work of art... one of those rare novels where all the decisions made by the author appear inevitable and right' Rose Tremain 'Timeless, delicate and as exquisitely measured as one of Vermeer's paintings. Tense yet perfectly-paced and filled with the beauty of life's colours, Girl with the Pearl Earring is a masterpiece in its own right. Just a phenomenon. I will hold this novel close for the rest of my life' Jessie Burton, author of The Minaturist 'If ever a novel rightly deserves its "five millions copies sold" achievement, it is this dazzling little masterpiece ... Absolute magic' Daily Mail 'A portrait of radiance...Tracy Chevalier brings the real artist Vermeer and a fictional muse to life in a jewel of a novel' Time 'Chevalier doesn't put a foot wrong in this triumphant work ... It is a beautifully written tale that mirrors the elegance of the painting that inspired it' Wall Street Journal 'A wonderful novel, mysterious, steeped in atmosphere, deeply revealing about the process of painting...truly magical' Guardian 'It is no wonder that this beautifully-written story has sold more than five million copies and been made into a successful film. An absolute triumph' Woman's Weekly Read Less

All Editions of Girl With a Pearl Earring

At the Edge of the Orchard

The Lady and the Unicorn

Memoirs of a Geisha

A great read, smooth flowing and holds the readers attention to the very end.

I really liked it.

This book kept my interest the whole time and I will be reading more from this author.

The story behind the painting?

The cover of this book features 'Girl with a Pearl Earring', a famous work by the Dutch painter Johannes Vermeer (c 1665) and this book tells the story of the girl who is the subject of the painting.

Our story begins in 1664 when Griet, a teenager who lives with her parents and younger sister in Delft, is visited by a couple who wish to employ her as their maid. The husband is a famous painter who wishes Griet to clean his studio, along with other household duties. She is to start her new life the following day, so she must pack her few belongings and say her farewells to her family. Her father was a tile painter, but has lost his sight in an accident at work. Now he sees the world through the eyes of his elder daughter. Her brother had followed his father into the trade, and was studying away from home, which would leave only the younger sister at home once Griet moved out.

On arrival at her new place of work, Griet meets all the members of the family Vermeer, also the other domestic staff. Some are suspicious of her, and some are downright unpleasant to her, but she finds the occasional ally as she settles in. The painter requires meticulous cleaning of his studio, usually when he is absent on other business. Once in a while their paths cross, and after Griet overcomes her initial shyness, they slowly begin to talk. They gradually progress from discussing household matters to various aspects of his painting.

We discover the local people that Griet interacts with on a daily basis, also the people she befriends or who try to befriend her. Her work is hard and laborious and often gets her down, but she perseveres. Her life suddenly becomes more complicated when unwanted attention from a visitor sparks a chain of events which will rock the household to its foundations.

A well crafted historical tale, and a very enjoyable read.

Interesting book, easy to read, however, no great drama or emotions. Book seemed simple for it's subject matter.

Interesting peek into a different time and situation