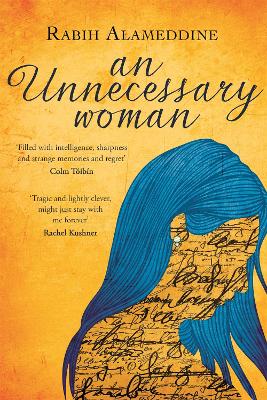 Aaliya Saleh lives alone in her Beirut apartment, surrounded by stockpiles of books. Godless, fatherless, childless, and divorced, Aaliya is her family's 'unnecessary appendage'. Every year, she translates a new favourite book into Arabic, then stows it away. The thirty-seven books that Aaliya has translated over her lifetime have never been read - by anyone. This breathtaking portrait of a reclusive woman follows Aaliya's digressive mind as it ricochets across visions of past and present Beirut. Colourful musings on ... Read More

Aaliya Saleh lives alone in her Beirut apartment, surrounded by stockpiles of books. Godless, fatherless, childless, and divorced, Aaliya is her family's 'unnecessary appendage'. Every year, she translates a new favourite book into Arabic, then stows it away. The thirty-seven books that Aaliya has translated over her lifetime have never been read - by anyone. This breathtaking portrait of a reclusive woman follows Aaliya's digressive mind as it ricochets across visions of past and present Beirut. Colourful musings on literature, philosophy, and art are invaded by memories of the Lebanese Civil War and Aaliya's own volatile past. As she tries to overcome her ageing body and spontaneous emotional upwellings, Aaliya is faced with an unthinkable disaster that threatens to shatter the little life she has left. A love letter to literature and its power to define who we are, the prodigiously gifted Rabih Alameddine has given us a magnificent rendering of one woman's life in the Middle East. Read Less

All Editions of An Unnecessary Woman

The Angel of History

Koolaids: The Art of War

The Boy from Aleppo Who Painted the War

A Tale for the Time Being

How to be Both

A Portrait Of A Woman

Set in Beirut, Rabin Alameddine's novel "An Unnecessary Woman" (2013) consists of the reflections of a solitary, highly literate Lebanese woman in her early 70's. Aaliya Saleh, 72, has lived alone for over 50 years in a modest apartment during a brief, loveless marriage which ended in her early 20's and then after the divorce. For most of her life, she has managed a bookstore and over the years has read omnivorously. She has, in fact, stolen books from her employer throughout her tenure. Aaliya is a translator. Every year, she selects an important book to translate into Arabic. Aaliya is fluent in French and English as well as Arabic, but she choses to translate books originally in another language, typically Russian or German, and read them in English and French sources. Her translations are piled away in boxes and no one has seen them. Aaliya lives a seemingly quiet life, without lovers or friends, with the exception of a slightly older woman, Helen, who has died some years earlier.

Aaliya tells her story in the first person in what soon becomes an inimitable voice. She describes her childhood, including the death of her father when she was 2, her unfortunate marriage, a short sexual encounter, and her feelings about getting old. She describes her acquaintances and family in sharp, frequently uncomplimentary terms. Aaliya also describes Beirut, the city where she has spent her entire life, and which she knows thoroughly. She had lived through the Lebanese Civil War and offers graphic descriptions of that combat. But most of all, Aaliya describes her interior life -- the life of the mind filled over the years with novels, poetry, philosophy, and music together with her ongoing and private translation project.

Aaliya is highly allusive in matters of reading and listening. As she speaks, she enters into what she admits are "digressions" in which she moves from a depiction of the people and events around her to literature. She describes or mentions a welter of books from the Ancient Greeks to the present and shows a deep engagement with her reading. When Aaliya speaks in her own voice without a specific literary allusion, her descriptions tend to be sharp, punchy, sometimes ironic, and on-point. Frequently, she makes literary allusions in her speech which are not tied to their source but which readers may recognize. When she brings literature or music into her speech, her references sometimes have the feel of pedantry or name-dropping. She can be a bore. At other times, the allusions are highly effective.

Aaliya also engages in extended reflections on literature for its own sake. Her discussions are almost always provocative and thoughtful. They range from the nature of the translation process, to writers she admires, such as Sebald, or Pessoa, to writers she dislikes, such as Hemingway and most American authors, whom she finds shallow and unintellectual. She is a great admirer of the philosopher Spinoza who "developed the concepts of religious freedom, freedom of the press, democratic republicanism, and a secular morality detached from theology." Aaliya has penetrating things to say about the tendencies of contemporary writers and readers to over-develop motivations for the actions of their characters. She discusses the over-use of the Holocaust in literature and offers observations on how to separate felt, good writing on the subject from the trite.

The life of the mind comes through in this book in a way that might mean most to those readers who have shared in it. But the life comes at a cost. Readers will understand Aaliya differently. With all her reading and literary projects, she is a lonely person. She makes a great deal of her solitude, of being without a sexual companion or, with the exception of the deceased Helen, a friend. It shows. Her life as a loner has given her a sharply judgmental critical tongue towards her fellows. She lacks a feeling of connectedness to other people and can be seen as withdrawing into books. It is a loss, in my view, not to have a committed sexual relationship, to have but a single friend, and to elevate literature to a totem -- or religion. Loners and outsiders frequently get romanticized in literature and in people's perceptions of them. The author. Almeddine, has got inside of his character, and he knows her well.

"An Unnecessary Woman" is a beautifully done depiction of an individual person. I loved much of the writing and much of the Aaliya's discussions of literature, philosophy, and music. There is much in the book, and much that remains outside.