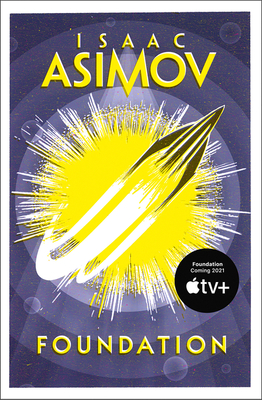 For 12,000 years, the Galactic Empire has ruled supreme. Now it is dying. It is up to Hari Seldon, the creator of psychohistory, to gather the best minds in the Empire to preserve knowledge and save mankind. Read More

For 12,000 years, the Galactic Empire has ruled supreme. Now it is dying. It is up to Hari Seldon, the creator of psychohistory, to gather the best minds in the Empire to preserve knowledge and save mankind. Read Less

All Editions of Foundation

Stranger in a Strange Land

One of the best Sc-ifi books of the 20th century. Asimov was a master of the genre

Quick easy read. Makes you think and read the next one as soon as possible.

A Subtle, Clever, Sweeping Vision of the Future

The beginning of what is undoubtedly Asimov's greatest creation. Using a mathematical system of his own devising that allows sociological trends to be treated statistically, Hari Seldon predicts the fall of the Galactic Empire, and sets in motion a plan to erect a second and greater empire after millennium of turmoil. This novel (actually more of a series of short stories) chronicles the first couple hundred years of that millennium. Subtler by far than most science fiction, Foundation is a thoroughly original and clever work of art.

A book of ideas

Isaac Asimov's "Foundation" is a mixed bag. The structure is a series of vignettes, beginning before the Foundation is even started, and flashing into the timeline at points of crisis along the way, where events come to a head so great that it could mean the survival of their culture. In these brief glimpses, one or two men must play their hand as skillfully as they are able in order to ensure the success of their society.
Cons first: There are strong whiffs of dated-ness, in that the technologically advanced society of the Foundation is completely based on nuclear power, while the barbaric kingdoms which surround them are slaves to fossil fuels. Obviously nuclear power has possibilities and one day maybe we'll all get behind it again, but in light of our civilization's historic rough patches with nuclear power, it's a little jarring how Asimov turned it into some sort of magic bullet.
Also, in all 296 pages, there is one woman. Total. And she doesn't show up until page 216. And she gets five pages of face time. Total. And she's kind of a shrew. That was pretty glaring.
My last con is that I had a little bit of trouble suspending my disbelief of the entire concept of "psychohistory," which is the whole premise of the book. The founder of the Foundation arranged circumstances to eliminate all variables so that the future generations of the Foundation would be forced down the set path towards forming the Second Empire a thousand years after the fall of the First. Really? He planned for and eliminated ALL variables? That's just a little hard to swallow.
Now for the pros: This is a book of ideas, not of characters, and it's centered around a Big Idea that is, well, pretty cool. I admire the concept that the future can be foreseen based upon a mathematical analysis of psychological and cultural forces, because while I had trouble with it at some points, it's still plausible as a sci-fi concept, and again, cool.
There's also something really satisfying about seeing smart characters finagle their way out of seemingly impossible situations as they identify how to come out ahead in each crisis. Asimov's writing is simple and direct, directing focus away from style or character and onto The Idea.
Fair enough. I might pick up another book in the series to see where it goes from here.

This is a great sci.fi. book. Asimov has created a world that, although futuristic, can be understood and related to. This is very intertaining reading and hightly recommended