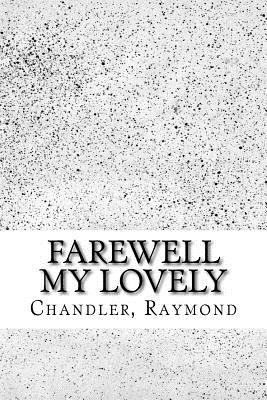 Farewell, My Lovely is a classic novel by Raymond Chandler, the master of hard-boiled crime. Eight years ago Moose Malloy and cute little redhead Velma were getting married - until someone framed Malloy for armed robbery. Now his stretch is up and he wants Velma back. PI Philip Marlow meets Malloy one hot day in Hollywood and, out of the generosity of his jaded heart, agrees to help him. Dragged from one smoky bar to another, Marlowe's search for Velma turns up plenty of dangerous gangsters with a nasty habit of shooting ... Read More

Farewell, My Lovely is a classic novel by Raymond Chandler, the master of hard-boiled crime. Eight years ago Moose Malloy and cute little redhead Velma were getting married - until someone framed Malloy for armed robbery. Now his stretch is up and he wants Velma back. PI Philip Marlow meets Malloy one hot day in Hollywood and, out of the generosity of his jaded heart, agrees to help him. Dragged from one smoky bar to another, Marlowe's search for Velma turns up plenty of dangerous gangsters with a nasty habit of shooting first and talking later. And soon what started as a search for a missing person becomes a matter of life and death . . . 'Anything Chandler writes about grips the mind from the first sentence' Daily Telegraph 'One of the greatest crime writers, who set standards others still try to attain' Sunday Times 'Chandler is an original stylist, creator of a character as immortal as Sherlock Holmes' Anthony Burgess Best-known as the creator of the original private eye, Philip Marlowe, Raymond Chandler was born in Chicago in 1888 and died in 1959. Many of his books have been adapted for the screen, and he is widely regarded as one of the very greatest writers of detective fiction. His books include The Big Sleep, The Little Sister, Farewell, My Lovely, The Long Good-bye, The Lady in the Lake, Playback, Killer in the Rain, The High Window and Trouble is My Business. Read Less

All Editions of Farewell My Lovely

Reading Chandler For The First Time

I have read David Goodis, James Cain, and the two Library of America volumes of American noir from the 1930s -- 1950s, but I have only now read this book, "Farewell, My Lovely" (1940), my first by Raymond Chandler (1888 -- 1959). As do Goodis and Cain, for example, Chandler takes what is often regarded as the formulaic, stereotyped genre of American crime writing and transforms it into literature.

"Farewell, My Lovely" is Chandler's second novel featuring the private investigator Philip Marlowe, who became the model for many similar characters. The book is told in the first person and is set in Los Angeles and its environs. The plot of the novel is coincidence-ridden and somewhat patched together. It moves from a murder in an African American gambling establishment called Florian's to a jewel heist, a psychic, gambling ships, several more murders, and femme fatales. It takes time to get into the plotting and some of the elements appear not to add up.

The plotting is the least important element of this book, but at times it stands in the way. Much of the story gets tied together well at the end and it builds. "Farewell, My Lovely" has many other qualities that make it rewarding. These include Chandler's language, characterizations, sense of place, and view of the human condition, as I describe a little more below.

Marlowe speaks in the tough, hard-boiled style of a crime novel, but he has the poet's eye for detail as much as the gimlet eye of the detective. In particular, he shows a gift for the strikingly appropriate and imaginative metaphor or simile that leaps off almost every page.

Although a detective easily becomes a stock figure, Chandler's Marlowe is a complex person with vulnerabilities and flaws beneath a hard exterior. He is thoughtful as well as hard-drinking. Similarly, virtually every character in this book is well-defined. Chandler finds both good and bad in unlikely places and is attuned to the difficulties of understanding and categorizing any person.

Then, there is the portrayal of Los Angeles. Chandler concentrates of the poor seedy sections but also describes more economically comfortable areas together with suburbs and the water. He offers a sense of place and an eye for detail. He is one of a select group of writers, including Cain, Nathanael West, John Fante, and Charles Bukowski who make Los Angeles come to life.

Finally, Chandler offers a view of the human condition that includes each of these three elements and more and that turn "Farewell, My Lovely" into literature. The novel is sad and pessimistic in its view of life but shows as well understanding. "He's a sinner -- but he's human", one of the characters says to Marlowe late in the book in an observation that applies to the entire story. Individuals try to make their ways among corruption, sleaze, frustration, and sadness; but with toughness and a suggestion of the importance of fighting for the good. There are few heroes and few villains.

Here is a passage from late in the novel that captures the features I have tried to describe. Marlowe is lying in bed in a cheap waterfront hotel and thinks about some of the events and people that have figured in the story up to that point.

"It got darker. I thought; and thought in my mind moved with a kind of sluggish stealthiness, as if it was being watched by bitter and sadistic eyes, I thought of dead eyes looking at a moonless sky, with black blood at the corners of the mouths beneath them. I thought of nasty old women beaten to death against the posts of their dirty beds. I thought of a man with bright blond hair who was afraid and didn't quite know what he was afraid of, who was sensitive enough to know that something was wrong and too vain or too dull to guess what it was that was wrong. I thought of beautiful rich women who could be had. I thought of nice slim curious girls who lived alone and could be had too, in a different way. I thought of cops, tough cops that could be greased and yet were not by any means all bad... Fat prosperous cops with Chamber of Commerce voices.... Slim, smart and deadly cops... who for all their smartness and deadliness were not free to do a clean job in a clean way. I thought of sour old goats ... who had given up trying. I thought of Indians and psychotics and dope doctors." [Names of characters have been deleted from the quote.]

I was glad to get to know Chandler and Philip Marlowe at last through "Farewell, My Lovely". I also learned a great deal from some of the many thoughtful reader reviews of this book.

Chandler's prose is as sharp as a razor and he's brilliant at creating situations. Fascinating novel.

My husband and I enjoyed this book. It is definitely worth buying. It is well written and a great read. It is not just your everyday detective novel. It was also a little like stepping back in time, which is very interesting.I would highly recommend it. Everyone should have at least one of his books in their collection.