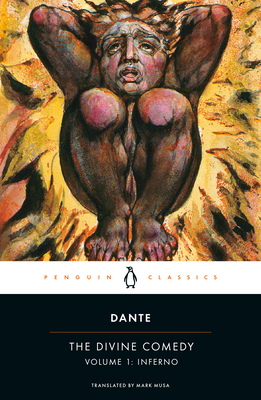 This vigorous translation of the poet's journey through the circles of hell recreates for the modern reader the rich meanings that Dante's poem had for his contemporaries. Read More

This vigorous translation of the poet's journey through the circles of hell recreates for the modern reader the rich meanings that Dante's poem had for his contemporaries. Read Less

All Editions of The Divine Comedy: Volume 1: Inferno

The Divine Comedy: The Inferno, the Purgatorio, the Paradiso

The Fate of Souls After Death, Part I

Written in the early 1300s, Dante's Inferno is the first of three epic poems from The Divine Comedy, a book written by renowned Renaissance poet Dante Alighieri. In this epic poem, the narrator (Dante) is accompanied by the Roman poet Virgil as the pair travels down into the depths of Hell. As the narrator and Virgil descend, they encounter many people from Greek and Roman mythology as well as numerous individuals from Renaissance Italy; we also witness the punishment of those in Hell for the sins of gluttony, greed, hypocrisy, violence, and many other sins. I have to say I was immediately drawn into this book and really enjoyed it from start to finish; this is one of the classics of literature that is highly readable, very much accessible, thought provoking, and quite entertaining. The subject of this review is the version of The Inferno translated by Mark Musa; this version is an easy-to-read translation and includes commentary and summaries for each canto. Now, I am looking forward to reading the second part of The Divine Comedy: Purgatory. Read this book. You will not be disappointed.

A must have book for lovers of Italian and European literature by one of the three greatest Italian poets.