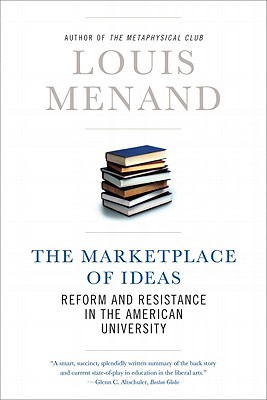 The Marketplace of Ideas

According to Harvard professor Menand, at a time when competition to get into and succeed in college has never been more intense, universities are providing a less useful education. In "The Marketplace of Ideas," he assesses what is important in a traditional university---and what is not. Read More

According to Harvard professor Menand, at a time when competition to get into and succeed in college has never been more intense, universities are providing a less useful education. In "The Marketplace of Ideas," he assesses what is important in a traditional university---and what is not. Read Less

All Editions of The Marketplace of Ideas

The Ideological Origins of the American Revolution: Enlarged Edition

The liberal imagination; essays on literature and society.

What Is Ancient Philosophy?

The American Evasion of Philosophy: A Genealogy of Pragmatism

Louis Menand On The Marketplace of Ideas

In 1903, the philosopher William James wrote an essay, "The PhD Octopus" in which he expressed concern about over-specialization in the academic world and about the increased and not entirely beneficial effect on students and teachers alike resulting from efforts to pursue the PhD. Louis Menand wrote about James and his pragmatist colleagues in his Pulitzer-prize winning study "The Metaphysical Club" which broadly examines changes in American intellectual life during the period of roughly 1870- -- 1920. Menand's most recent book, "The Marketplace of Ideas: Reform and Resistance in the American University" (2010) makes no mention of James or his essay. But Menand uses the history of the reform of the American university system during the late 1800s to suggest how and why the structure of American higher education established over 100 years ago may not be entirely conducive to the educational role of the university in the late 20th and early 21st Centuries. The book is succinctly and engagingly written but also difficult and challenging. Menand is the Anne T. and Robert M. Bass Professor of English at Harvard University.

Menand addresses four questions about contemporary higher education in the United States: "Why is is so hard to institute a general education curriculum? Why did the humanities disciplines undergo a crisis of legitimation? Why has 'interdisciplinary' become a magic work? And why do professors all tend to have the same politics?" (p. 16) Each question is discussed in a detailed chapter drawing on both history and on contemporary studies of the state of the American university. As he did in "The Metaphysical Club" Menand pays much attention to the educational reforms in post-Civil War Harvard under its president, Charles Elliott. Elliott drew a sharp distinction between professional and liberal education. Under his administration, a baccalaureate degree became a prerequisite for education in law, medical and other professional schools. Undergraduate education was not intended to be career-oriented. Rather, during this phase of their lives, students were encouraged to pursue knowledge and learning for their own sakes. Liberal arts faculty, the humanities, social sciences, and the sciences to a degree, were not expected to be career oriented but to encourage the pursuit of disinterested knowledge. The partial exception to this would be in the training of other scholars in graduate PhD programs who would carry on the research and teaching of their disciplines. The lines of the various disciplines themselves, such as English, philosophy, history, social sciences, were themselves established in the universities during the late 1900s. Through a process Menand develops, they assumed a degree of fixity which was became both useful and problematic.

Menand applies his historical approach to the questions he addresses. The demands on the university have stretched beyond the reforms of Charles Elliott and others. Thus, from the earliest years of the 20th Centuries, some universities tried to counter trends towards academic specialization by establishing either distribution requirements in courses students were required to take or a core curriculum separate from a departmental major in which all students were to be exposed to seminal books and ideas in literature, history, or science. These programs, particularly the latter, are difficult to establish and maintain because they cut across entrenched lines of academic disciplines and specializations. But the purpose of these programs is to show students how education and ideas matter in life and to socialize students, to a degree, by exposing them to a range of books and methodologies deemed valuable. Disciplinary lines and disinterested research in part are in tension with this idea.

So as well, Menand shows how each ostensibly separate academic discipline, again mostly in the humanities and social sciences, is in part predicated upon assumptions and upon human experiences arising from outside the boundaries of the discipline. He finds that this point has been made sharply in recent years by deconstruction and less notorious forms of critical theories. While each field of academic study has tended to become more intensive and ingrown, it faces challenges from other forms of thought. Menand takes this difficult tendency and uses it to explore what he calls the "crisis of legitimation" in the humanities and the difficulties of "interdisciplinary" programs, in which specialists from different academic fields try to team-teach or to create an academic program crossing narrow lines. These programs, Menand believes, usually have unsatisfactory results as specialists in different programs find themselves talking past each other.

In the final chapter of the book, Menand presents statistical evidence that shows that most American professors are remarkably similar in sharing a highly liberal political outlook which varies substantially from the overall political outlook of other Americans. He asks why this might be the case and tends to find the answer in the long process of education in the liberal arts leading the PhD. Professional education, including PhD education includes socialization as well as intellectual functions. Many humanities students require twice the length of time to earn the PhD in their chosen field than do law or medical students. They compete for academic positions that are becoming increasingly scarce with the de-emphasis on the liberal arts. The training, paradoxically, inspires both a great deal of personal independence in thought and a great deal of conformity. The situation does not admit of a ready answer. On the one hand, there is a need for a degree of independence in the academy from the community at large as the role of the university is not to be a "mere echo of public culture." (p.158) On the other, hand, the self-selection and self-replication character of the various PhD programs, Menand argues, creates its own biases and prejudgments among the university community. Menand suggests either shortening the PhD program or restructuring it to make it more accessible and less specialized to a specific discipline.

I was a liberal arts (philosophy) major many years ago but did not pursue an academic career. But I have continued to read and, I trust, to reflect, through my life. My education may have contributed to what I became. From outside the university, I remain interested in the life of the mind and its relationship to human life and needs. Menand has written a difficult book, but one that will be of interest to those concerned with, both in and out of academia, education and its purpose.