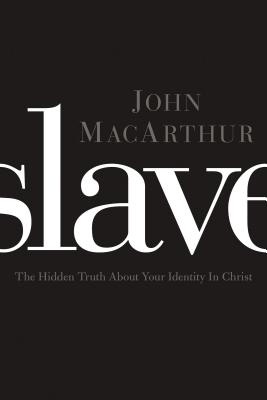 Slave: The Hidden Truth about Your Identity in Christ

The Bible describes believers as His slaves. They have been bought with a price and now live for Christ as a people for His own possession. In this gripping book, Dr. MacArthur uses deep Bible teaching and historical evaluation to expertly uncover the one forgotten word that restores the Bible's definition of true Christian freedom. (Practical Life) Read More

The Bible describes believers as His slaves. They have been bought with a price and now live for Christ as a people for His own possession. In this gripping book, Dr. MacArthur uses deep Bible teaching and historical evaluation to expertly uncover the one forgotten word that restores the Bible's definition of true Christian freedom. (Practical Life) Read Less

All Editions of Slave: The Hidden Truth about Your Identity in Christ

Because the Time Is Near: John MacArthur Explains the Book of Revelation

Twelve Extraordinary Women: How God Shaped Women of the Bible, and What He Wants to Do with You

The Gospel According to Jesus: What Is Authentic Faith?

Slave the Study Guide: The Hidden Truth About Your Identity in Christ

Because the Time Is Near: John MacArthur Explains the Book of Revelation

The Jesus You Can't Ignore: What You Must Learn from the Bold Confrontations of Christ

The Truth War: Fighting for Certainty in an Age of Deception

A new look at the Master

The beginning of wisdom, a Chinese proverb states, is to begin calling things by their correct name.

In Slave: The Hidden Truth About Your Identity in Christ , John MacArthur explores the Greek term ?doulos? and its mistranslation in many contemporary bible translations which has led to a skewed perspective of the Christians relationship to God.

To say that John MacArthur is a powerhouse of a scholar would be an understatement. His ministry is founded on the study and teaching of the bible as the inerrant word of God. MacArthur?s? thorough examination of the terms ?slave? and ?master? provided a clear history of each of these words revealing the vast difference in definitions from the early Church time frame until now.

Not being a bible scholar, just your average Christian, I learned much reading this book. The part that had me in total agreement was the discussion of the growing number of ?easy grace? teachings and other seeker friendly approaches proving that the enemy need only skew the meaning of a word to redirect the message.

To consider oneself a slave, owned by another and without authority over oneself, is the correct view of a Christian. Prosperity teaching does not promote a slave mentality. How can a slave be interested in their own prosperity when they have no authority?

Overall my take on this book is that it speaks squarely to who do not consider holiness as the Christian standard. The mistranslation of the word ?doulos? is but a small change that has had a very significant impact. Each of the points are well referenced and footnoted throughout the book. It is a short book (only 240 pages) and the focus is s heralding the correct view of a Christians relationship with Christ.

Some books encourage and strengthen my faith. This one did just that. With the wave of shifting morals and seeker sensitive marketing of the Church, it was good to read words of truth.

The truth is that we are all slaves whether it be to God or to sin. We will either recognize our condition and turn to a loving God or we will exalt our importance and continue our lives in deception.

Recommended highly to the new Christian who may be confused about doctrine or the seasoned saint who needs to gain new perspective on his/her relationship to Jesus.

Disclaimer:
The review copy of this book was provided by Thomas Nelson and donated to the library of Westwood Baptist Church.

The back paper jacket to the book caught my attention: "A COVER-UP OF BIBLICAL PROPORTIONS: Centuries ago, English translators perpetrated a fraud in the New Testament, and it's been purposely hidden and covered up ever since. Your own Bible is probably included in the cover-up!"

WHAT? Are we to understand that Bible translators for centuries, hundreds if not thousands of highly-trained knowledgeable men of God, have kept a well-guarded secret about the true meaning of the Bible that only NOW Dr. MacArthur will be the one scholar who will bring us the real scoop?

Yes, this is exactly what the book would have us to believe, that the common Greek term "doulos" has been mistranslated in every major version of the Bible since the earliest of printed Bible translations. According to MacArthur, "doulos" should be translated primarily if not exclusively as "slave." Most modern translators (NASB, NIV, KJV, NKJV, ESV)as well as common Greek-English lexicons interpret the term in a variety of ways as, "servant," "slave," "bond servant," "bondman," or "attendant." MacArthur also states on pp. 29-30 that the proper meaning of the Old Testament's nearest equivalent term, "'ebed" has also been hidden by modern translators: "The King James Version, for example, never translates 'ebed as 'slave'---opting for 'servant' or 'manservant' the vast majority of the time. But contrast that with the Septuagint, a Greek translation of the Old Testament from before the time of Christ. It translates 'ebed with forms of 'doulos,' or 'slave' more than 400 times!" WHAT?? The LXX translated the Old Testament from Hebrew to Greek, NOT to English! So MacArthur is leaping to an inappropriate conclusion about the meaning of the Hebrew in this case.

In fairness to MacArthur, whom I consider to be a scholar, I did appreciate his copious use of footnotes which were easy to find at the bottom of each page (although he quoted one source heavily---Murray J. Harris, "Slave of Christ"---23 times). And I thought that his historical look at ancient Near-Eastern slavery was interesting and informative.

My greatest problem with the book was that the author, MacArthur, took the ancient images of slavery and superimposed them onto modern Christianity with the intent to create the notion that our normative relationship with God and our service to God should be that of a slave to a master, instead of that of a child of God responding out of love and gratitude to an omnibenevolent (all loving) Father God. With this slave to master representation set into place, the author proceeded to promote his standard lordship salvation doctrine dressed in new clothes, slave garb. He even used much of the same argumentation as he used in "The Gospel According to Jesus." And, once again, he freely denigrated and caricaturized Free Grace theology, especially in chapter five.