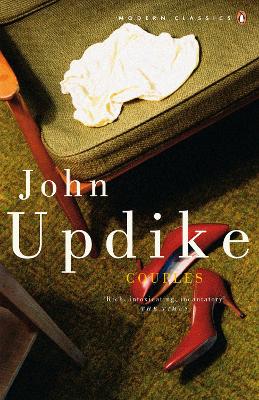 An intoxicating yet sensitive novel about the sexual experiences of ten couples from Tarbox, New England. Well-to-do, sociable, articulate but dangerously unfulfilled; they play word games in the evening and adultery all year round. Read More

An intoxicating yet sensitive novel about the sexual experiences of ten couples from Tarbox, New England. Well-to-do, sociable, articulate but dangerously unfulfilled; they play word games in the evening and adultery all year round. Read Less

All Editions of Couples

The Witches of Eastwick

A Month of Sundays

John Updike once said that the thesis of his 1968 novel is that "sex is the emergent religion," and that point is rather heavy-handedly dramatized with the symbolic conflagration of the small New England town's church at the close of the novel.

Tarbox is the name of the town, and that too is overly freighted with symbolism as a place where exurban young marrieds come to settle, stall in their careers, feel a staleness in their marriages, and cannot escape.

Set in the early Sixties on the cusp of change, before and after President Kennedy's assassination, the novel does well as a tragicomedy of suburban manners--the bibulous dinner parties, the social cruelty of their parlor games, the afternoon basketball games, the neglect of children.

If the novel can be said to have a protagonist, it is Piet Hanema, a building contractor whose affairs are recounted with an astonishing scrupulosity. A critic has said that Couples is Updike's most Joycean book in its sexual candor, but it fails to measure up to the work of that modernist master, because Updike's vaunted prose style--part Flaubert, part Nabokov--falters at moments, and the novel feels airless and claustrophobic in a way Ulysses' encyclopedia capaciousness and prose parodies don't.

Updike's weakness, critic Wilfrid Sheed wrote, isn't too much beauty but "too much precision," and that seems right to me. At times in this novel, the author writes more like a clinician diagnosing a social malady than a novelist fully in love with his characters.