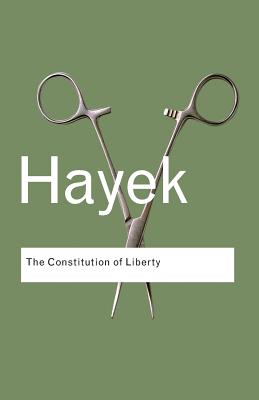 The Constitution of Liberty

"Working after the war, Hayek's writing was very much against the tide of mainstream Keynesian economic thought. But in the 1970s and 1980s--the eras of Thatcherism and Reaganomics--he was championed as a prophet of neo-liberalism by those who were seeking to revolutionize the post-war social consensus. [This book is meant for] those seeking to understand ideas that have become the orthodoxy in the age of the globalized economy"--Adapted from publisher description. Read More

"Working after the war, Hayek's writing was very much against the tide of mainstream Keynesian economic thought. But in the 1970s and 1980s--the eras of Thatcherism and Reaganomics--he was championed as a prophet of neo-liberalism by those who were seeking to revolutionize the post-war social consensus. [This book is meant for] those seeking to understand ideas that have become the orthodoxy in the age of the globalized economy"--Adapted from publisher description. Read Less

All Editions of The Constitution of Liberty

Books by F. A. Hayek

The pure theory of capital.

The Trend of Economic Thinking: Essays on Political Economists and Economic History

The road to serfdom: text and documents

by F A Hayek

by Friedrich A Von Hayek

The Fatal Conceit: The Errors of Socialism

by Friedrich A Von Hayek

An Exposition Of A Theory Of Liberty

Hayek's "The Constitution of Liberty" is a comprehensive work of political philosophy. It sets forth, defends, and applies an important view of the nature of human liberty, government, and economics that is worth considering, at the least, and that has much to commend it. The book is carefully written and argued with extensive and substantive footnotes and with an "analytical table of contents" that is useful in following the details of the argument. The book is highly erudite. It is also passionately argued. Hayek believed he had an important message to convey.

Hayek states his theory in part I of this book, titled "The Value of Freedom". He seeks to explore the nature of the ideal of freedom (liberty) and to explain why this ideal is valuable and worth pursuing. He finds the nature of freedom in the absence of coercion on a person by another person or group. He argues that in giving the broadest scope of action to each individual, society will benefit in ways that cannot be foreseen in advance or planned and each person will be allowed to develop his or her capacities. Hayek summarizes his views near the end of his book:

" [T]he ultimate aim of freedom is the enlargement of those capacities in which man surpasses his ancestors and to which each generation must endeavor to add its share -- its share in the growth of knowledge and the gradual advance of moral and aesthetic beliefs, where no superior must be allowed to enforce one set of views of what is right or good and where only further experience can decide what should prevail."

The book focuses on issues of economic freedom and on the value of the competitive market. Hayek has been influenced by writers such as David Hume, Edmund Burke, and John Stuart Mill in "On Liberty."

Part II of the book discusses the role of the State in preserving liberty. It develops a view of law which sees its value in promoting the exercise of individual liberty. The approach is historic. Hayek discusses with great sympathy the development of the common law and of American constitutionalism -- particularly as exemplified by James Madison.

In Part III of the book, Hayek applies his ideas about the proper role of government in allowing the exercise of individual liberty to various components of the modern welfare state. Each of the chapters is short and suggestive, rather than comprehensive. Hayek relies on technical economic analysis, and on his understanding of economic theory, as well as on his philosophical commitments, in his discussion. What is striking about Hayek's approach is his openness (sometimes to the point of possible inconsistency with his philosophical arguments). He tries in several of his chapters to show how various aspects of the modern welfare state present threats to liberty in the manner in which he has defined liberty. But he is much more favorably inclined to some aspects of these programs than are some people, and on occasion he waffles. This is the sign of a thoughtful mind, principled but undoctrinaire.

I think there is much to be learned from Hayek. He probably deserves more of a hearing than he gets. For a nonspecialist returning to a book such as this after a long time off, it is good to think of other positions which differ from Hayek's in order to consider what he has to say and to place it in context. For example, in an essay called "Liberty and Liberalism" in his "Taking Rights Seriously" (1977) the American legal philosopher Ronald Dworkin discusses Mill's "On Liberty" with a reference to Hayek. Dworkin argues that for Mill, liberty meant not the absence of coercion but rather personal independence. Mill was distinguishing between personal rights and economic rights, according to Dworkin. Thus Dworkin would claim that Hayek overemphasizes the value of competitiveness and lack of state economic regulation in the development of Hayek's concept of liberty.

The British political thinker Isaiah Berlin seems to suggest to me, as I read Hayek's argument, that there are other human goods in addition to liberty, as Hayek defines liberty. Further, Hayek does not establish that liberty, as he understands it, is always the ultimate human good to which others must give place. It may often be that good, but there may also be circumstances in which other goods should be given a more preeminent role when human well-being is at issue. In thinking about Hayek, it would also be useful to understand and to assess his concept of liberty by comparing and contrasting his approach to that of John Rawls in his "A Theory of Justice."

Hayek's book is important, thought-provoking and valuable. Probably no writer of a book of political philosophy can be asked for more. It deserves to be read and pondered. It has much to teach, both where it may persuade the reader and where it encourages the reader to explore competing ideas.

Hayek For the Individual, for the Economy

Hayek's Constitution of Liberty is considered his most important work. Thatcher slammed the book down in the House of Lords screaming, "That's what I believe." In this work, Hayek explores deeply the concept of freedom in light of economic considerations and in terms of the value of individuality. Hayek is generally a worthwhile read and best complemented by Karl Popper.

This is THE book on classical liberty. Could not be further from today's lefty or so-called 'liberal' thinking, while the chapter on 'Why I am not a conservative' is a masterpiece. Wish I had read this book when I was very much younger!