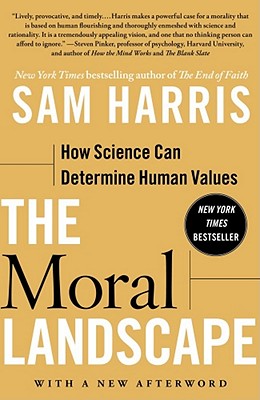 The Moral Landscape: How Science Can Determine Human Values

Bestselling author Harris dismantles the most common justification for religious faith--that a moral system cannot be based on science. (Philosophy) Read More

Bestselling author Harris dismantles the most common justification for religious faith--that a moral system cannot be based on science. (Philosophy) Read Less

All Editions of The Moral Landscape: How Science Can Determine Human Values

The End of Faith: Religion, Terror, and the Future of Reason

Waking Up: A Guide to Spirituality Without Religion

The End of Faith: Religion, Terror, and the Future of Reason

This book purports to show that objective morality can be determined scientifically, particularly through studies of the brain. Where the book is right, it is largely common sense, taking the view that religious authority is no basis for morality, which is a complex issue. Where I take issue with the book is in the author's adherence to philosophical materialism, his abhorrence of relativism, and his consequent conviction that there is a correct answer.

Sam Harris claims in the book that science can be a better source of morality than religion but I never saw how science generates morality. All he does is to explain the states of the brain when somebody carries out certain behaviors. When it comes to explaining the actual source of different behaviors, instead of grounding it in real science, as he seems to claim in his thesis, he resorts to philosophy, especially epistemology and metaphysics.

Maybe Mr. Harris' book will be able to appeal to (or should I say confuse?) those who have no knowledge of philosophy and make them think that he is explaining morality scientifically but to us who are philosophers, he is just a parrot bully. Parrot because while he seems to claim originality, all he does is recycle the philosophies of utilitarianism and hedonism and then combine them to give them the name "WELL BEING". This is crafty plagiarism!

Besides, Mr. Harris is inconsistent when he tries to play philosopher. For instance, he denies that human beings have free will and yet invites us to hold people accountable for their actions. What an absurdity!

The Title is All

San Harris---sounds like the guy at the local pro shop. In this case, it is Professor, one who draws on neuroscience, philosophy, history and our commonality as human beings to formulate an argument that we do not need "Holy" books, Scripture or religious testimony to form a framework for moral living. Reading this is not a romp through the comic pages, nor is it a titanic struggle with Nietzschian prose. Harris' ideas and writing are accessible, but not shallow; strongly stated but not antagonistic.
Best read with bookmarks, so one can check the End Notes as ones goes. I read it straight through, and found the Notes almost as valuable as the text, but I had to refer back to the text often to grasp the full intent of the Notes.
Refreshing, honest, direct: a great companion to Dawkins and Dennett, or a delightful introduction to science based morality for those who have only experienced Faith anchored holiness.

Better Than A Compromise

It seems as if any current debate on the topic of morality is confused and derailed by a strong polarization around the extremes.

One end of the spectrum is inhabited by those who are certain of an absolute moral truth, usually one that has been established and pronounced by a supernatural Creator of their choosing ? a piercing, precise, unyielding laser of exact specification. At the other end we see those who maintain, just as vehemently, that right and wrong only exist within a specific cultural context and, as such, shed no useful illumination on any other -- a flickering, low-watt, incandescent light bulb of moral relativism that provides no clarity on the topic.

Those who witness these extremes views may find them both to be out of touch with reality or lacking utility in the real world and may be tempted to try and mediate a balance between them -- a middle ground where a constructive dialog might take place -- but there really doesn?t seem to be one. The more one side pulls the rope toward an exclusive absolutism, the more vigorously the other pulls it toward an all-inclusive acceptance of a wider and wider set of often-conflicting values, and vice versa.

However, in Sam Harris? ?The Moral Landscape?, we find that there is actually something better than a compromise between the two extremes; not a middle ground at all, but the entirely over-arching, superseding matter of human well being. If we step back from the fray for a moment, we see that our well being really should be the guiding light for any discussion of morality.

The laser is too narrowly focused; the light bulb, too dim and diffused. The notion of well being provides an adequate source of light that exposes those at the extremes for their timid foolishness and utter lack of empathy and compassion. Employing it, we see the religious right rattling on about "evils" such as homosexuality and masturbation without any obligation to explain exactly whose well being might be diminished by either practice. And by it, we see intellectual liberals defending barbaric practices like female circumcision (though this clearly does diminish the well being of millions of young women), preferring to give precedence to the misguided notion that it is improper or impolite to denigrate the moral constructs of another culture.

Though they use different deflectors -- one uses an alleged far-future suffering that will result from a missed after-life, and the other uses an exaggerated devotion to tolerance -- they both ignore suffering in the here and now. It seems suddenly obvious that any moral compass lacking a view toward well being will lead us nowhere that we want to go.

To the absolutists we should be asking, how will a person experiencing a harmless private pleasure (either by themselves or with the partner of their choosing) decrease global well being? To the relativists we should be asking, how will tolerance of the archaic and barbaric practices of other cultures increase global well being? If their answer is anything but the admissive "It won't", we should feel perfectly free to conclude that they will provide no useful contribution to this important discussion (in the same way that we exclude potential jurists from participating in trials about which they have clear bias.)

In addition, using well being to temper the debate allows us to bring the conversation to a much saner and much more productive level because, as he points out, well being is certainly a matter of how our brains respond to facts in the real world. As such, it is in the realm of science and may be studied and evaluated. This is most exciting because it means that we can make some sound declarations and ? dare I say it ? even draft public policy on the basis of how we might best increase our potential for well being.

Sam Harris guides us toward opening our minds to the possibility that we can, actually and practically, understand how best to promote well being and that, if we accept that we should apply energy to this endeavor (how could we not?), we can also begin making strong, uniform statements against cruel and brutal practices and against discrimination directed toward individual preferences that are benign to the world at large -- just as the practice of slavery is now widely understood to be flatly wrong -- and in favor of beliefs and practices that give the widest swath of society the best chance to live happy, fulfilled lives.