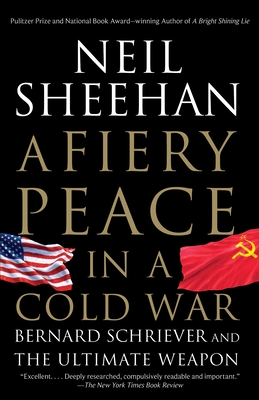 A Fiery Peace in a Cold War: Bernard Schriever and the Ultimate Weapon

From the author of the Pulitzer Prize-winning "A Bright Shining Lie" comes this behind-the-scenes story of the nuclear arms race--and of the visionary American Air Force officer Bernard Schriever, who led the effort to prevent the Soviet Union from acquiring nuclear superiority. Read More

From the author of the Pulitzer Prize-winning "A Bright Shining Lie" comes this behind-the-scenes story of the nuclear arms race--and of the visionary American Air Force officer Bernard Schriever, who led the effort to prevent the Soviet Union from acquiring nuclear superiority. Read Less

All Editions of A Fiery Peace in a Cold War: Bernard Schriever and the Ultimate Weapon

The Pentagon Papers: The Secret History of the Vietnam War

After the War Was Over: Hanoi and Saigon

Grey Eminence: Fox Conner and the Art of Mentorship

Arsenals of Folly: The Making of the Nuclear Arms Race

The Coldest Winter: America and the Korean War

The 900 Days: The Siege of Leningrad

This book fits into a couple of different categories. The subtitle ?Bernard Schriever and the Ultimate Weapon? leads one in the direction of a biography and it is, in part. However, it is not a single biography as it contains ?mini? biographies of several individuals of men connected to the development of the ICBM (both in the US and in the then USSR) and that were connected, directly or indirectly, to General Schriever?s programs and life. These are men one seldom hears of but were crucial to the development of the ICBM: Theodore von Kármán, John von Neumann, Trevor Gardner, Simon Ramo, Dean Wooldridge, Sergei Korolev, and a host of others. ?A Fiery Peace in a Cold War? is also part military history; Sheehan provides a synopsis of World War II and a bit on the German rocket program. A study on the difficulties of getting new technology accepted and new programs initiated and supported is also gleaned from this work. Part of this difficulty arises from dealing with old school, traditional leaders (for some of which Sheehan provides biographic information) and the other from inter-service rivalry. [Both of which still create problems.] Just before the epilogue (which includes a lengthy description of Schriever?s funeral) several pages are devoted to the Cuban Missile Crisis which is the last of several other diplomatic episodes diplomatic episodes discussed in this work.
What ties the book together is the relationship of individuals to the late Gen. Bernard Schriever, a disciple of Henry ?Hap? Arnold, the only individual to hold five-star rank in two services, and the development of the ICBM. Schriever developed a vision and had a knack for choosing the right people for the positions needing to be filled and the work to be done. He would not back down from defending what he thought was right, standing up to senior officers and politicians regardless of the possible damage to his career. Fortunately, he also had supporters in high places that would back him up. He, in turn, had his own group of subordinates that were like him ? bold, clever, and willing to take the initiative and who he backed up.
The book is not strictly chronological and Sheehan sometimes goes back a few years in his discussions yet he generally keeps within the decade or so that the majority of the book covers. There are 82 ?chapters? divided into seven books and an epilogue and. What one might term a contradiction occurs when comparing a statement in Chapter 15 when Sheehan posits that a mis-reading of Stalin led to the Cold War. However, later, in Chapter 18, he mentions that Andrei Sakharov (father of USSR?s H-bomb) noted in his memoirs he was certain Stalin would not have reciprocated any American restraint in creating the hydrogen bomb. Perhaps as a result of his book on Vietnam, Sheehan, in Chapter 45, in essence says America?s anti-communist theology got in the way of perceiving reality and led to the disastrous consequences of Vietnam War. Though I can agree with Sheehan?s view on America?s anti-communist theology I have difficulty believing Stalin was mis-read.
Having just read the 1986 winner of the Pulitzer Prize for History ? ?The Heavens and the Earth: A Political History of the Space Age? by Walter A. McDougall, I am surprised Sheehan did not mention the discussions of international law relating to the question of surveillance from space. Once Sputnik was up, the Soviets could not complain about satellites flying over their territory.
While many of us are familiar with the ?heroes? of space flight, e.g. Neil Armstrong, Yuri Gagarin and Sally Ride, few people know of those who made space flight possible. Individuals like Gen. Schriever, Theodore von Kármán, John von Neumann, Trevor Gardner, Simon Ramo, Dean Wooldridge, Ed Hall, and Sergei Korolev and his team of Soviet scientists, who provided the means by which the astronauts could go into space. This work makes us aware of those individuals and those programs while providing an informative introduction to Cold War history and the development of the ICBM.
?Fiery Peace in a Cold War? is an easily read narrative history, rather than footnotes or endnotes Sheehan has a section titled Source Notes revealing he did a lot of interviews for this work, primary sources, and lists their names with a majority described as USAF (Ret.) Sheehan has also included a rather lengthy bibliography (which includes McDougall?s work).
Available in bookstores on 22 September 2009.